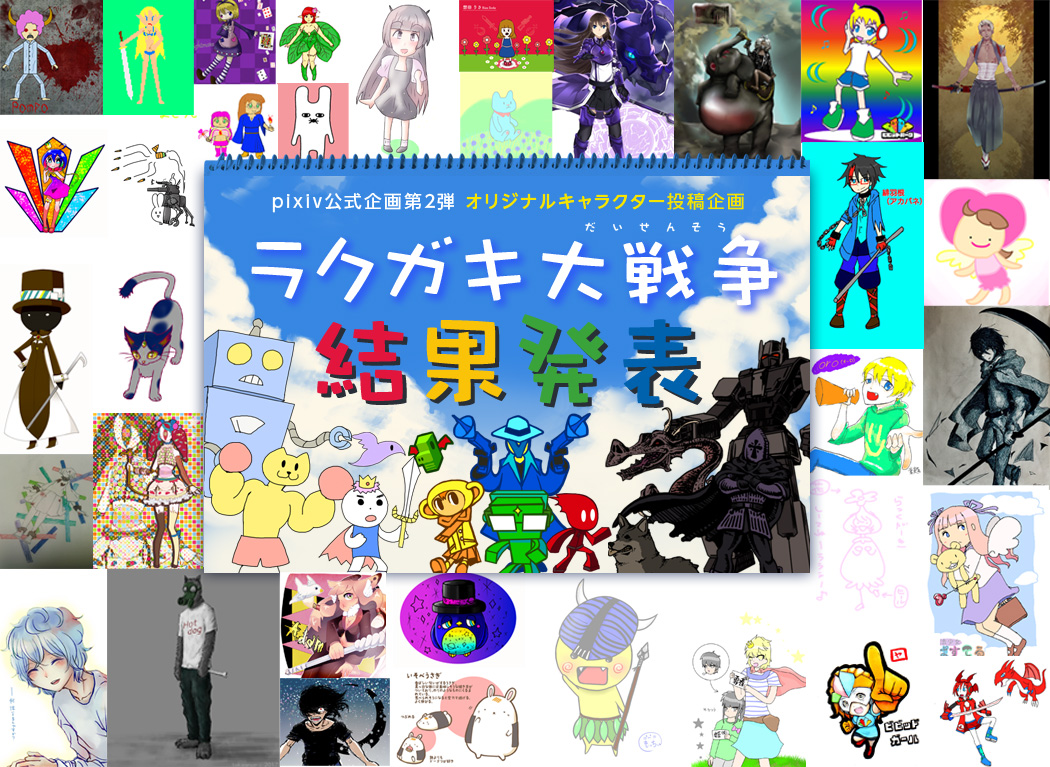 These are the results for Doodle Battle, the latest pixiv original contest which was held between June 8th ~ 26th 2017! 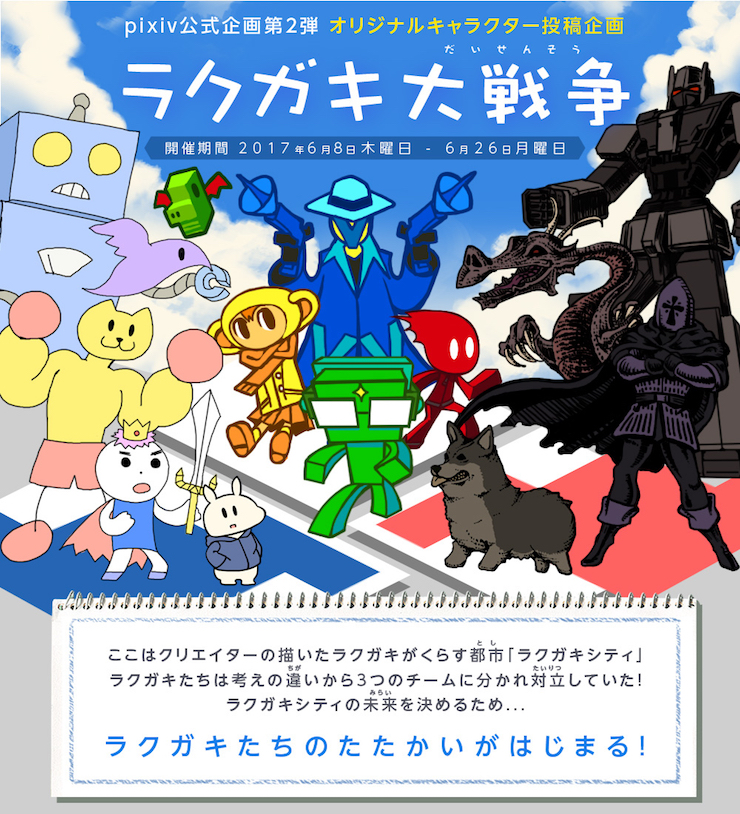 Overview:
In this pixiv original contest, participants challenge each other on the stage of Doodle City. Users can select their favorite faction among dark, vivid and pastel, each coming with its very own color scheme. The winning team is then chosen depending on the total number of bookmarks that the team members' submissions receive!

・Dark Town, for those using dark colors
Each user can affiliate with a team and post their submissions!

The Prizes:
Apart from the winning team, we are going to distribute a number of awards for many different categories!

The point of this contest was the opportunity to rearrange original characters from other users, redrawing them in your style and with your favorite color scheme. In other words, users had the chance to see fan art of their original characters! What an amazing experience, don't you think? 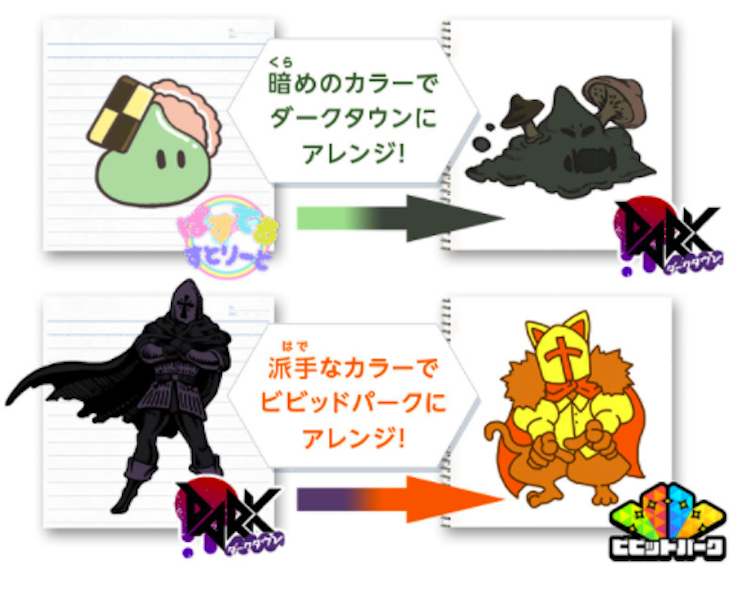 ▲ This pixiv contest makes use of the pixiv function "Image Response" (let yourself be inspired by the original illustration and draw a new one)!

Rewarding not only teams, but also single illustrations!

Apart from the winning team prizes, we prepared many more in order to reward single illustrations as well.

Check out the awards here:

An award for the illustration that got the most attention/bookmarks in each team.

An award for amazing renditions of other users' characters.

An award for works based on unique ideas.

An award for... You'll find out at the end of the article!

Which submissions are going to receive the special awards? Which team is going to celebrate a well-deserved victory?

Are you ready for the results of pixiv original contest Doodle Battle?

Let's start by announcing the winning team, which brought home the highest number of bookmarks! 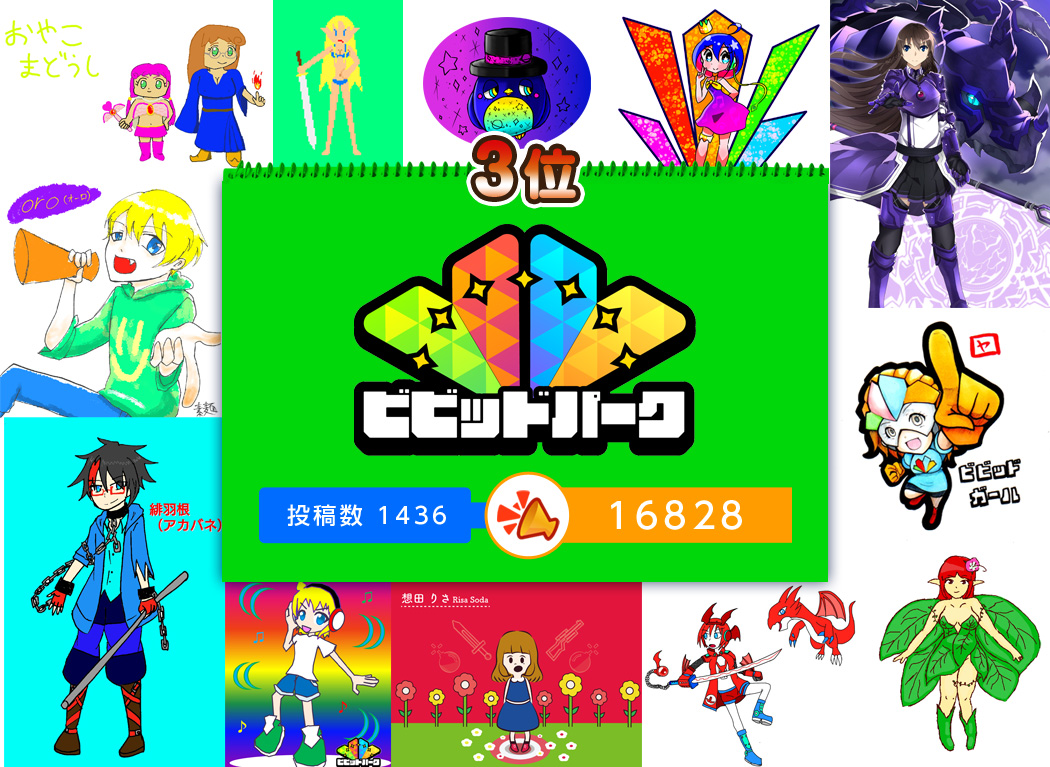 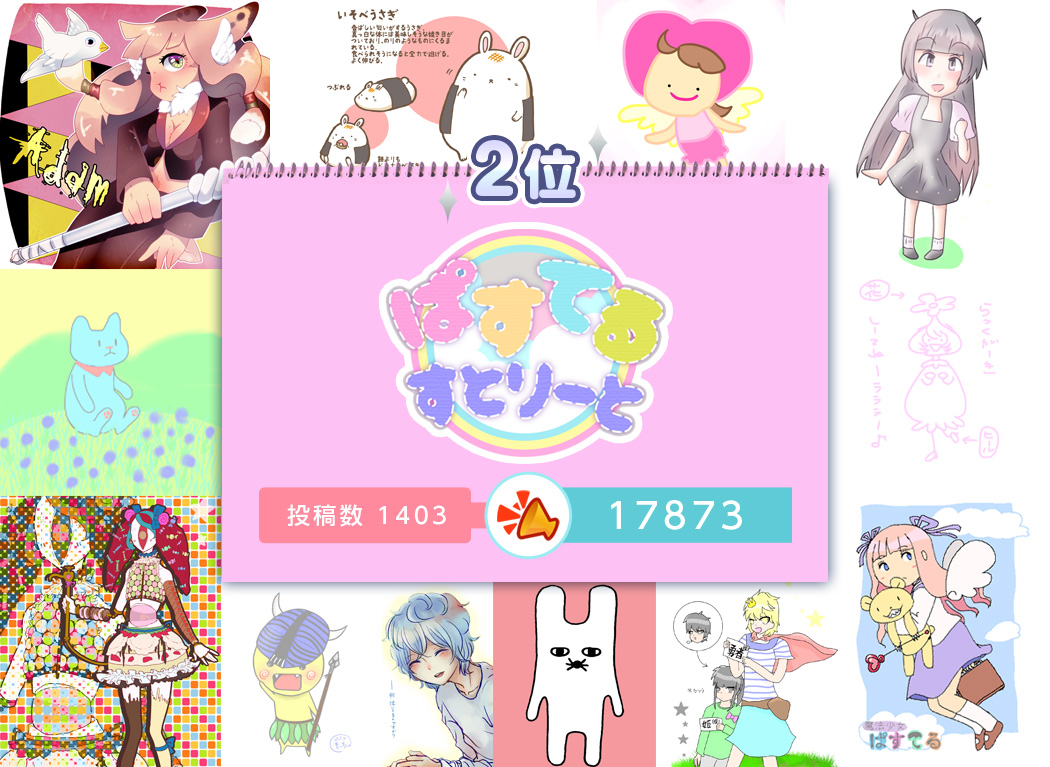 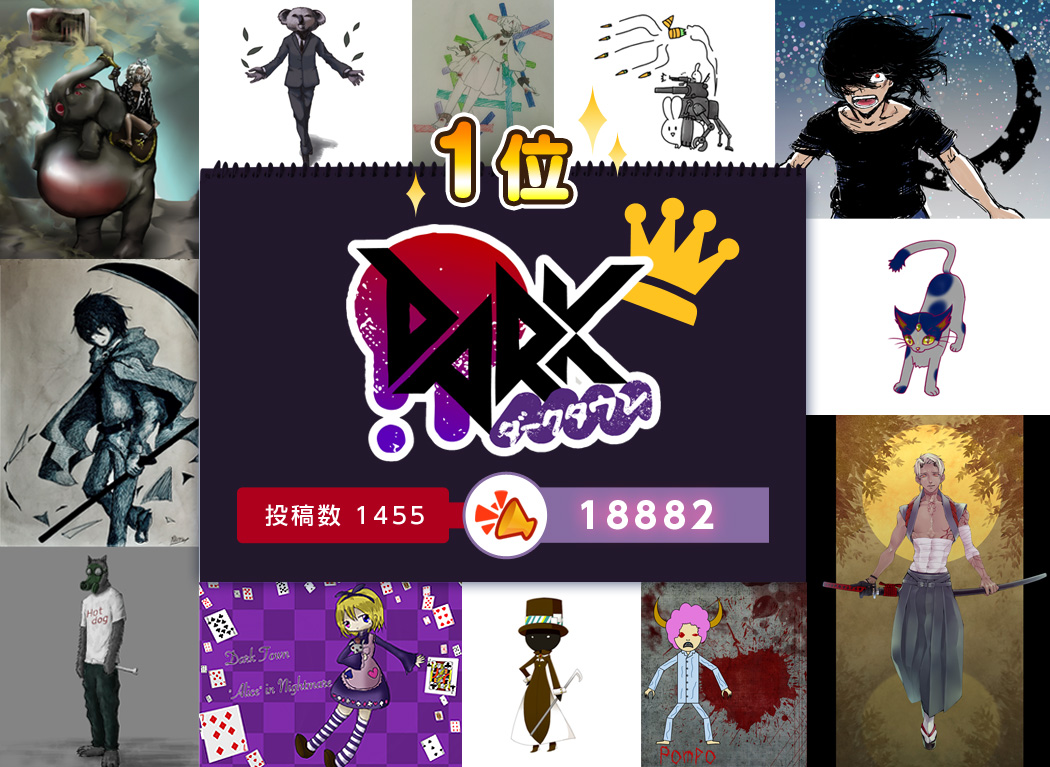 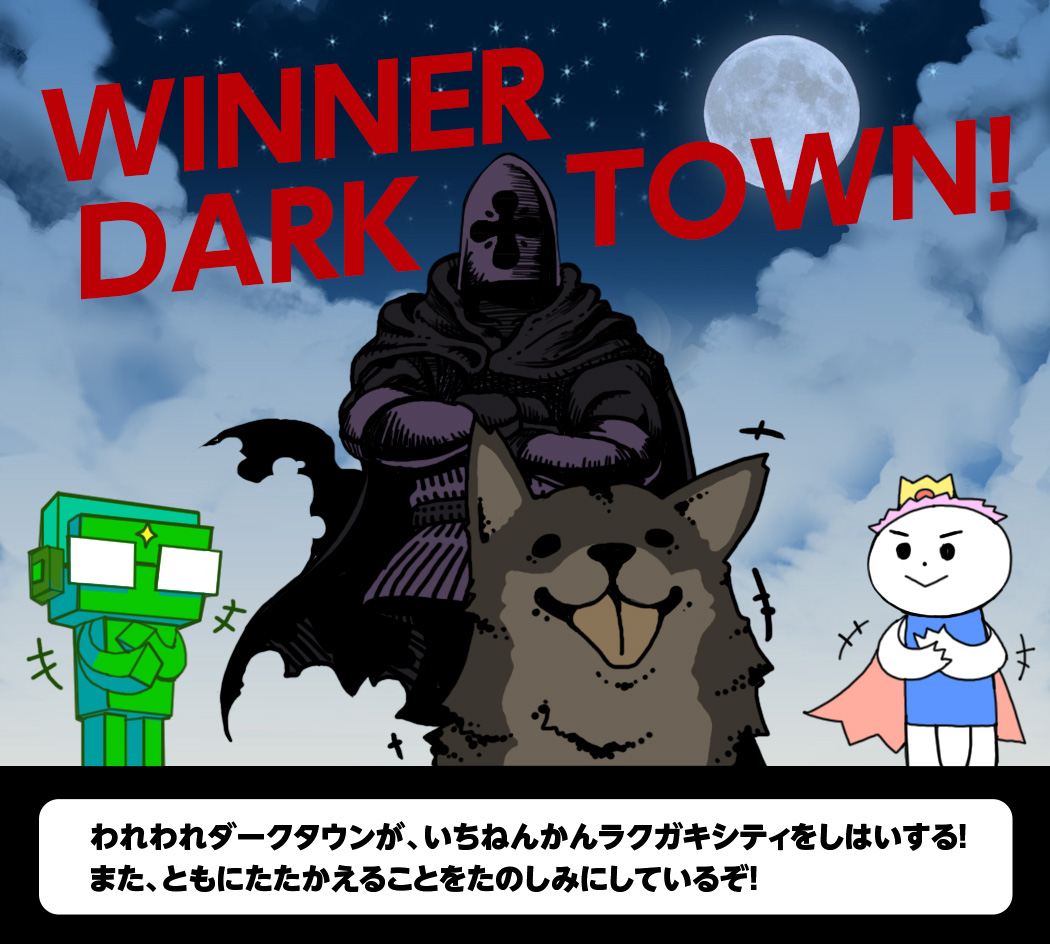 ▲ The image says: "Dark Town was the winner this year". This year? Does it mean there's gonna be another round...?
Congratulations to all users who affiliated with Dark Town!
Let's now announce the winner of the remaining awards, starting from each team's MVP!

You are the ace! What's the MVP submission from each team?

We will now announce each team's MVP, the submission that drew the most attention and got the highest number of submissions in each neighborhood.

Congratulations to the winners of the MVP Award!

Let's proceed with the Befriend Award!

A retake that bursts with originality! Befriend Awards

The user 九州外伝 managed to equip the character with some unique weapons and successfully made it into a member of Vivid Park! User あおうさぎ/UKKO, on the other side, turned those weapons in food-dispensing cardboards and made the same character a proud member of Pastel Street.
Thanks to the amazing skills of these creators, the original illustration got plenty of amazing tributes. Congratulations on winning the Befriend Award!

Let's move on to the winners of the Idea Awards!

There were so many great ideas that the pixiv official contest team created a number of different awards, each with its very own name. Take a look!

Never Thought This Would Win An Award

Congratulations to all those who manage to bring home one of the many Idea Awards!

And now, for the Special Awards...

The total number of submissions in this Doodle Battle was 4,271, and users bookmarked these illustrations 53,488 times in total (※).
Thanks to all creators who posted their work and to all users who participated this contest, we managed to pull it off successfully.
We decided to assign a Special Award to the three users that posted the highest number of image responses. Check them out!

3rd place: H2(えいちに)
※ The total refers to submissions posted with the tag of any of the teams.

If you want to see more, head out to pixiv!

Thanks to all those who posted their original characters and participated to pixiv official contest Doodle Battle! It looks like, through this contest, people could pull off an amazing art exchange through image responses. If you want to learn more, please check out pixiv!

We are currently planning many more exciting contests to be held on pixiv, so please look forward to them! We hope you'll keep using pixiv in the future.