詳細
Yor Forger has attracted a lot of attention. She’s one of the three tritagonists in the critically acclaimed manga SPY x FAMILY, which has a currently airing anime adaptation.

Who is Yor Forger?

For the sake of convenience and to soothe her younger brother Yuri’s worries, she marries Loid Forger, who is also looking for a wife. While their marriage may be a sham, Yor also becomes the adoptive mother of telepath Anya Forger and the two grow close.

Beneath the surface, however, lies a deadly secret. Yor's true identity is that of a highly-skilled assassin for a secret organization in the East, operating under the code name "Thorn Princess".

While carrying out her duties, she wears a rose hair ornament, a sensuous black dress, and thigh-high boots. Her weapons of choice are a pair of thin needle-like daggers. Between those and her superhuman bare-knuckle fighting skills, nothing seems to be an obstacle too great for her. Even if she drinks a lethal poison, her physical abilities are only slightly dulled.

That being said, she isn't great when it comes to holding her liquor…

Despite the family's less than legitimate beginnings, Yor's trust in her new husband Loid, and her healthy but clumsy efforts to treat her daughter Anya as a mother are heartwarming. At the same time, however, she ruthlessly buries the enemies of the East in the darkness as ordered.

The gap between her natural, friendly appearance when spending time with her family and her intense and nonchalant killing side is huge. This seems to be how she's managed to steal the hearts of many of the anime's viewers. Her debut in the second episode brought her a massive jump in popularity on pixiv, both within Japan and abroad. 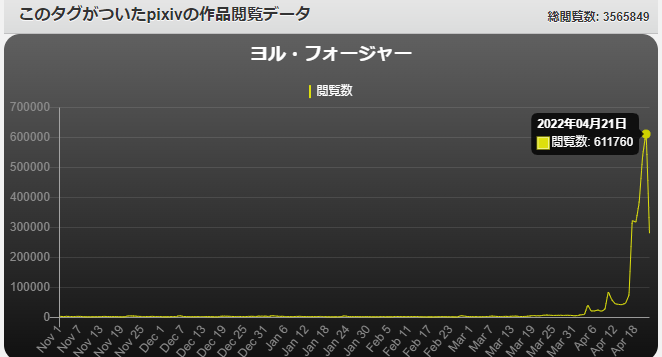 Number of views on pixiv as of April 22, 2022 (upper image) and the popularity ranking among male users in Creative Ideas (bottom image)

And now for a look at the fan art of Yor!

by spray and pray