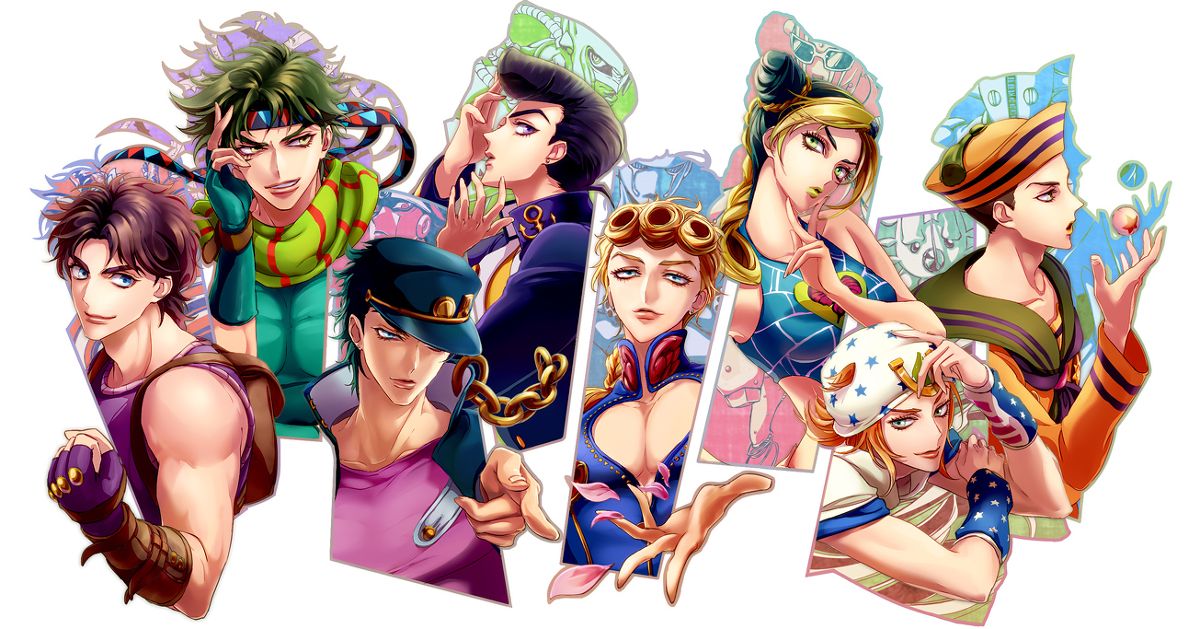 There are few fans of manga and anime who haven’t at least heard of the Joestar family, or the name “JoJo”. JoJo’s Bizarre Adventure is one of Weekly Shonen Jump’s best-selling and best-recognized works of all time. With its one-of-a-kind art style and a wild cavalcade of unique characters with equally unique abilities, it’s not hard to see why.

The manga, which debuted 35 years ago on January 1, 1987, currently spans eight arcs over 131 volumes and shows absolutely no signs of slowing down. It has also gone on to inspire an anime series, a live-action film, light novels, and even video games, the most recent of which, JoJo’s Bizarre Adventure: All-Star Battle R hit stores on September 1st, 2022.

The Briefest of Summaries to an Iconic Tale...

While the story’s first six arcs stem from the rivalry between Jonathan and his adopted brother Dio Brando, arcs seven and eight take place in an alternate timeline, in which many changes to the Joestar family tree are made.

Arc nine, tentatively titled JOJOLANDS, was confirmed by creator Hirohiko Araki to be coming down the pipelines following a short break. Suffice to say, fans were absolutely ecstatic about the news and are eagerly awaiting to see just what Araki has in store for his madcap manga.

Have a look and see which ones really stand the test of time.

The main character of the manga’s first story arc, Phantom Blood, Jonathan is the son of a wealthy landowner in late 19th-century England. His role as heir to the family fortune is challenged by the sudden arrival of his adopted brother Dio Brando, who hates his guts. To stop his brother, who now has world domination on his mind, Jonathan travels and masters the Ripple fighting techniques, hoping to bring Dio down once and for all.

The main character of the manga’s second arc, Battle Tendency, Joseph is Jonathan’s grandson. Although they’re strikingly similar in appearance, that’s where the similarities end as Joseph is cockier and more rebellious than Jonathan ever was. He’s also more likely to make use of his brain than his brawn, preferring to use mind games to bring down his opponents. He returns in the manga’s third arc, Stardust Crusaders, where he acquires his Stand, Hermit Purple, which he either uses to fight or make predictions of the future via technological devices.

The main character for the manga’s third arc, Stardust Crusaders, Jotaro is the rough-around-the-edges grandson of Joseph Joestar who has traveled from Japan to Egypt to battle against the family’s sworn enemy, Dio Brando. His Stand, called Star Platinum, boasts incredible speed, precision, and power.

The main character of the manga’s fourth arc, Diamond is Unbreakable, Josuke is Joseph’s gentle-hearted illegitimate son. His Stand, Crazy Diamond, has a healing power he can use to revert things around them to their previous forms, or even heal the people around him. The only limitations are that he cannot use this power on himself or revive the dead.

The main character of the manga’s fifth arc, Golden Wind, Giorno is the illegitimate son of the Joestar family’s greatest enemy, Dio Brando. While his membership within the Joestar family actually hinges on a technicality surrounding the way he was conceived, he does bear the Joestar family birthmark. He has personality traits that are similar to both Dio and Jonathan, which causes Jotaro to keep a close eye on him, just in case.

The main character of the manga’s sixth arc, Stone Ocean, Jolyne is the estranged daughter of Jotaro who makes it her mission to help recover his stolen memory and Stand. Her Stand, Stone Free, allows her to stretch her body into an elastic-yet-fragile thread that, when combined, can form a powerful and durable humanoid Stand.

The main character of the manga’s seventh arc, Steel Ball Run, Johnny is a Kentucky-born, former horse-racing prodigy who suffered an injury that left him paralyzed from the waist down. He eventually develops his own Stand, Tusk, which initially allows him to shoot his fingernails at people but over time develops into one of the most powerful Stands in the arc. In this rebooted timeline, Johnny is revealed to become an ancestor to his universe’s “Joseph Joestar”.

The main character of the manga’s eighth and most recent arc, JoJolion, which takes place in the same rebooted universe as Steel Ball Run. Due to a series of tragic events, Josuke winds up losing memories of his past and origins and is taken into the care of the Higashikata family, who gave him the name Josuke. His Stand, Soft and Wet, creates bubbles that allow him to take aspects of an object, like the friction of the floor or a person’s eyesight, and use them for other purposes. His journey to discover who he is may lead him to places he’d never imagined he’d go.