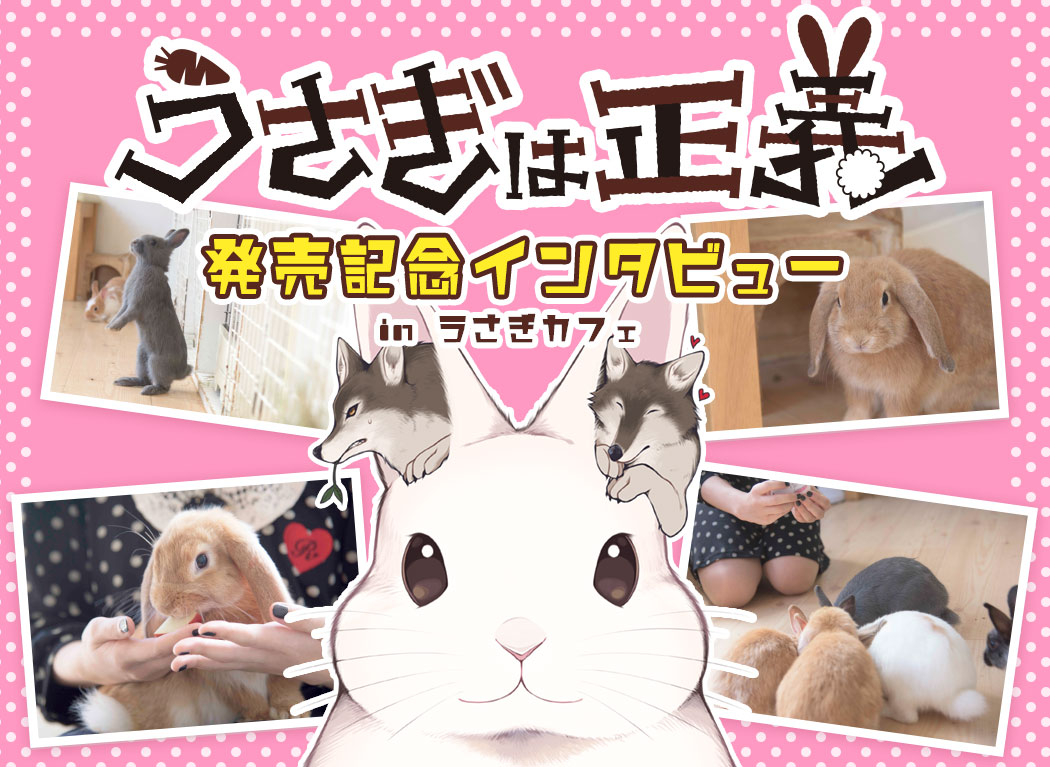 “The cutest poops in the world are rabbit poops!” … according to Ikuchibyouin, creator of Usagi wa Seigi, available on comic e-zine Hug pixiv (which is available on pixiv Comic), and also the owner of bone-poppingly cute pet rabbit named “Popotamu-sama (*).”

We’re also getting a chance for an interview with Ikuchibyouin on the occasion of the recent release of her complied comic (to be serialized under the new label Liluct Comics). As a reprieve from the work involved in the process, we’ve come to a bona fide “bunny cafe” here in the city, so that we can conduct the interview all while getting to stroke adorable rabbits.

*”Popotamu-sama” is merely a nickname. Its legal name is “Tanpopo-chan.”

The Queen of the house: Ikuchibyouin’s rabbit love 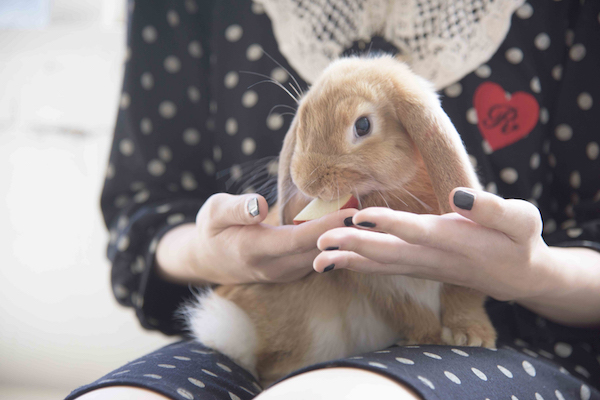 - Thank you for taking the time today! Rabbits often star in your works, including Usagi wa Seigi -- when did your obsession with rabbits begin?

I started drawing comics and illustrations with rabbits 2 or 3 years ago, but I’ve been a rabbit owner since about 8 years ago. A long time ago, I was a cat lover, but before I knew it, I had awakened to my love for rabbits. 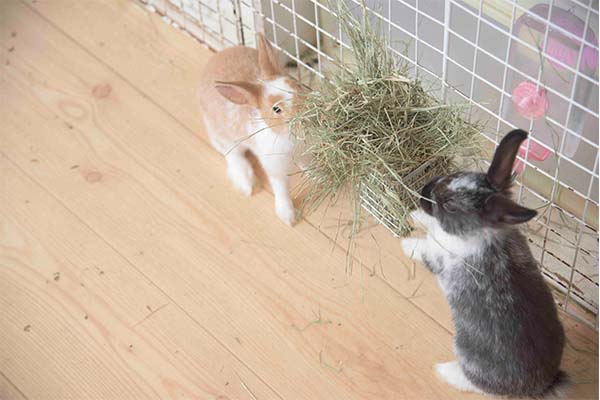 - What do you think is so appealing about them?

Well, they’re cute no matter how you look at them. They can be haughty and moody, which is adorable. No matter how they treat you back, I think I find it endearing…

- Is your Popotamu-sama haughty as well?

She’s practically a queen. When she gets hungry, she’ll bite and stamp her feet to be fed, in a proud, demanding way. 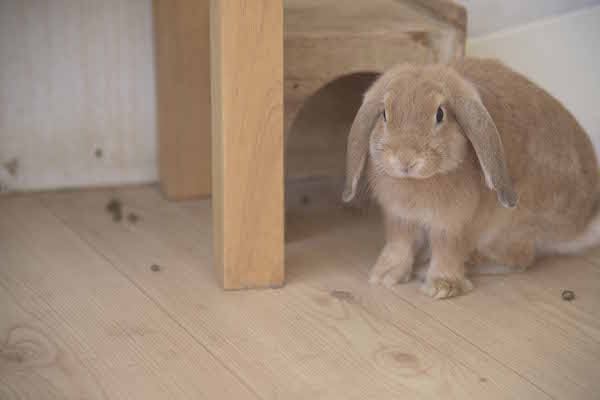 - That’s… quite the reversal.

They say rabbits are difficult to train; supposedly, they don’t remember many things. So a poorly trained rabbit is the fault of the owner. It’s too late: you’re now its slave. I didn’t housebreak Popotamu-sama properly, and now she believes my entire room to be her territory.

- So you’re saying there’s droppings all over your floor…?

Droppings come with the territory with rabbits. Rabbits are also cecotropes, after all. But anybody who likes rabbits learns to not mind their poop. I believe the cutest poops in the world are rabbit poops. 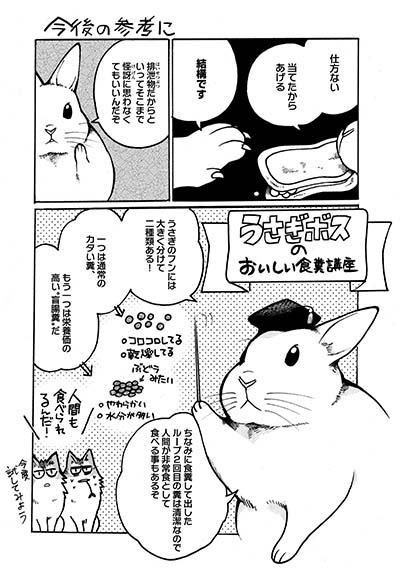 - That’s quite the level of commitment…! Your unbridled passion for rabbits is apparent.

Honestly though, it’s a one-sided love. I’m pretty sure I’m just a tolerated existence since I feed them. Once, when I went on a trip for 2 days, I came back and they couldn’t have cared less, probably being like “Who are you?” and having forgot about me... 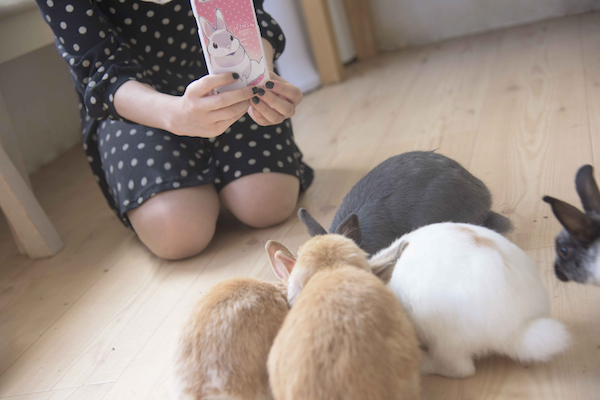 ▲ The rabbits swarming at the sight of apples. We got to witness the feeding frenzy of the rabbits…!

But when my dad or other men get close, they growl and reject them, none of which they do around me, so I take it as them not hating me, at least. That’s enough to make me happy.

- Do you portray your such beloved rabbits in any special way when you draw them then?

The truth is I think everything about them is worth drawing, but I try to draw them faithfully to real life. I can play around with the characterization--be it anthropomorphising or deforming them--but I still think the best way is to draw how wonderful they are on their own. 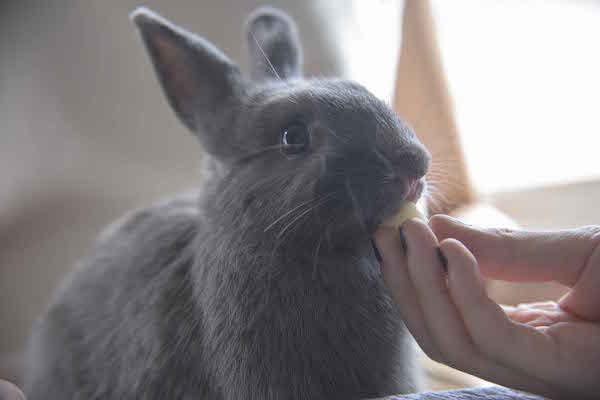 I sometimes make the rabbit characters with paw pads, but real rabbits don’t really have those, or they’re too fluffy to see properly. I also love how fluffy those feet are, so I try and depict that faithfully as well.

- It is true, your rabbits are drawn very realistically.

In order to draw faithfully, I actually draw while observing Popotamu-sama. Obviously, deformed versions are cute and easier to adapt to story situations, but the original is so cute, I feel like I should stay close to it.

- Are there any hard parts of drawing them so realistically?

Rabbits are very unexpressive, so it’s really hard to show differences in their emotions. I might furrow their brows or raise the sides of their mouths a bit. 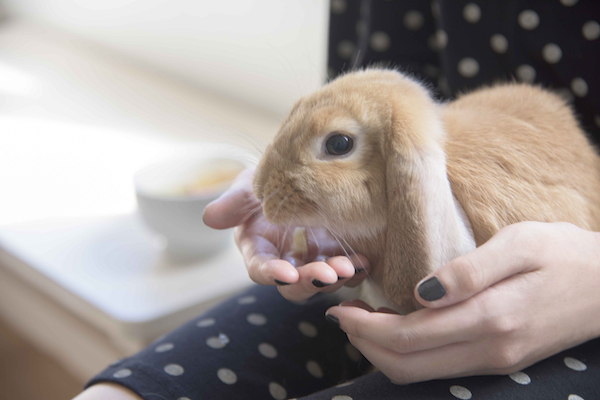 - Tell us about yourself. When did you get into drawing?

I’ve loved drawing as long as I can remember. I knew I always wanted to be an illustrator or a mangaka. Somehow, filling my sketchbook with Voltorbs from Pokémon became a daily task. (lol) I liked the look of those eyes.

- Those eyes were what made it unique, I guess. (lol) Are there any other characters or works that influenced you?

I read a lot of picture books with animals with them. In particular, I liked Akiko Ikeda’s “Neko no Dayan” series. I also watched a lot of Disney and Pixar movies. My favorite was Randall, the villain from Monsters, Inc. There’s just something appealing about how eyes like those are set. The first drawing I put on the internet, too, was a picture of Randall.

I like to imagine a lot, so I’ve come to not relate well to typical Japanese anime and manga characters--they’re a little too perfect. I’m more into foreign animation. I’ve recently also been getting into Phineas and Ferb and Gravity Falls.

- What made you decide to upload your artwork to the internet?

We created a manga club in high school, but other than a making a couple of club magazines, we spent most of the time reading just lazily reading comics. I thought that was a waste, so one day, I thought I’d draw something with the intent to upload it to pixiv, and that’s when it started.

- How was the reaction from people around you when you first made your drawings public?

When I first started, I was happy if even one person bookmarked my picture. I’d even write in my journal how many more bookmarks I got! (lol) I’m very conscious about people’s opinions. If I get a 8 out of 10, I’d focus on the 2 that I didn’t get and wonder what was lacking.

- Most people would be happy with an 8 out of 10--I guess that speaks to your enthusiasm!

I’m pretty ambitious and I hate to lose. I think about how other people--with busy day jobs--still manage to put out really amazing artwork, but for me, I think, “this is all I do, so I can’t lose to that.”

- How admirable! Though we know you’re quite busy as well with your many series. For example, don’t you ever get into a block when it comes to coming up with material?

Most of my works are rabbit-related, so no matter what I look at, I see rabbits in everything. If I go to a restaurant, I’ll wonder what the employees would look like as rabbits… that’s where my imagination tends to take me. 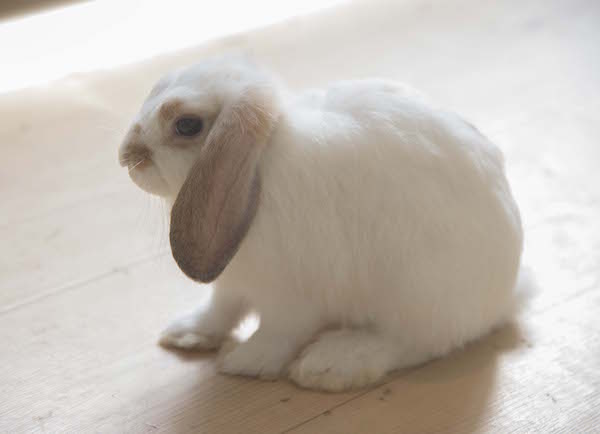 - In Usagi wa Seigi, a rabbit is the boss over a pair of wolves. Where did the idea for this come from?

It was just a wildly imaginative idea that came from thinking the disconnect between the sheer cuteness and the wolves would be funny. 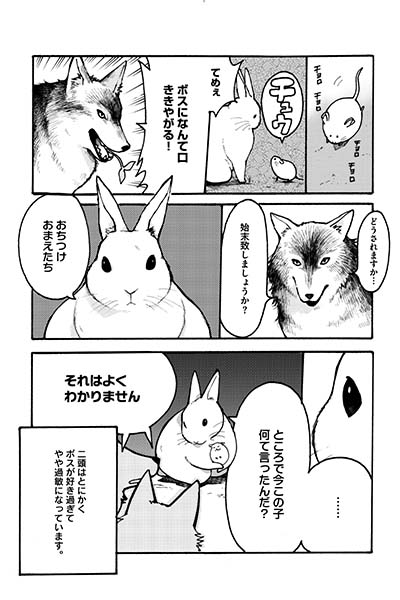 In an unrelated work, Shinnyuu wa Usagi, we see the dealings between a human senior employee to the junior rabbit. We let that rabbit off the hook for things that a human would never get away with because we think they’re cute, don’t we? (lol) 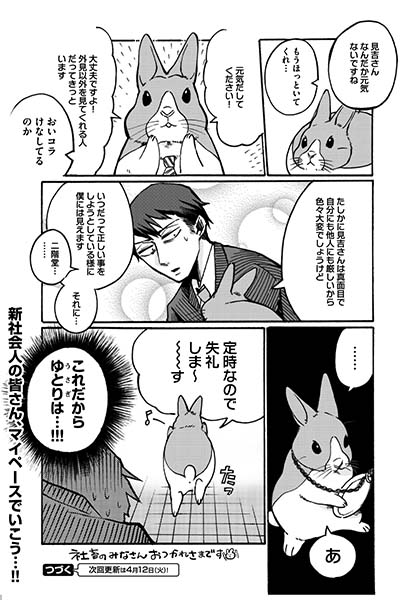 - Although your current stories are mainly rabbit stories, are there any ideas you’d like to explore in the future?

- It’s surprising, then, that you only make rabbit works.

But I think rabbits are like insects, in a way. Like moths--they’re both fuzzy. Also how rabbits’ eyes look kinda blank and inorganic, it reminds you of insects too. 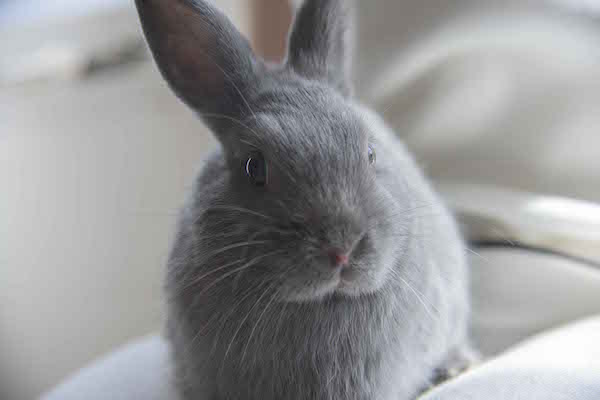 I sometimes bring it up with my editor too, and everyone says the same thing. But what if it were a BL (Yaoi) story about insects? I mean, there’s already a Kabutomushi x Kuwagata manga on pixiv. (lol) Insects are like blank slates with their lack of expression, so it would really let you be imaginative with them as a creator.

- You could be a pioneer in the field of insect BL…! Lastly, please share with us your thoughts on your newly-released compilation.

First, the cover is amazingly cute. I’d like everyone to appreciate the contrast between the cutesy cover and the bizarre content inside! Also, there are a ton of original drawings created for the compiled book that readers of the serial can enjoy for the first time. A lot of work went into this book, so please grab it if you have the chance!

- Thank you very much!

Creating something you love becomes motivation 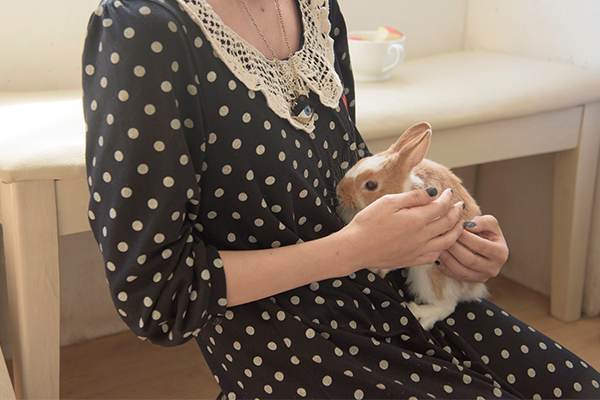 Ikuchibyouin’s overflowing love for rabbits, as we’ve plainly seen from her being right at home with them, is what’s behind the appeal and quality of her drawings. 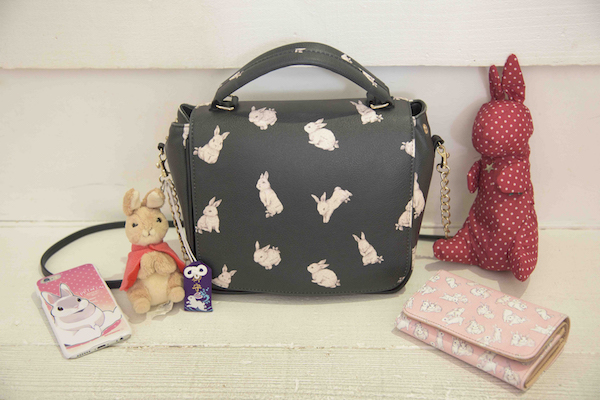 ▲ Even her belongings are all rabbit-themed! You can just feel the bunny love...

Her motivation for her work--beloved by many--apparently comes from the unyielding passion she has for her beloved rabbits. 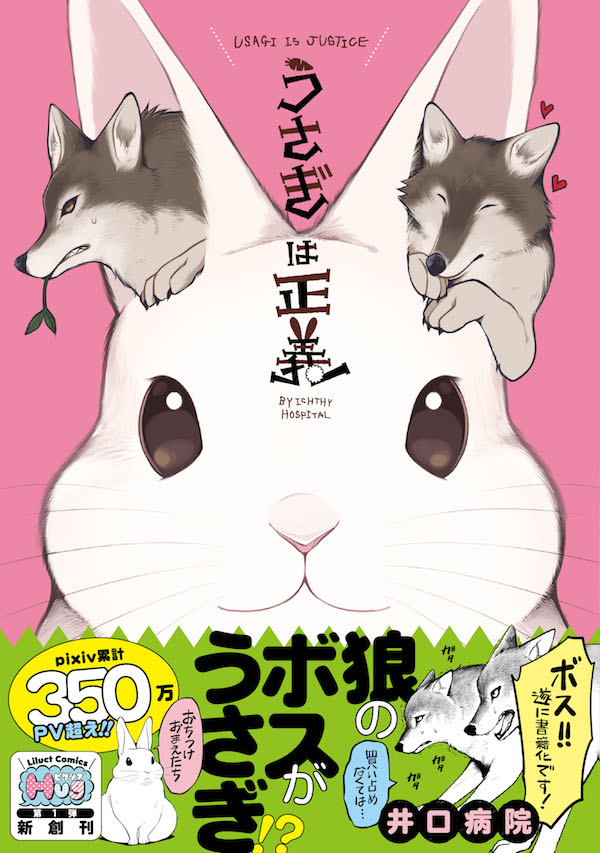 The compilation of Usagi wa Seigi, serialized on pixiv Comic, is published by new comic label Liluct Comics. Its cute art and bizarre story are sure to entertain!

You can buy it here! 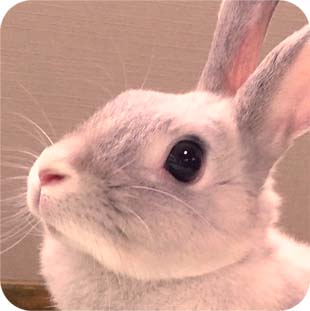 In cooperation with Usagi Cafe Ohisama 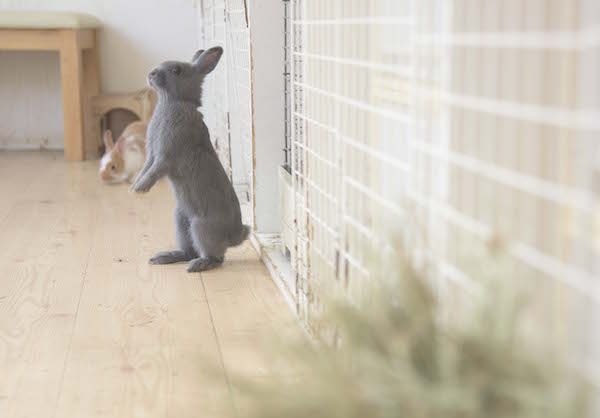