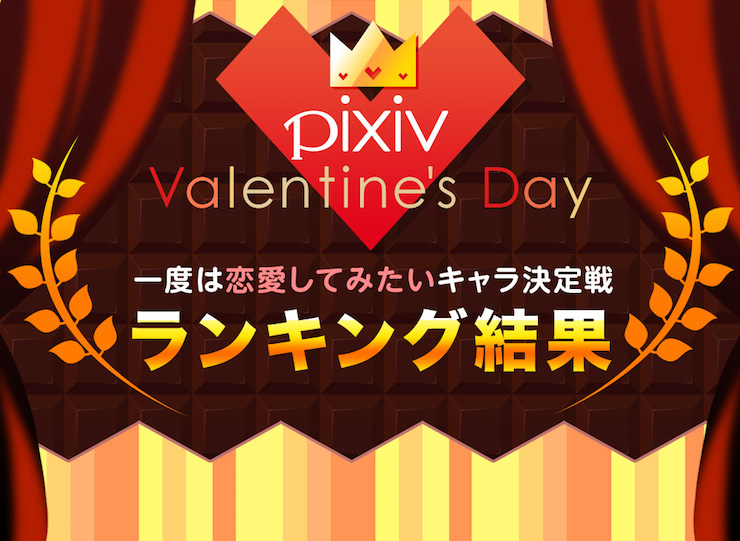 On Valentine's Day, people give chocolates to their beloved ones. It's a day that both boys and girls look forward to, and we're sure you too have many memories related to February 14th. Recently, it's become more and more common to give chocolates to popular anime and manga characters as well!

This is exactly where pixiv comes into play. In our Valentine's Day limited event, we reverse this popular trend and have your favorite characters give you chocolate! 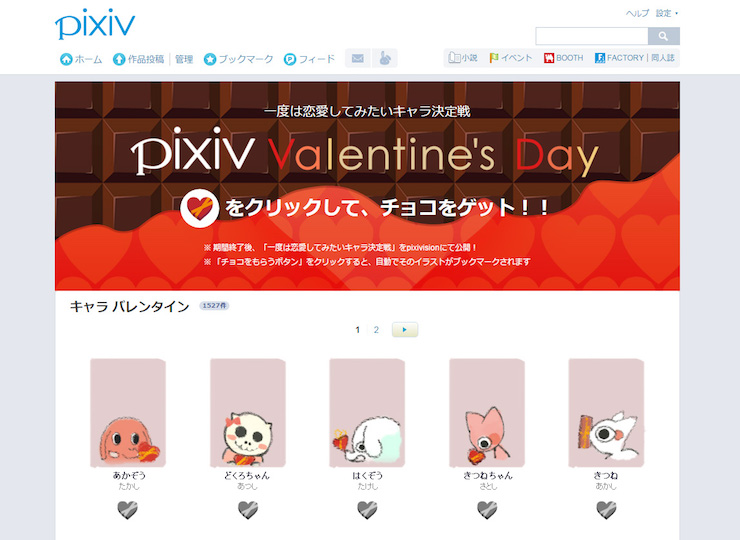 The special event held from Feb. 10th (Fri) until Feb. 17th (Fri) 2017.
You could receive chocolates from your favorite character by clicking on the "receive chocolate" button attached to illustrations posted on pixiv.
The total number of chocolates delivered in that 8 days period is over 430,000! We finally finished counting and the "Character I Want to Be In A Relationship With RANKING" is now ready!

Which character gifted the most chocolate on Valentine's Day? Who's pixiv all time favorite!? You're about to find out! Hasegawa from pixiv's staff, who took care of the event, will also leave us a comment on the artworks they liked the most!

Let's start from the male characters!

It looks like the most popular between the swordsmen of the Touken Ranbu series was Tsurumaru Kuninaga, who ranked 4th. Four characters from Osomatsu-san found a place in the top 10, while Kokichi Ouma from the brand new game Danganronpa V3: Killing Harmony ranked 9th. We can't help but wonder if his popularity will increase even more in the future!

Are you ready for the Top 3?

Hasegawa says: "The fact that he's licking his finger and his nude neck are just the best! I wish he would share his chocolate with me..."

Hasegawa says: "His eyes looking this way and that piece of chocolate in his mouth... I accidentally reached out to the screen of my PC!"

Hasegawa says: "The fact that Yuri is averting my eyes made want to stare at this illustration for quite a long time."
Even after the anime is over, Yuri on Ice is still on fire!! So much that two of the protagonists, Yuri Katsuki and Victor Nikiforov ranked at the top 2 positions of our chart. These are some results to remember!!

Also, VOCALOID star Kagamine Len ranked in like a meteor after the disappointing half-time results! It's quite surprising how this character could compete with grown adult men at the young age of 14.

Now, without further ado, let's proceed to the female department!

Three characters from Fate/GrandOrder are making an appearance in our Top 10, and the most popular seems to be Jeanne Alter. This year's new face is Kanna Kamui, from Miss Kobayashi's Dragon Maid. Although Kanna loves to eat, so we're kinda worried she might end up eating all the chocolate before gifting it...

Let's move on to the Female Top 3!

Hasegawa says: "Kashima looking sexy with her thighs out! I'm too overwhelmed with excitement. "

Hasegawa says: "Looking so cute with chocolate held close to her in the snowy cold winter day!"

Hasegawa says: "I was convinced that the expression of shame just before handing the chocolate is the real deal of Valentine ...! "
We're sure that all the admirals among you were really happy to read about these results, as Kantai Collection popular character Hamakaze actually made it to the top position!

Hamakaze is really good at cooking, so her hand-made chocolate must taste really good. Are you looking forward to opening the box? There's another KanColle character which made it to the Top 3: we're talking about Kashima, who ranked 3rd! They basically monopolized this chart!
Fate/GrandOrder popular character Mysterious Heroine X Alter loves sweets and likes to do things at her own pace. Maybe you could eat your chocolate together? 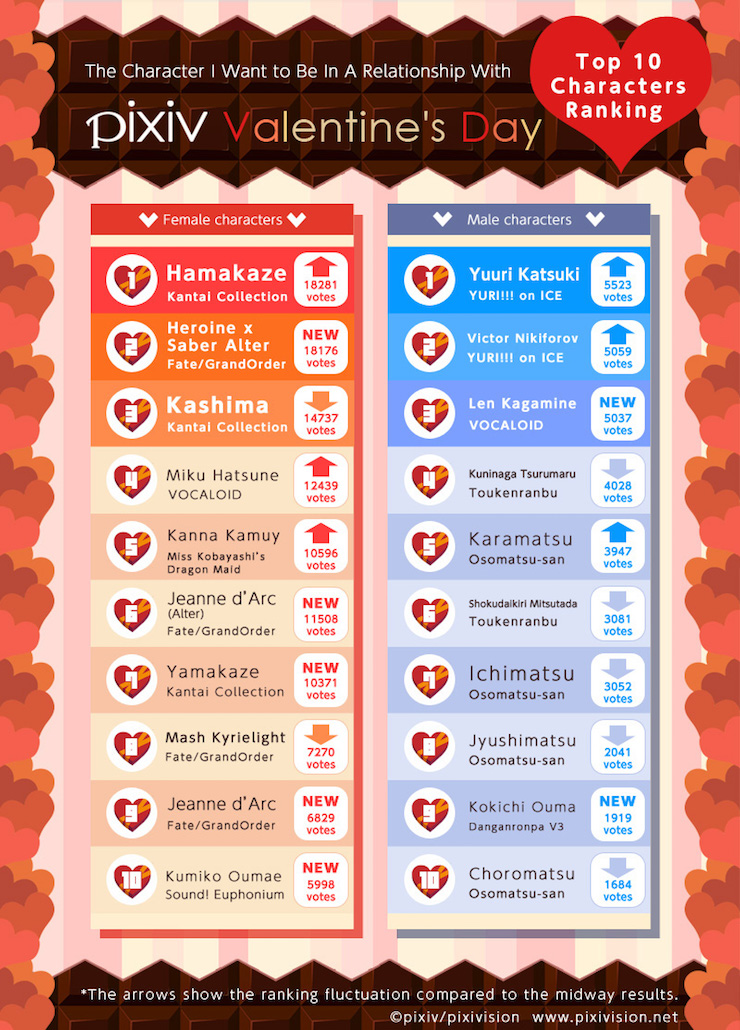 Popular characters who unfortunately didn't make it to the Top 10

As for the female characters category, apart from the ever-popular characters from the KanColle and Love Live! series, we feel the need to mention Kaede Akamatsu from Danganronpa V3: Killing Harmony and Megumin from KonoSuba.
On the other hand, multiple original characters were included in the Top 50 as well. It's nice to see that it's not only official characters who can be popular, but also fascinating new ones who were posted on pixiv from various artists!

Who's your favorite character?

Did you spot any character you would like to receive chocolate from? Or a character that you'd like to date one day?

The number of illustrations posted on pixiv for this year's Valentine's Day event was 6524 - a total record! We'd really like to thank all creators and voters who contributed to make this one a great event.

Please look forward to our upcoming projects too!