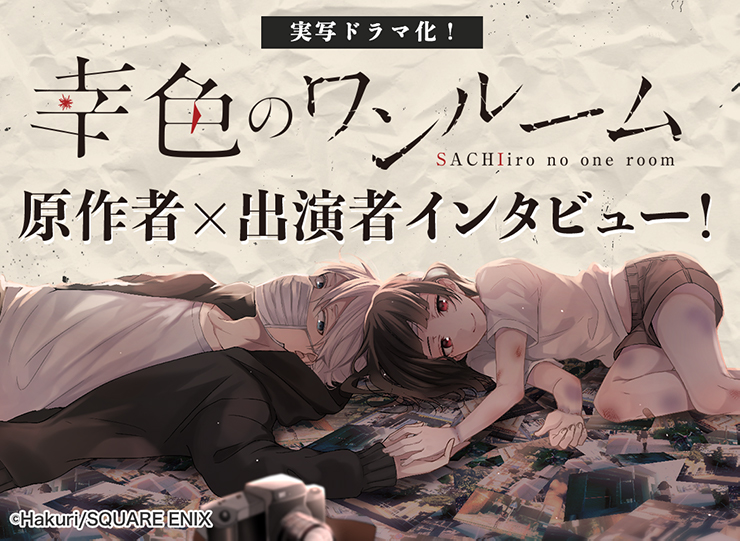 This is a story about a young girl who lives with her only hope, a man. Budding between them in a small one-room apartment is a warm bond, no matter how twisted and unforgivable it may be in the eyes of the society──

Offering a story that unfolds against such an unusual backdrop, "Sachi-iro no One Room" (幸色のワンルーム) is a manga series that will be aired as a live-action drama series this summer! How will the world and plot of the manga be transformed into moving images? We had a talk with the author Hakuri, Anna Yamada, the actress who portrayed "Sachi", and Shuhei Uesugi, the actor who portrayed the male lead "Onii-san".

── Let's start with Hakuri. What are your opinions on the looks of the cast?

Hakuri: (Since we're talking about a live adaptation) I thought the cast would be more different, but the two of them look just like the characters in the manga. When the cast was chosen, I already thought that they were pretty similar to the characters, but it turned out even better than I imagined! I think their looks are exactly like those of the manga characters. 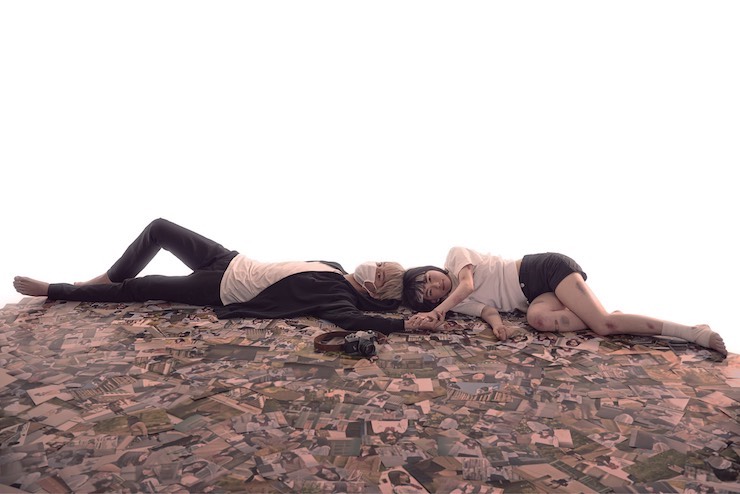 ── So the two of you have been approved by the author. Is there anything that you're mindful of while portraying the characters?

Yamada：I tried to look as similar as possible to my character by paying attention to my hairstyle or the bandage around my head. In terms of acting, I would come back to the manga time and time again and create my facial expressions accordingly.

Uesugi：I wanted to recreate the color of my character's hair, so I spent 6 hours dying it (laughs). Onii-san always has a mask on, so I try to be conscious of my expression, the way I sit, and my postures in order to be more like him.

Yamada：When posing for the scenes that are in the manga, we also try to recreate the two characters' sense of distance or body language.

Uesugi：That's right. During every photo shoot, we always compare our poses with those in the manga.

Staying loyal to the original manga

We had a chance to visit the filming location of the bridge scene. The scene surprisingly required more labor than we imagined. The original scene is as follows. 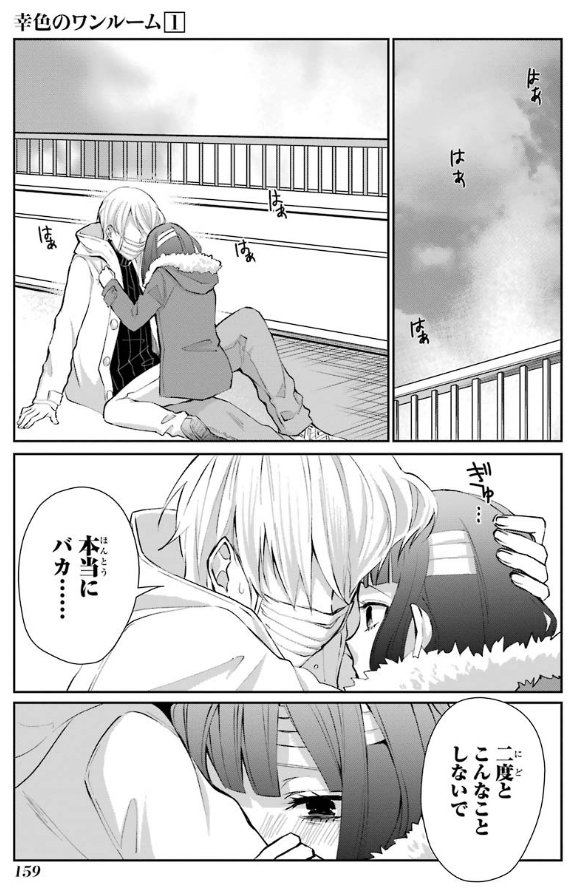 ▲ From the first volume of "Sachi-iro no One Room", page 159. This is one of the story's important scenes.（©Hakuri/SQUARE ENIX）
In order to recreate the scene in the manga, the cast and crew spent hours constantly adjusting the actors' position. Afterward, the manga was used as a reference to confirm the position of the actors, who had changed to their characters' outfits. 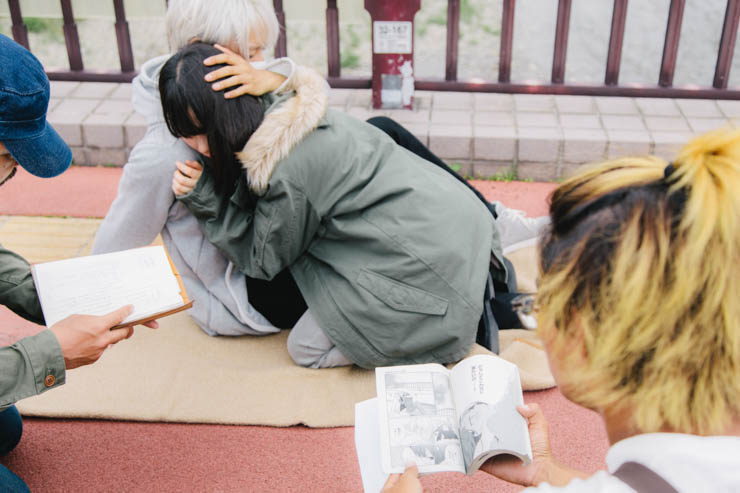 And then, the photo shoot began. 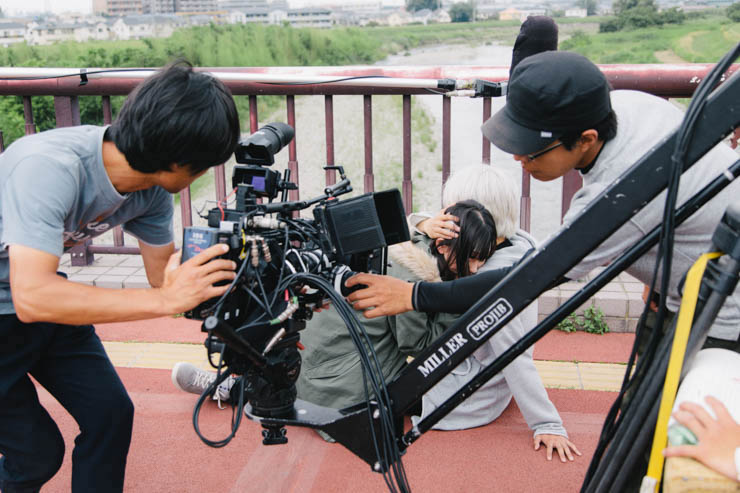 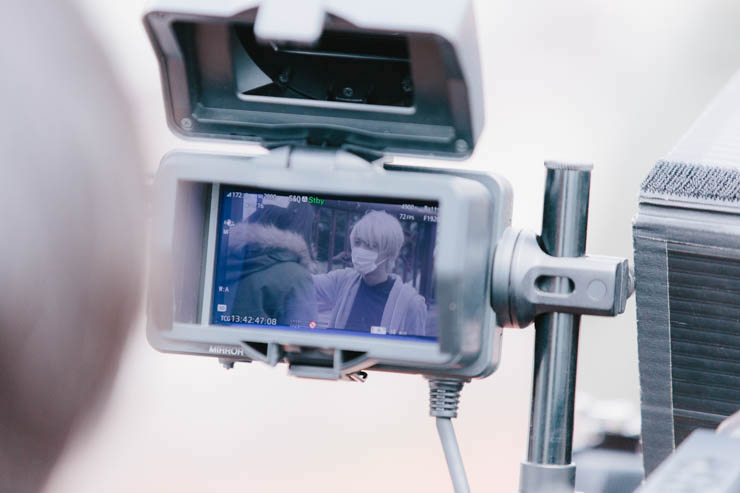 Minute adjustments were continuously being made after that. The data collecting party from pixivision was astounded by the level of their attention to details. We were able to feel the perseverance and enthusiasm that the actors and crew displayed during the photo shoot.

── Hakuri, we heard that you've been to their photo shoot sessions several times. 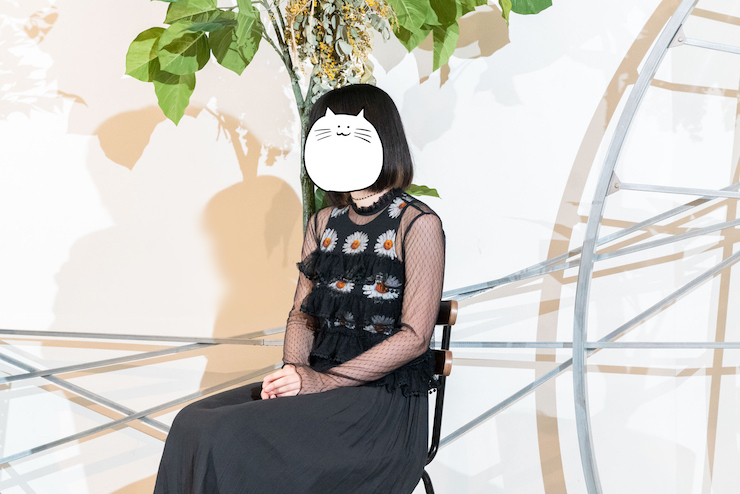 Hakuri：Honestly, at first I was anxious, wondering how it would turn out since the adaptation was going to be live-action and not anime. But the filming set and the looks of the cast are all accurate recreations of the world in the manga, so it will definitely make me happy if the fans of the manga receive this drama series well. 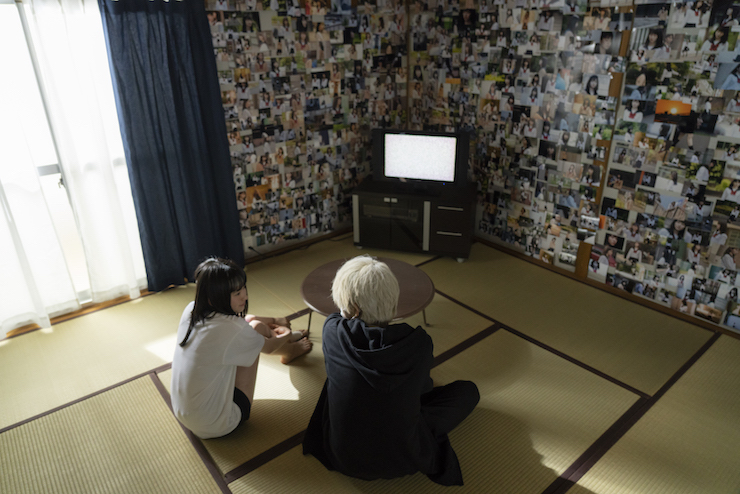 ▲ The core of the story that is "the one-room apartment" was constructed to look exactly like the one in the manga.
── We heard that the drama series will take a different turn of events from that in the manga. How did you work on the script?

Hakuri：The crew did listen to my input. When the manga's live adaptation was decided, they gave me a chance to exchange ideas regarding how the drama would pan out. They asked me what direction I wanted, right from the core of the story all the way to the ending. Since the manga series is still ongoing, I hope the audience will be able to enjoy the drama series' storyline and ending.

Yamada：The ending of the drama series is pretty shocking!

Uesugi：Please look forward to it. 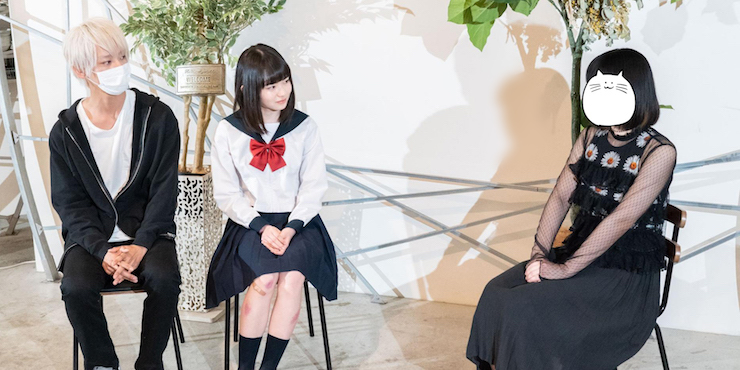 ── I would like to use this opportunity to talk a little bit about the original manga. What prompted you to create this series?

Hakuri：I was just finished with my previous manga series and was unable to decide what kind of story to write next. During that time, I uploaded a few mangas, all of which are dark-themed because I love dark stories, on Twitter. Among those mangas, most people reacted to the one that would later become "Sachi-iro no One Room".

▲ The origin of "Sachi-iro no One Room" is a manga titled "There are different kinds of people in the world" (世の中いろんな人がいると言う話). Originally uploaded on Twitter, Hakuri reuploaded the manga on her pixiv account. The scenes and characters of the current manga were already established then.

── The story's theme is a very delicate and difficult one. Is there anything that you're careful about when drawing this story?

Hakuri：I try to make the readers know that this story is what it is because and only because it involves this particular pair. This story is about a kind and handsome man, whose identity is unknown, who gives a shelter to a beautiful young girl with an unfortunate life. This manga is only possible because these two people are products of fantasy and therefore aren't real. The main theme of this story is the psychological depiction of the two main leads, so I try to carefully and minutely depict their monologues and emotions.

── Now that you mention it, I find it impressive how the story progresses with the two's complicated exchange of superficial and honest words. 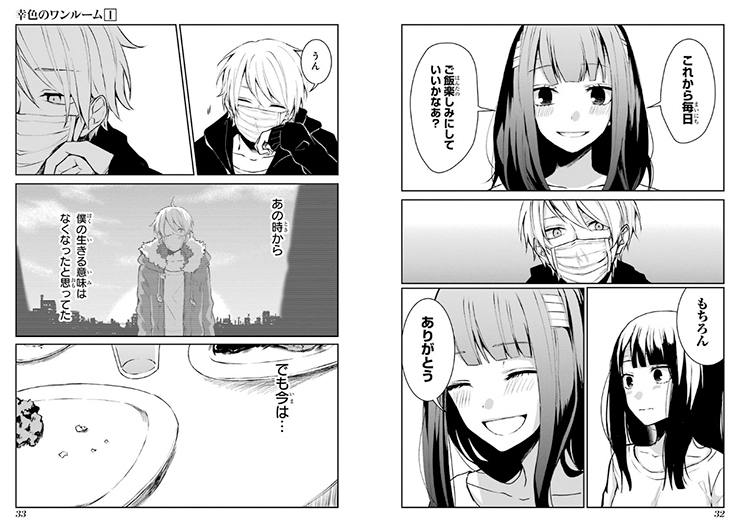 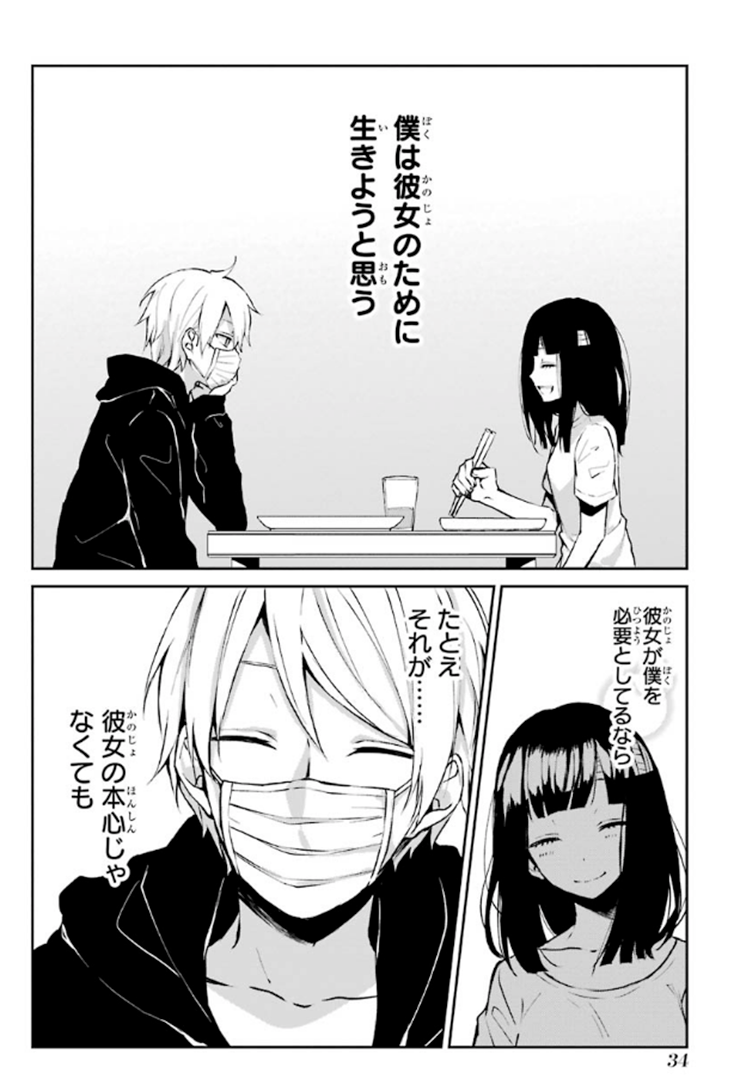 ▲ A scene in the first volume, pages 32 to 34, of "Sachi-iro no One Room". We can see the subtle changes in the characters' eyes and facial expressions. （©Hakuri/SQUARE ENIX）

── What do you think about the manga?

Yamada：I'm a bit embarrassed because Hakuri is here herself, but... I really like the art and I think the characters are fascinating. Both Sachi and Onii-san have complicated backgrounds, so how will the relationship turn out? I think the development of their relationship is very interesting.

Uesugi：I really like how the two characters' change of emotions, facial expressions, and monologues are thoroughly depicted. And that's precisely why I think it's a challenge for me to try to depict those elements through acting. 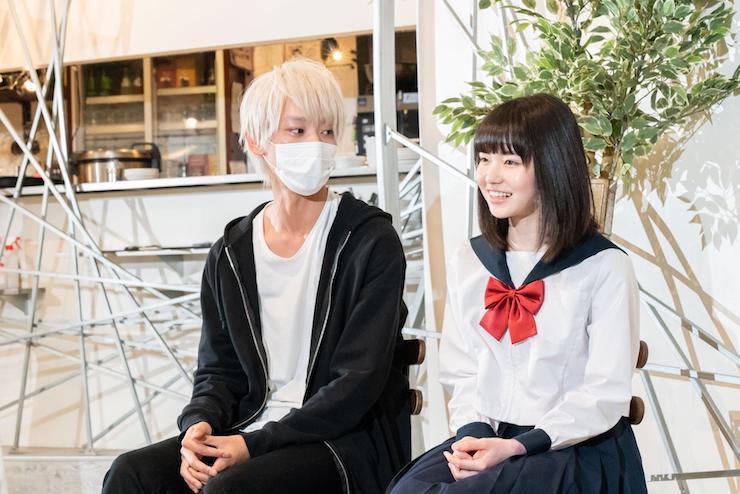 ── Is there any scene that you find memorable?

Yamada：It's the scene where Sachi doesn't even budge when Onii-san points an edged tool at her. I think that scene speaks a lot about Sachi's abnormality and the horrendous things she's gone through in the past. In my opinion, it's a very important scene, so I tried to act it out with caution even during the photo shoot. 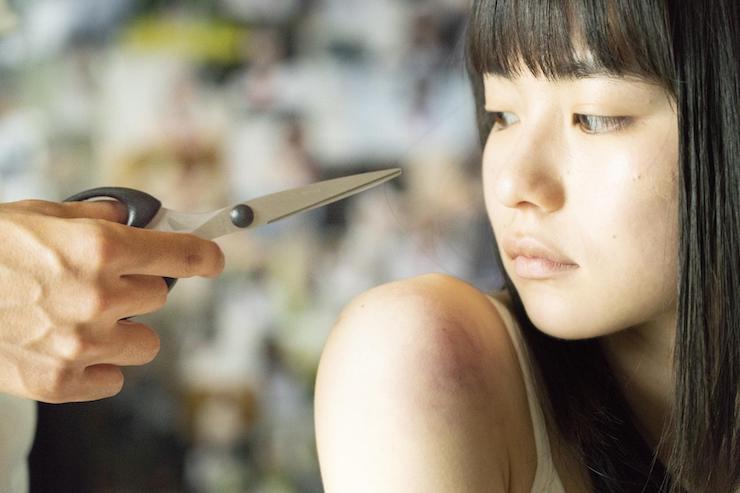 Uesugi：I only noticed this after acting as Onii-san, but the air about him actually changes ever so slightly when he takes his eyes off Sachi or when he's alone. And I find that extremely captivating. As I portray Onii-san, I also try to convey that subtle change in his character.

── Hakuri, do you have anything that you want to ask of them?

Hakuri：I've been listening to them talking about Sachi and Onii-san and I think their comprehension of them is already spot on. So please, feel free to act as you will! 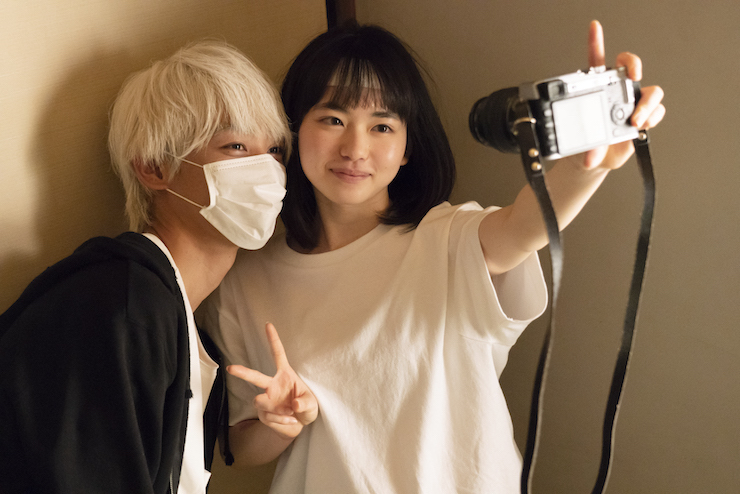 ── And now, do the two of you have anything you want to say to Hakuri?

Uesugi：It's a mundane question, but what does Onii-san do when he eats? I mean, he always has a mask on.

Yamada：I'm curious about that too!

Hakuri：He eats like any normal person when Sachi isn't around and he does take off his mask.

Hakuri：I don't think there's a way for him to live without ever taking off his mask...... (laughs). I make Onii-san wear a mask because I assume he can't afford to be careless by showing his face, considering the fact that he's in hiding, and because I wanted to portray him as a solitary outcast.

── Will Onii-san ever take off his mask for the readers?

Hakuri：That's... still a secret (laughs). Will he? In the drama series?

Uesugi：That's a secret (laughs). To me, the mask is a symbol that Onii-san is still hiding his heart. So if he ever takes off his mask... Then that will probably be a sign that he's decided to open his heart. 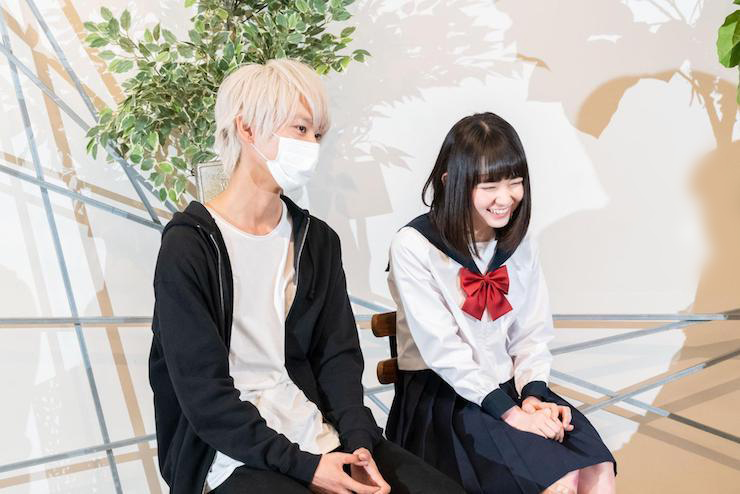 ── Since we're on the topic, how will the story in the manga turn out?

Hakuri：I have plotted the story right to the very end. Up until now, the relationship between Onii-san and Sachi is ambiguous at best, but that's about to be transformed into something more definite. Readers should be able to tell what kind of relationship the two have in the end, so please look forward to it.

── Finally, please share with us the highlights of the drama series.

Uesugi：The ending is quite unexpected.

Yamada：I remember when I first read the script, I blurted out, "Is this for real!?"

Uesugi：The drama series will end in an unforgettable and impressive way, so I hope people will enjoy the story that leads to that ending. Also, the climax of every episode is as suspenseful as if each one is the last episode. Even the plot of episode 1 is something that cannot be missed.

Yamada：The drama series contains a succession of impactful scenes, so I'm sure that people will have a great time watching it. And please do keep your eyes on how the relationship between Sachi and Onii-san transforms.

Hakuri：There will be original characters in the drama series. The cast and filming locations have also been chosen to accurately portray the manga, so please enjoy them along with the differences between the drama series and the manga.

In time with the airing of the drama series, Hakuri will conduct a live drawing session! Please check the date and time of the live streaming on Gangan pixiv Official Website.

"Sachi-iro no One-Room" volume 1, signed by the author and the drama's main leads 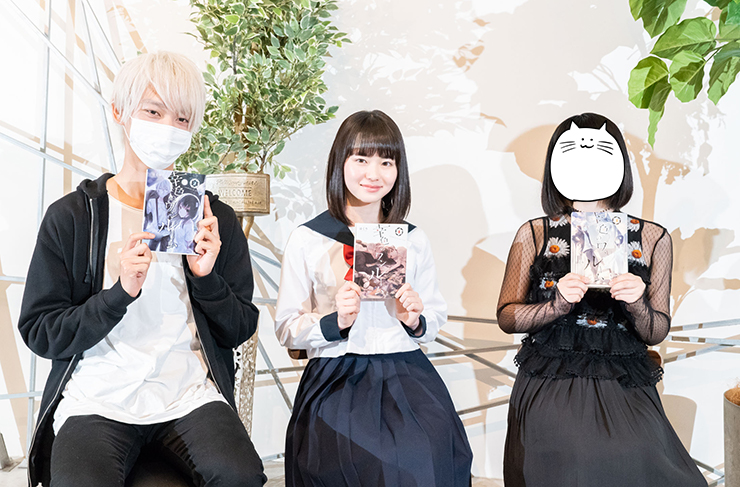 Three people will each be presented with a copy of "Sachi-iro no One Room" volume 1, which has been signed by Hakuri, Anna Yamada, and Shuhei Uesugi. In order to get this present, simply follow pixivision's official Twitter and retweet this tweet! We are looking forward to your participation.
※ The winner of the lottery will be contacted via direct message on Twitter.

Information on the drama series' broadcast and publication

※ The schedule may be subject to change. The drama series is planned to be aired in other areas as well.