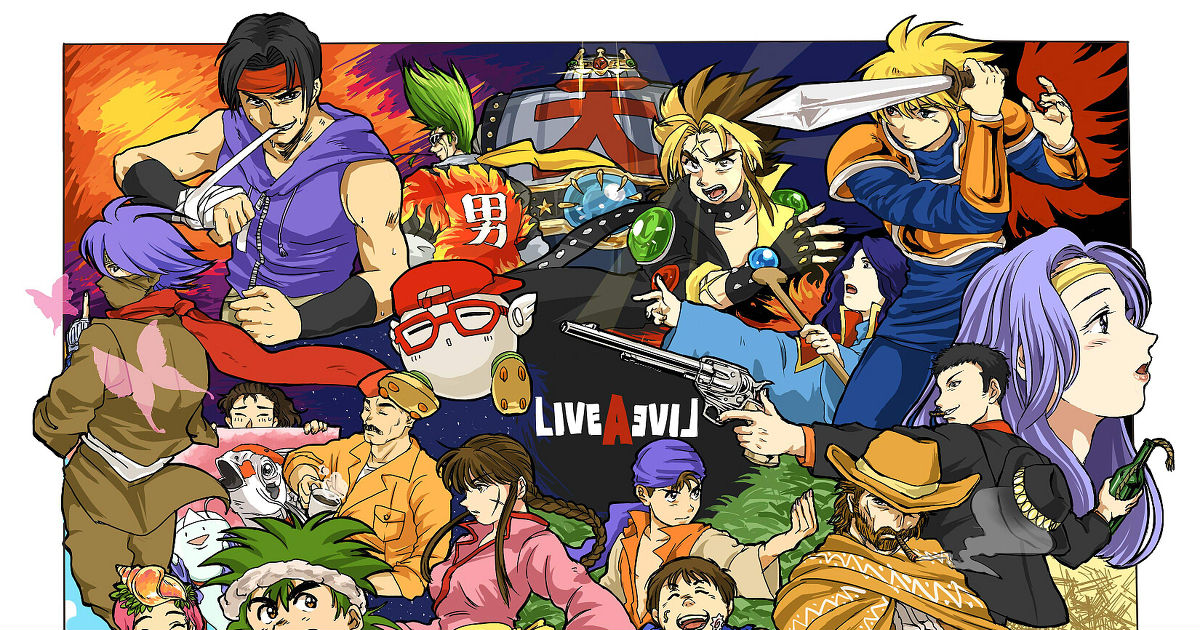 Back in the 1990s, no one could talk about video games without mentioning the Super Nintendo Entertainment System and the same could be said about RPGs and Square Co., Ltd. (now Square Enix Co., Ltd.), which created many smash-hit RPG titles during the era. The RPG titles that Square released back then continued to push the boundary of RPG, of what an RPG could achieve, and many of the systems that we take for granted today were first established in the 1990s. Active Time Battle, a flexible scenario, multiple endings, a New Game with a higher level of difficulty... Are you familiar with these systems and more?

Today, we're featuring illustrations of the RPGs that Square released in the 1990s, including some Final Fantasy titles. Enjoy!

The first Final Fantasy game released for the Super Nintendo Entertainment System. With improved sounds and graphics as well as the introduction of Active Battle System, thanks to which the battles in the game became more fun and engaging, this title was a critical foundation for the succeeding titles in the series.

An RPG that grants us an extremely high degree of freedom when it comes to the scenarios. Each of the 8 protagonists has their own story and with tons of ways and options to choose from in order to clear each story, this is a game that entrusts itself in the hands of the player. As the result, different players may encounter different unique stories.

The fifth work in the Final Fantasy series. A classic RPG and a mega-hit that recorded sales of approximately 2.45 million copies. Through the introduction of Job & Ability System, players can freely customize their characters and battle strategies. Even today, the game still inspires people to complete it via a speedrun or blind playthrough.

A real-time simulation RPG in which you are tasked to move a unit, perform sieges, and expand your territory. However, do note that the story is anything but serious! If anything, it is a playful game with a comedy touch to it. For instance, it is possible to summon a beast named Egg Monster (which is an outright parody of another title) and let it go rampage during battles. This is a game that will entertain your inner child.

The second installment in the Mana series, a series that contributed greatly to the birth of the Action RPG genre. By using the Multitap, it is possible for up to 3 people to play the game at the same time. This game taught us the joy of playing video games together with our siblings or friends!

Like its predecessor, the scenario of this title is also flexible. Through the inheritance system of the emperor (the protagonist), players can write different histories although they're all set in the same kingdom. With the Spark System available in battle, this is a game that allows the player to enjoy different scenarios as they branch out time and time again.

THE SCENE OF VECTA2 再版＋通販のお知らせ

The sixth installment in the Final Fantasy series recorded sales of approximately 2.55 million copies. Unlike its predecessors, this game depicts a world of advanced technical civilization which is represented through beautiful graphics. The game is also equipped with a heavy plot, constructed by the actions and thoughts of its many characters. Having these attributes, the game blew the minds of many video game players at the time.

An omnibus RPG that enables players to enjoy 7 stories, set in different worlds and eras, such as the primitive era, the Bakumatsu era or the near future. The game was a talk among gamers back then as famous mangaka, including Gosho Aoyama, Yoshinori Kobayashi, and Kazuhiko Shimamoto joined the project as designers of each era's main characters. Clearing all 7 stories allows players to play the Middle Ages era and the final era. Many of you might still remember the shock that you felt after clearing those two eras.

A dream project that garnered a lot of attention since these names were involved in the development: Final Fantasy's Hironobu Sakaguchi, Dragon Quest's Yuji Horii, and Dragon Ball's Akira Toriyama. The game recorded sales of 2.3 million copies. The heart-moving story of traveling through time in order to save the world has inspired many gamers.

The third installment in the Mana series. Players get to choose 2 comrades, in addition to the protagonist, out of 6 characters. The story and the last boss differ depending on who the protagonist is and this was a rare system back in the day. While the game is filled with many interesting characters, one of the protagonists Riesz was popular then and still is now. You can still find new illustrations of Riesz on pixiv even today!

This third installment of Romancing SaGa continues to use the flexible scenario system. With improved sounds and graphics, an evolved battle system, more room for party customization, and new mini-games, this game is the ultimate SaGa hit that has undergone various orthodox improvements. The highly anticipated HD remaster version is set to be released in 2019.

Taking place in a sky world Orelus, this is a fascinating tactical RPG where players nurture dragons and fight alongside them. Between its plot about a rebellion against an empire and the change in the relationship between the protagonist and the heroine, this feels-inducing game will forever stay in the hearts of many gamers.

The first RPG installment in the Mario series. The game is indeed manufactured by Nintendo, but the development was conducted by both Nintendo and Square. The game retains the features that are unique to the Mario series while being the first installment in the series with a full-fledged plot. It is a piece that has received high acclaim worldwide.

Treasure of the Rudras (Released in 1996)

A title that features many innovative and original elements, including a plot which progresses daily over the span of 16 days until the destruction of humanity, multiple scenarios where players get to parallelly play 3 protagonists, and the magic words (kotodama) system which allows players to create their own magic spells. The game's fascinating pixel animation is also the best among SNES games.