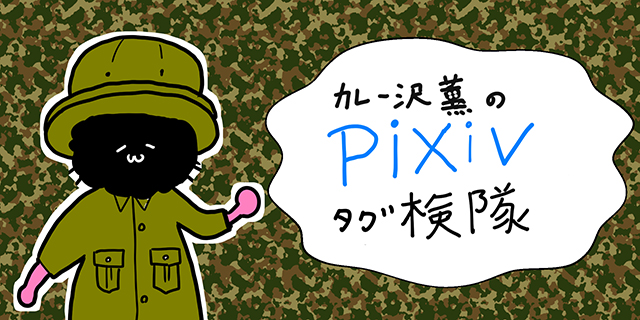 The tag for this time's "pixiv Tag Search Party" will be "unusual head".

My editor says it's a popular tag, but I never heard of it, to be honest.

You see, every day I spend about 68 hours on Twitter and 32 hours on pixiv: 4 looking at the tag hits for my favorite couple, and the remaining 28 looking at the R18 version of them. I guess you could say I only look at the normal stuff.

But then, everybody has their own taste and who am I to judge? As long as there's no crime or trouble involved, there's no wrong or right to such things.

Maybe a "normal" taste, or hobby, is one that many comprehend and share. One would even call it popular, or a "beginner level" kind of hobby.

So I guess my editor didn't lie about this tag being a trending one, after all.

You might not understand it at first, so I'll help you by saying that the most common example is the "NO MORE Eiga Dorobo" character.

"Eiga dorobo" (literally "movie thief") is the commercial you see before every movie at the cinema, encouraging people to stop piracy.

The character in that very commercial is a human man in a suit, but with a videocamera where his head should be. I believe he is the center of the world revolving around this tag.

The "eiga dorobo" tag as well has more than 2,500 hits and that's 21 times the hits of my favorite couple tag.

I also noticed that if the head happens to be that of an animal, the character seems to fall into smaller categories, such as the therianthrope, so it's more common to use "objects" as heads, like videocamera.

Maybe it doesn't even need saying, but I'll let you know that there are people who ship these two characters as a BL couple.

The juxtaposition of roles such as "thug" and "honored student", or "yakuza" and "policeman" has always been one of the most popular tropes when it comes to BL couples.

On top of that, these two characters are being played by no less than two pro dancers, so not only their style is appealing, but they also have the moves. Let it sink in that you can witness the chase between these two characters on the large screen of a movie theater.

If seeing their chase doesn't give you any BL vibe, then maybe the subtext is not meant for you to get.

■ Character who became famous thanks to their "unusual heads"

Other characters who rose to fame because of the shape of their head may be Pyramid Head from the Silent Hill saga and P Head.

P Head is the producer in THE IDOLM@STER series.

There are also characters like "Admiral" in Kantai Collection and "Saniwa" in Touken Ranbu (where "saniwa" or master is the word used to refer to the player) that surely exist, but are never depicted.

In fanworks, it's interesting to see how people bring a different interpretation to the table when it comes to drawing these characters.

Some people may even give them lines to say but just draw nothing of them, some may decide against giving them traits that are too unique and keep their face blank, while some may go for what you'd call a "secondary character design": the kind that you've already seen here and there.

Some others stretch so much in giving these characters definition, that you might call their products original works.

P Head was probably designed in order for him to have no individuality at all, with the "P" of "Producer" on top of a male body.

I think it's much like the shiro hage character (白ハゲ; white and bald stick figure) that is drawn with as little traits as possible but ends up being a hit. That happens sometimes.

■ Why are there so many men (male bodies) with "unusual heads"

There are many original works with "unusual heads"

The variety of heads is amazing, from traffic lights to road signs, to fruit, to... Well, there's plenty. What's even more interesting is the fact that there are many couples consisting of a character with an unusual head and a human.

Of course, facial expressions won't work to show these characters' emotions. As such, the artist's ability to convey their emotions plays a big role. So works that feature not only characters with unusual heads but also ingenious ways of expressing their emotions seem to be popular. For instance, you will see that when a character with a traffic lights head is embarrassed, their red light lights up.

When the artist is really great, the character may even have a toilet seat for a head and you will think they're hot. It does make you question your taste from time to time, yes.

Anyhow, my point here is this: "unusual head" characters are mostly men (or better, male-bodied characters).

Ultimately, I think this is a good chance to think about the differences between the sexes. Does this tag appeal more easily to women? Does this tag mean women can only find men adorable if they have non-human heads or are expressionless? I think perhaps the answer lies in whether or not we've had a chance to realize that "unusual head" female characters are just as good.

As I said before, the most famous character in this trope is probably "eiga dorobo", getting screen time all across Japan before every movie. Do you know how many female characters are featured in that commercial? None.

I tried to think of a famous female character too, but nothing popped up.

I feel like we are being deprived of a great chance, which is to enjoy "unusual head" female characters.

How nice it would be to see a female character in the "eiga dorobo" commercial? I'd like to see that and the changes it would bring to this tag. 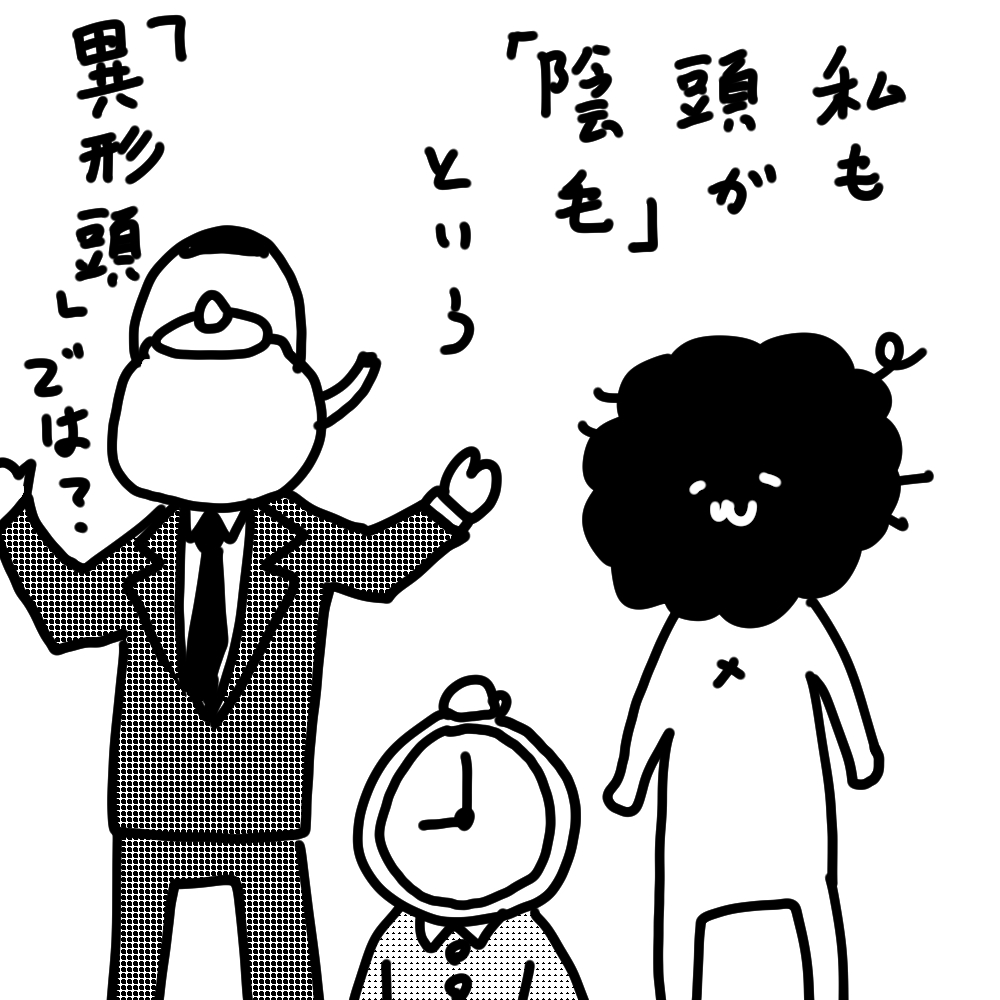