How should I handle comments...?

Up until now, I've been working primarily in a very niche genre, but recently I've branched out into creating fan art of a popular genre. Drawing the pictures themselves is a lot of fun, but although I've started getting a lot of likes and retweets, I've also started getting a lot of undesirable comments as well. It's not so much that these commenters particularly hate me, the problem probably lies with me being excessively bothered by them speaking with inappropriate casualness to me, even though we've never interacted before, and saying things that come across as highly critical. I know by this point that I'll get really depressed about those types of comments, so I've started taking the approach of "although there may be some positive reactions too, I’ll ignore all comments.” Truthfully, I just want to see the positive comments, but...

How should I deal with comments online?

Comments are like oxygen to an artist. We're just barely managing to survive by photosynthesizing the joy of creation, but sometimes it becomes necessary to take in the “oxygen” of others’ comments just to keep breathing.

Basically, it's not excessive to say that the secret to long life as an artist is to either "periodically take in people's comments" or "consume the hearts of genius artists with a side of wasabi soy sauce for dipping." But it's also true that people's comments are also capable of suffocating an artist.

In fact, there's no shortage of artists who put down their pens over critical comments that somehow managed to slip through their carefully crafted fluff-filters. And, just like a middle schooler who's been ordered by their mom to do their homework, they’ll moan angstily, "I don't have the motivation to do anything other than watch YouTube videos!"

In order to continue and enjoy working as an artist, it's absolutely critical to learn to deal with commentary.

But first, you should recognize and appreciate the fact that because you have to think about "how to deal with comments" means that you've attained a level of recognition as an artist.

There are many otaku who say things like "I want to write a comment to my favorite artist to tell them how much I love their work, but I'm afraid they'll be disgusted by me!" and have so little confidence that you wonder if they were raised in a gutter or something. And even for those who aren't of this type, it takes quite a bit of courage to reach out to a complete stranger and tell them, "I like your work."

So, this means that your work has reached the level that inspires people to find the courage to reach out to you.

Also, the fact that you've started having to worry about negative comments is a naturally occurring side effect of your readership increasing.

Even the new Kimetsu no Yaiba movie that's all the rage right now has its detractors, who say derisively, "I don't see what all the hype is about, it's not really all that interesting..." And there are plenty of people who are blowing out the flame of their own lives by asserting, "everyone's watching that movie right now, so I'm not going to!"

The appearance of "criticism" and "resistance" like this is a naturally occurring side effect of the audience's parameters being so wide. On the other hand, you could say that if there's only positive feedback, it's not because the work is especially good but just that the audience is too small to provide a wide array of opinions. This isn't a good thing either, especially for professional artists trying to make a living from their work.

In summary, regardless of the fact that you've transitioned to a popular genre, your work is valuable enough for shy fans to find the courage to comment on it and is being read by such a large audience that even critical comments have started to appear. So you should really give yourself some credit for how much progress you've made as an artist.

It's impossible to simply "ignore the negative comments"

Now, regarding the problem that this has presented of "how to deal with people's comments," many people would tell you, "the majority of commenters have nothing but nice things to say, so just ignore the haters!" And they're not wrong, but let's proceed under the assumption that this is impossible.

Let’s say you ordered a juicy, delicious steak at a restaurant and it was topped with what looked like yuzu kosho, making you think with anticipation, "Oh, look it's got Japanese-style steak sauce!" But then you bit into it and found that it wasn't yuzu kosho at all, but in fact a giant disgusting booger, would you really be able to say, "Well, at least the steak part is delicious!"?

No matter how much of a good thing is on that plate, if there's even a tiny bit of booger on it, it'll obviously put you off to the entire dish.

As such, rather than putting up a front and forcing yourself to pretend to be okay with it, it's better to own up to the truth and admit to yourself that "negative comments bother me."

The problem is that it's a natural human tendency to pay more attention and give more weight to the troubling negative comments than to the uplifting positive ones.

Like in the case where you're praised all day at work for a job well done, but then on the way home, you step in dog poop and are in a bad mood because of it the rest of the night. We as humans tend to waste our valuable time and energy thinking more about negative things than positive ones.

There may be times when this is necessary, but when it comes to hobbies, she who is able to enjoy them for even a second longer is a winner.

In short, you getting depressed over negative comments and wasting your time sending in a request for advice to me is like getting knocked out cold in the very first round of a fight.

When you get those undesirable comments, you probably read them over and over again, and fantasize about what you'd really like to say in reply, like "you've got some nerve, using such casual speech with someone you've never even met!" and "I didn't ask you for your opinion, if you have nothing nice to say, don't say anything at all!" right?

If you're not going to reply at all in the end, time spent thinking about how you would reply is time wasted. Stewing on it just makes you feel worse in the end, doesn’t it?

Rather than doing that, it's much more effective to reread the positive comments a hundred million times.

What I'm trying to say is, when you see a booger on your steak, either immediately cut off the piece with the booger and set it aside where you don't have to even look at it again, or if it's already in your mouth, just swallow it down without chewing to get rid of it as fast as possible, and then focus on enjoying the rest of the juicy delicious booger-free steak.

To this end, I suggest you get well acquainted with the mute and block functions, and do your best to customize your account settings so that you only end up seeing as many of the positive comments as possible.

As for replying to comments, you can write a disclosure in your profile that says something like "due to time constraints, please understand that I'm not able to reply to all comments", and then only reply to comments that you were genuinely happy to receive.

Hobbies are all about enjoying ourselves, so it's important to remove anything that impedes this. If you fail to do so, you'll quickly fall victim to "burn out," which is the primary cause of people setting aside the hobbies they once enjoyed.

If you do this, some people might claim that your work won't be popular because you don't take criticism seriously enough, and while I can't refute this, what's most important for both amateur and professional artists alike is motivation. Anything that damages this precious motivation, no matter how potentially valuable an opinion it may be, is a poison best avoided. And it’s even more important to avoid if you're doing this as a hobby, not your job.

The best way to deal with people's comments is to "stop spending your time tasting boogers for longer than necessary." 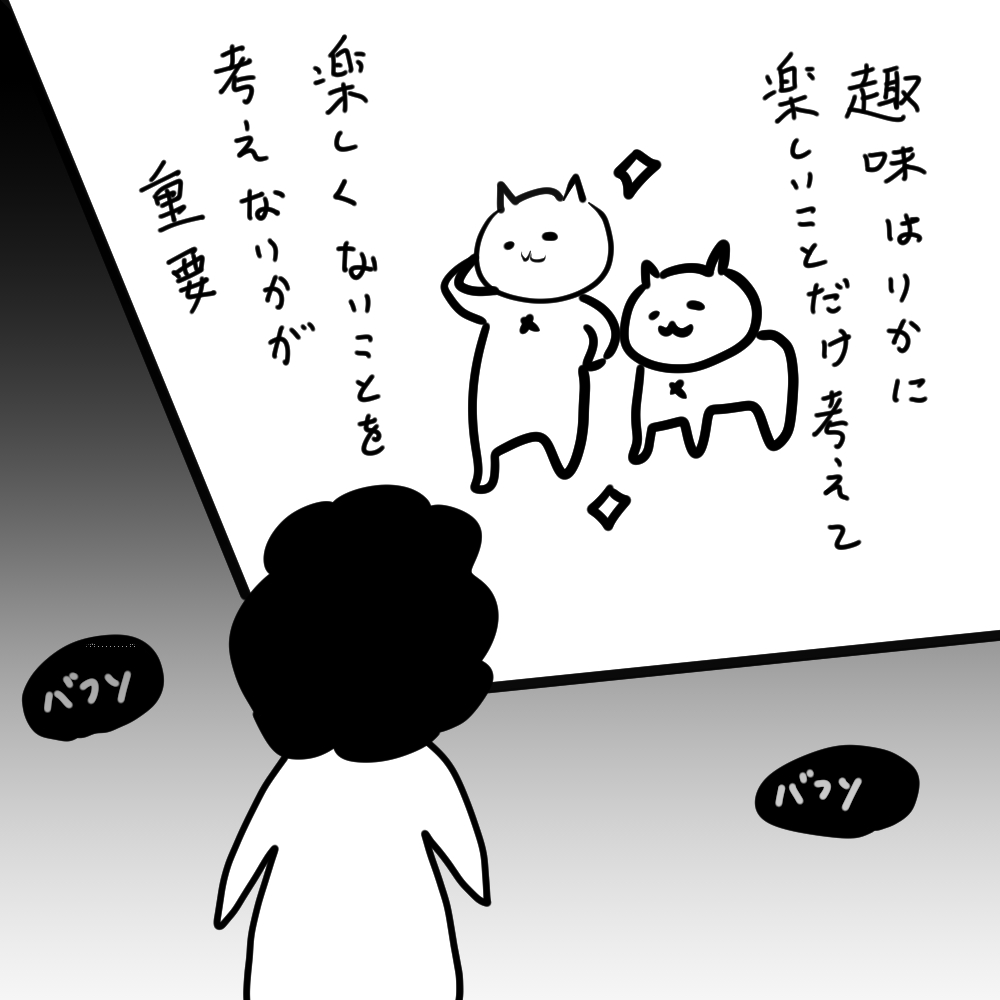