I find myself feeling jealous of just a single person

I currently draw fan art of characters from a certain video game and upload them on Twitter and pixiv, as well as creating self-published dōjinshi comics.

However, there’s a person who also draws fan art from the same game as I do. I’ll call them A-san. I’m writing to you about my feelings of jealousy towards this person.

A-san is very talented at drawing and has loads of followers. They are much more popular than me on both Twitter and pixiv.

Their drawing and coloring style, the fact that they upload single images at a time, and even the characters they like to draw are all very similar to mine. I can't help but compare our work and think "I bet everyone prefers A-san's work over mine...". I end up getting depressed.

Recently it's gotten to the point that it's painful to even look at A-san's work, so I've muted them. I know I shouldn't compare our work, but my traitorous heart can't seem to help itself.

What worries me is that this confused and hateful feeling that I assume must be jealousy only rears its head in response to A-san. I don't feel this way about any other artists.

I need to find a way to come to terms with these feelings, because as long as A-san keeps drawing, I’ll keep feeling terrible. My ability to continue to enjoy drawing depends on it!

I'm also an extremely jealous person, and the success of my competitors really bothers me. So I don't read any popular manga and all of the manga authors that I follow on Twitter are muted once they get too successful.

However, when I really think about it, the series that are popular in the same genre as mine are divided into two categories. Those that don't bother me very much and those that really, really irritate me.

If I come right out and say the titles of the series that really irritate me here, it will be difficult for me to continue in this industry so I'll restrain myself, but I can say that series like Demon Slayer don't bother me at all.

In fact, I could probably even see myself reading it.

I'm pretty sure the reason why is because Demon Slayer's sales are in a completely different arena than mine.

Even when it comes to fan artists, the only people who can be honest with themselves and recognize someone as a “genius artists” are those who either aren’t artists themselves, or who are artists but work in a slightly different genre or with different characters... else in the case where the artist is just so much more talented than them that they can't even imagine it being a competition.

After all, you probably don't often meet people who go around cursing Satomi Ishihara for being irritating just because she's prettier than them, right?

You're much more likely to find people talking trash about a girl in their class or their workplace who "Isn't even all that pretty, but for some reason, the guys are all over her."

In summary, it's common to get jealous of people who have a lot in common with you and who aren't "leagues above you", but "just a little above you."

The reason you're jealous of A-san is because you're both artists who work in the same genre and with the same characters, and have a lot in common. I think that although you recognize that A-san is "good at drawing", a part of you also thinks "A-san's ability isn't all that different from mine" and "If I tried hard enough, I could draw like that too."

You might also say that it's common to get jealous of "people who are in a position that you could also potentially inhabit."

Basically, when you see how many likes A-san's drawings get and how many followers she has, you can't help but think that if you were only blessed with a chance for more exposure on your work, you might have that many likes and followers too. And then you end up feeling ashamed and disappointed, right?

However, being jealous and thinking "I could draw like that if I tried hard enough" aren't necessarily bad things.

On the other hand, although labeling another artist a "genius" does involve honestly appreciating that person's good points, it also means admitting total defeat to them as a fellow artist and losing all will to try your best to compete against them.

The problem is whether or not your jealousy is working for you as a "helpful power."

Are you a Tezuka type? Or a Pubic Hair type?

The famous manga artist and anime director Osamu Tezuka also said that whenever a talented newcomer would appear on the scene, he would tell himself "I can draw just as well as them."

As such, I believe that the way for you to cope with your feelings of jealousy towards A-san is to look at their work, and after letting yourself feel jealous, transform that jealousy into action.

If you look at A-san's work, think "I can draw just as well as them!", and then feel motivated to immediately open Clip Studio Paint to begin working furiously, I think it's safe to conclude that your jealousy is actually a positive thing. You're experiencing unpleasant feelings because you are determined not to lose to A-san.

However, if you look at A-san's work and think "This is good"... but then find yourself promptly searching for defects in it, it's probably best if you avoid A-san and their work completely.

This is because, in this case, you're not using the power of your jealousy to improve yourself, but to search for your competitor's defects and "win" against them by dragging them down below you.

This won't help you progress even a single centimeter as an artist, and going out of your way to search for defects in a lovely piece of art is like searching out dirt and stray pubic hairs that somehow got mixed into a delicious meal. It just isn't good for your mental health.

The reason I don't read most popular manga is because I am well aware of the fact that I'm the pubic hair searching type. Reading those manga will bring me neither improvement as an artist nor enjoyment as a reader.

So I suggest you first determine whether you’re a Tezuka type or a Public Hair type. If it turns out you're a Tezuka type, it might be a good idea to occasionally view A-san's work to provide yourself competitive inspiration.

On the other hand, if you are a Pubic Hair type, you should avoid A-san and their work completely. Do your best to forget they even exist at all.

By the way, "jealousy" is one of the most powerful of human emotions. It's said that even a Buddhist monk dedicated to his studies will feel the tug of jealousy if he sees a "GUCCI" tag peeking out from under another monk's robes.

There's no way that normal fans like us can rid ourselves of something that even genius artists and Buddhist monks can't manage, so it's probably impossible to avoid feeling jealous altogether.

As an ordinary person, I think it's a more productive use of your time to try to think of ways to avoid situations that make you feel jealous. 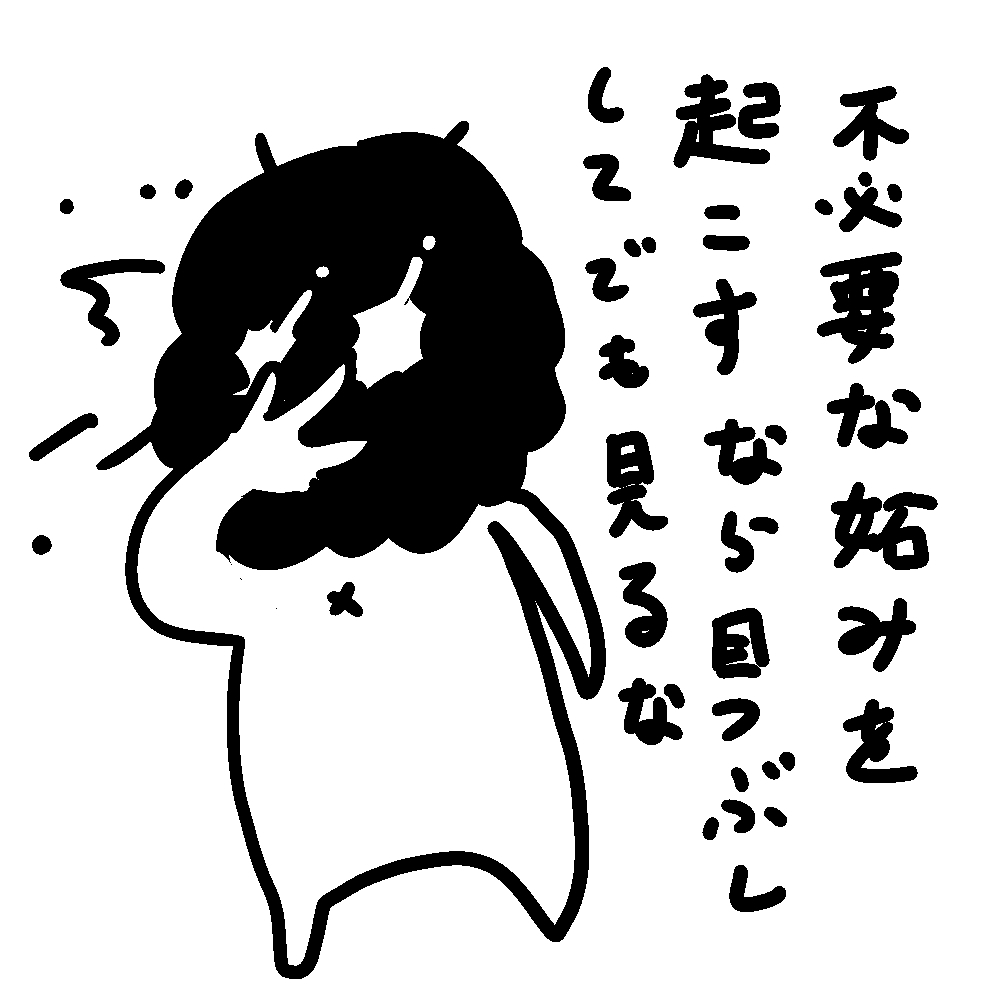