I want to get better at drawing but my practice isn’t going too well. Should I just quit?

Hello! I always have a great time reading your articles!

Getting straight to the topic,

I have ideas on what I want to draw, but I'm often unable to shape it the way I imagined due to my own lack of skill. I still want to get better and practice more, so at one point I found myself starting to research, look up tutorials, and buy guide books. Unfortunately, my days are basically over after I handle all my routines, housework, and errands, so I basically don't have any time to practice. I can’t find any motivation at the end of the day and this situation is affecting my health as well. I also tried practicing in my spare time, between other things, but that didn’t last either...

It’s been like this for a few years now, and if I can't manage to change something, I might as well just quit…

It would be a shame to let my ideas go to waste by quitting, but under my current circumstances that might be the better choice?

My apologies if you have already had a similar inquiry. Please be sure to look after your health, and best regards.

“I don’t have what it takes to draw yanderes in love!"

A quote by the famous painter Vincent van Gogh, when announcing his retirement.

That's a total lie. All jokes aside, many artists and creators have the same dilemma as you. It really is difficult to translate the image of your mind into a perfect illustration.

I myself am a manga artist, with over 10 years of experience, and I can tell you that this is not the case. I’ve been drawing every single day in my decade of experience, but to be honest, I haven’t felt any real improvement as time went on. If anything, I’ve been picking up bad drawing habits which I can’t get rid of now. So I could never say, “practice makes perfect”. It's just not that simple.

It is true if you keep practicing you will improve, at least to a certain extent. But you can't expect a direct correlation with effort and progress. There are people born with natural talent, geniuses who are quick to pick up new things and be good at them, ordinary folks, and last but not least - you have those who practice like crazy, day and night, but somehow end up getting worse. A special talent in itself, actually.

So basically, just because you practice as much as everyone else, there is no guarantee that you will be able to draw the perfect picture because most likely, there will always be people ahead of you pushing those ideals.

A person without any special talent must put in the correct kind of effort.

Baseball player Yu Darvish once said, “They say hard work always pays off, but the wrong kind of hard work will betray you." Mother Teresa along with other notable figures also said, “Practice doesn’t make perfect if you’re doing it wrong.” You can practice your batting skills all you want, but if you have the incorrect technique, you won’t achieve anything, let alone find improvement.

Drawing is the same! You're not going to get any better if you only practice the things you're good at like being fixated on only drawing the eyes of your favorite character. Every now and then you might get your ‘4’33’” kind of sub-cultured essentialist vibing in your work, but that's about it.

If an ordinary person genuinely wants to get better, it comes down to the fundamentals. All the more reason you should be buying those textbooks and practice using those random vertical and horizontal lines when you sketch a person (the ones that never made sense back in school).

And yes! It’s a hassle and it’s boring!

It may be your favorite character, but it’s still effort

We’re all human. It's only natural to want to skip all the hassle of practicing and jump straight into drawing our favorite character in a lewd costume... or try creating a manga that will get people hyped. I get it.

Of course, you can try! Though, you will most likely just end up getting swamped, not being able to materialize anything, let alone draw that perfect picture. You will soon be announcing retirement.

Still, starting from those random horizontal lines is still a hassle, and it won’t last.

When I used to moonlight as a manga artist, I was also working full time, and I’d always say to myself “As soon as I quit my job, I’ll have the time to get back to the basics.” But the truth is, even now after quitting my job, I still haven’t used a single horizontal line let alone all those other lines for my drawings. I’m basically just a wandering Rurouni Kenshin, only without any of his fateful past encounters.

So, saying that you don’t have time really is just an excuse. You may be busy with your daily tasks as well as trying to keep healthy and all, but I think the answer to this problem is that at the end of the day, it’s because it’s a hassle.

I’m not trying to put you on the spot or point fingers or anything. It just really is a lot of work.

You know when you have to draw those complexly designed belts a character is wearing, and you have to make sure no detail is left out? That isn’t fun and again, it’s a hassle regardless of it’s your favorite character or not.

You can always put the character you're drawing in a situation where their clothes just suddenly disappear because what are clothes anyway? Though, leaving out important details because “it’s a hassle” will once again lead you further away from your perfect picture.

Basically, if you want to keep drawing your favorite characters' eyes, you’re going to have to overcome the mentality of thinking everything else to be a “hassle”. That is what it means to draw.

If anything, the hassle a manga artist goes through is ten times the fold. For instance, drawing your favorite ship from the teen's love card game Kimegoma also means that you might have to draw hundreds of extra characters in the background, maybe the National Diet Building, and probably a ton of tanks!

Sounds like another hassle? Well, without it, you’ll just find your character in the middle of the wilderness making a lonely speech to absolutely no one. A sorry sight to see.

Trying to improve your drawing skills is already one thing, trying to draw that perfect picture means that there will be an infinite amount of effort ahead of you. Obviously, the larger the scale, the more effort.

You might ask yourself, why should I even bother putting in such hard work in the first place? And you're not to blame! Calling it quits may not be a bad idea. Instead of stressing out over practice and trying to draw that perfect picture, why not draw your character in that situation where their clothes suddenly disappear? This may be the best stance to have if you want to avoid unnecessary work.

Giving up isn’t a failure

Drawing can be a stressful hobby. 99% of the time is hard work, but if you're able to overcome all of that, the sense of achievement will be absolutely amazing! Not to mention you can finally draw those eyes!

Furthermore, receiving comments and feedback from people who viewed your work can be even more uplifting. You might even find yourself starting to enjoy drawing those complicated belt designs that your character is wearing.

Though, this is something you can only experience if you continue to draw. Trying to visualize the amazing view that comes after all of the hassles you go through could be the key to your motivation.

If you're still not convinced, then giving up may be the best option.

You drawing your favorite character isn’t the only form of love. Being able to patiently wait until a talented artist draws that character for you is also a form of love - or so many would say.

Even if you decide to give up drawing, that's not failure. Think of it as an expression of your love for your favorite characters! 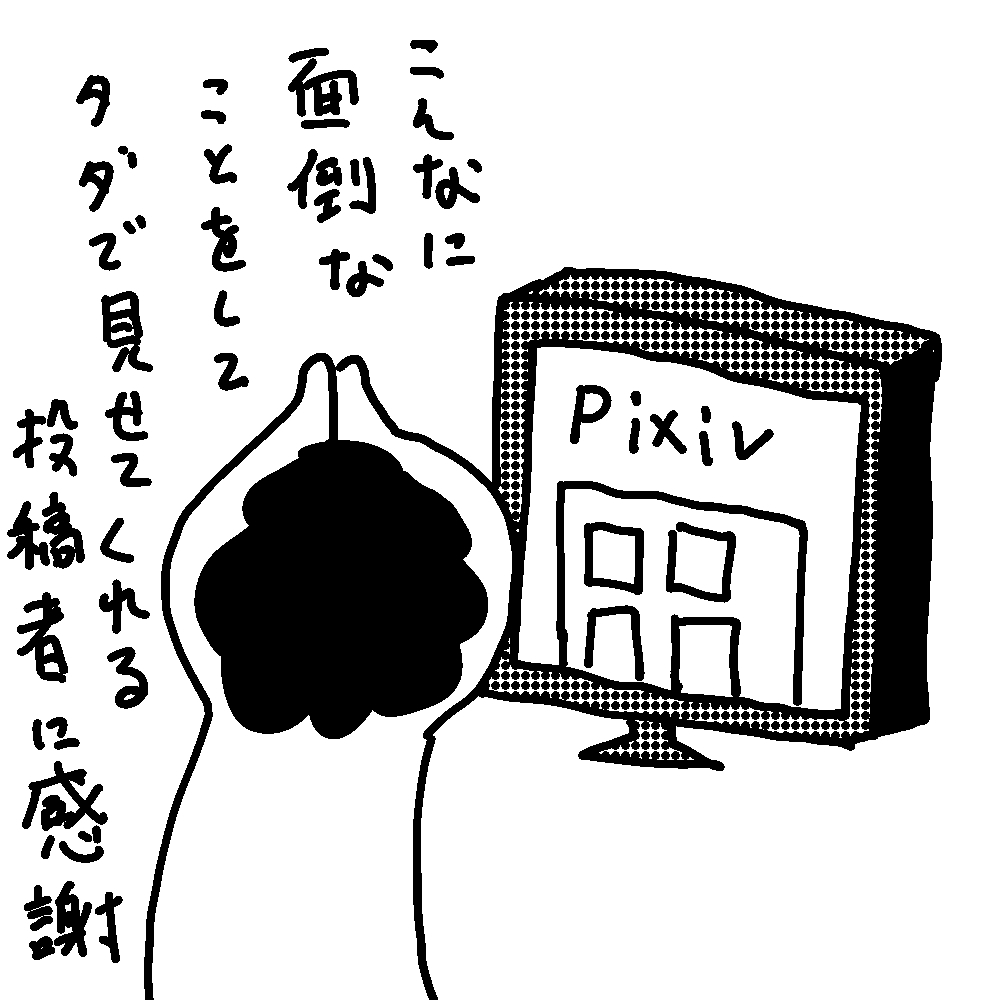 Feel free to send your troubles in languages other than Japanese too.