Luxiem is a VTuber unit under the English branch of the Nijisanji agency. They debuted this past December and have already amassed quite a following.

This five member virtual YouTuber unit falls under the NIJISANJI EN umbrella and are the agency’s first male members, making their worldwide debut on December 20, 2021. The boys, through various circumstances, have been ripped from their respective time periods and thrust into the present.

Their debut song is titled “Hope in the Dark”.

On December 20th, Luxiem made its first unit appearance on NIJISANJI EN’s official YouTube channel, with each member broadcasting their own live streams from their individual channels. The event was hosted by Nijisanji’s Oliver Evans and NIJISANJI EN’s Elira Pendora, which also helped attract fans from the parent agency.

According to some of the latest pixiv viewer data, buzz over the dawn of Luxiem is growing — not just in English-speaking countries, but in various Asian countries as well. 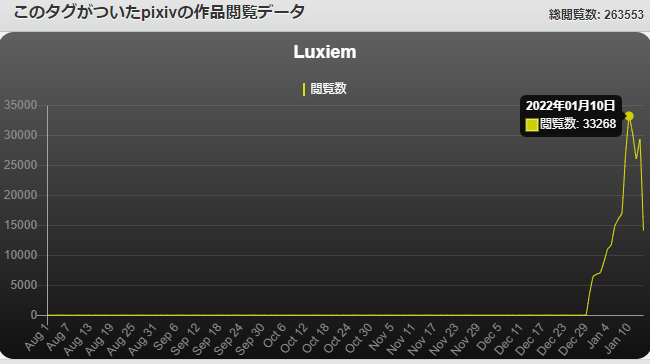 Originally the head of a notorious gang, he fell through time while in mid-pursuit of his future groupmate, Mysta. He was inspired to join the VTuber world after seeing a few streams himself and has an abundance of one on one communication skills. He can even make himself sound like a woman.

The world’s strongest demon who originally ruled a stronghold on the edge of the northern part of Honshu, Japan. After he was deemed a threat by Ieyasu, Vox's castle was destroyed and the demon himself was believed to be dead. He was able to revive himself, however, thanks to the demon blood that flows through his veins.

A mild-mannered sorcerer who has no patience for those who would do him harm. His Japanese is proficient enough that he's able to host his streams in it. He's been a bona fide NIJISANJI fan since 2019.

A genius-level detective with a self-proclaimed eccentric personality. He wound up in our time after falling through a portal as he was being chased by his current groupmate, Luca. Up until now, he’s had quite a few incidents involving food, leaving the people around him to wonder just how he’s managed to live for as long as he has.

A novelist who was inspired to take up the craft after becoming enamored with the literary world in his childhood. However, while he was in the midst of writing, he lost consciousness and when he awoke, somehow found himself in our time. He can also speak Swedish, which might be somehow related to the fact that he streams from Virtual Scandinavia.

Here’s some shots of the boys together!