If I want to increase the number of artists drawing a pairing, what should I do?

In years past, when I was the only person drawing a certain minor pairing, there was a lurker who would always reply to my posted works. When I started to feel as though I had drawn all I wanted to draw, my pace slowed until eventually I washed myself clean of that pairing entirely. But recently, I found out that the lurker themself began creating their own works. No other fan artist came to take my place, so it seems they decided to take it into their own hands.

I was kind of happy that the number of artists increased and I got excited thinking about things like, “I wonder what they have in store for Halloween?” But that got me thinking… Outside of this kind of starvation tactic, what leads people to start making their own fan works? It’s not just thinking things like, “That person is also going to be doing their best to make something for Christmas or Valentine’s Day, so…” right?

What you create with just your own power: Magic

Even if you’re trying to be self-sufficient, there’s going to be some outsourcing. Even the brilliant singers of TOKIO, who also run a restaurant making ramen from scratch, have to outsource things like growing vegetables and raising livestock, and they order things from Amazon to make it possible.

Outside of being able to vomit and produce a perfect bowl of ramen, you can’t really say that you were self-sufficient, right?

But, something like that is impossible without magic. And even if you could use magic, you’d want to use even better spells. Like, if just before you get hit by a truck, a goddess bestows a skill upon you, but then you have no choice but to fight on and on to gain yet another skill.

However, I think that “creating” is something close to magic.

As long as you have a brain, even if you don’t have any tools, you can create something that you want to see from start to finish using your own power. And if you have a pen and paper, or if you have a bit of money and get an iPad, you can make something that you can show others. I think that the things that humans can do are the closest thing we have to magic. Furthermore, now we can show our creations not only to our family and classmates, but to the whole world.

That’s why middle-aged otaku, myself included, deeply feel that it’s a good thing we didn’t have the internet when we were junior high schoolers. This isn’t to say that our evolving society is like a sci-fi world where humans will be destroyed. The time when a self-aware AI will come to kill off humans is still a bit further in the future, but the time when things we posted on the internet in our youth and forgot about can come back to haunt us in adulthood is now. The things we post on pixiv and social media, and the things we do and say online, are done way too casually, so we have to be more careful because there is the possibility that it will affect our future selves.

Fan art drawn by others has nutrients we lack

I got off-topic, but frankly speaking, to create is to be self-sufficient. You don’t need money. You just use your own power to create what it is you want to see, so it’s something like magic and dreams. And, no matter how spectacular the creations you make are, you know that that is something that you have pulled out of yourself.

If you want to eat, you can eat, but if you can, you want to eat something that someone else has put on a plate and served to you. That’s how humans are, right? Likewise, while works created through your own self-sufficiency will save you from the bloated stomach of starvation, they’re also overwhelmingly lacking in “nutrients”.

“Fan art drawn by others has nutrients we lack.”

Just like in the quote, if our works were food, then the ones we create ourselves are completely lacking in vitamins and other important nutrients. It’s like eating nothing but carbs and, the more you eat it, the more the color and shape changes into something horrible.

So, of course, our health requires the creative works of other people, and in order to get them, we have no choice but to get others to draw them for us – outside of methods like kidnapping or blackmail, of course.

Convincing others to jump into the same swamp as you isn’t an easy task, but convincing them to create for you is an even higher hurdle to clear.

I’ve written about this in my advice column before, but to create requires something like manifesting a libido, so when showing someone your favorite works or character, you have to pray that they’ll end up like Kira Yoshikage seeing the Mona Lisa.

However, there’s also the important point from that previous advice column about “drawing fan works to make a certain someone happy.” In short, if you can make someone think, “I want to make this person happy,” then that person will start to create fan works of your favorite character or genre, so from that reason, you may be able to harvest their talents.

How to get others to draw your favorite characters

So, how do we make someone like that? If you want people to want to make you happy, first you have to make them happy.

In the first place, when talking about wanting someone else to draw your ships, there is something called “give and take.” If you just take, then you’ll be known as a “taker,” and hated for it.

I’m sure creators know this well, but the magic for making something out of nothing takes skill, time, and effort, so to be straightforward about it, it’s an incredibly big thing to ask of someone. No one wants to make that kind of effort for a taker, and they might even go so far as to avoid the requested subject matter altogether.

So, to ensure that the creators don’t feel your request is too much trouble, it’s necessary to give before trying to take. There’re a lot of creators who will voluntarily take on burdensome projects simply because they’re kind of masochistic, but there’s a kind of catharsis after working on something difficult. More than that, there are many people who are delighted by the praise from others.

If you want someone to draw your faves, then first you need to pay them in praise. For creators, you must first praise the things they have drawn. If they have drawn things outside of the fandoms you know, look those up and praise those, too. If you want someone to get interested in your favorite niche, it’s a kind of courtesy to get interested in what they like, too, right?

If it’s something the person hasn’t drawn yet, you can use the Okada Amin method of saying things like, “You know this character well, so I’m sure if you tried creating something it would look great!” or, at worst, “This has good vibes!” The first step is making the person feel good.

If you do that, then they may become curious like the cat-killing Okamura-chan and think, “I want to draw something that will make the person who’s always praising me happy,” or, “If I drew their favorite ship, what would their reaction be? (Probably squealing to death?)” Of course, killing cats is bad, but humans are OK.

Anyway, it’s important to make sure that if you want someone to draw something for you, then you must first give something to them.

However, there’s nothing worse for a creator than someone suddenly casually saying, “Excuse the sudden comment. I want to see you draw XX!” So, please be careful. 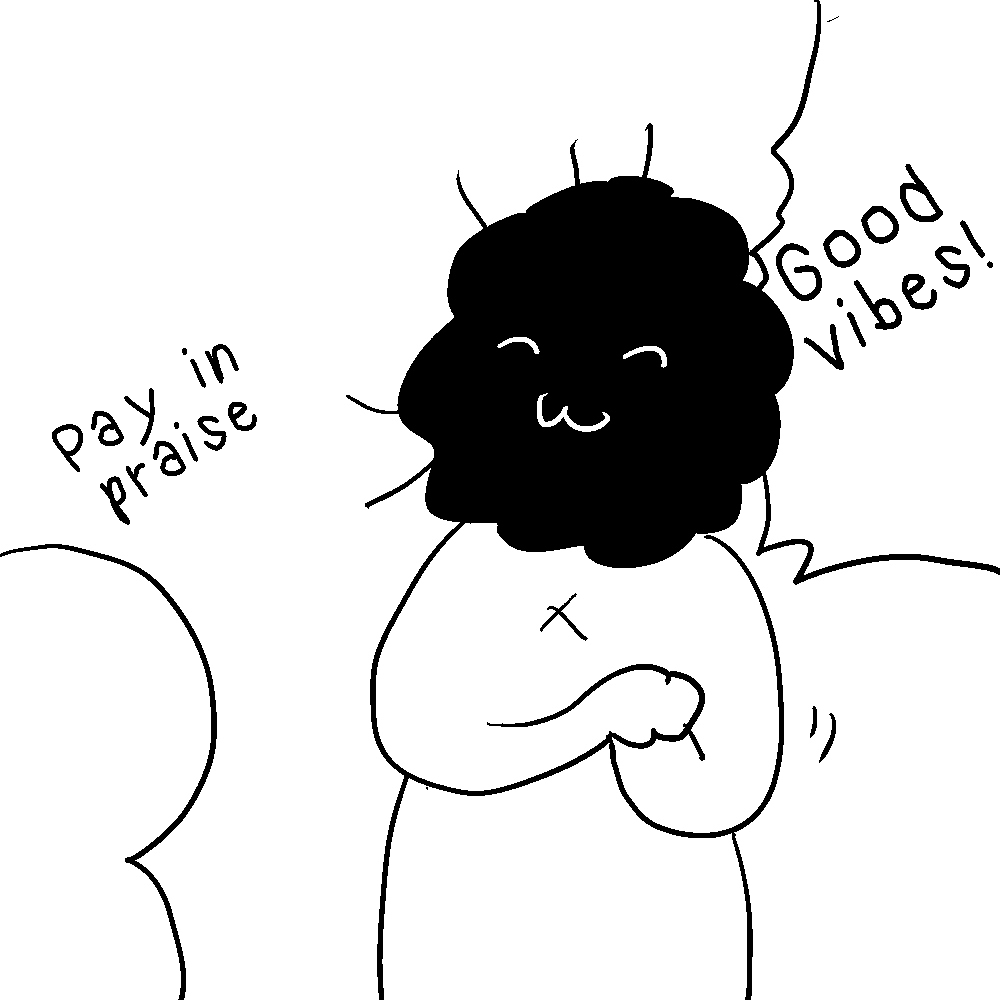 ↑ Feel free to send your troubles in languages other than Japanese, too!