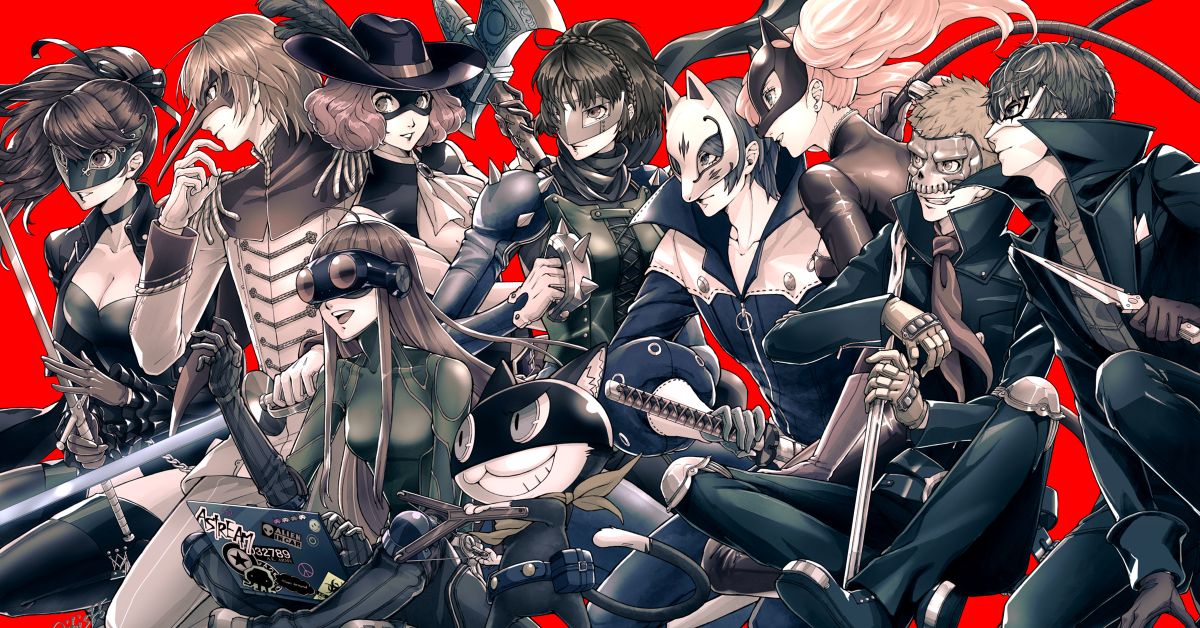 Fans of the Persona franchise are absolutely psyched for the multi-platform re-release of Persona 5 Royal on October 21, 2022. Are you one of them?

Originally released in October 2019 in Japan, and March 2020 for the rest of the world, this RPG created by Atlus revolves around a group of vigilante high schoolers who have dubbed themselves the Phantom Thieves of Hearts and traverse the Metaverse, a metaphysical realm where subconscious human desires take on physical – and sometimes dangerous – properties. There, they work to remove malevolent intent from people’s hearts.

They each have unlocked the power of a Persona, physical manifestations of their psyche and subconscious used for combat. This revamp of the original game adds a bunch of new features that are sure to delight players, like all new bosses, an extra semester to explore, and the introduction of Violet, the newest member of the Phantom Thieves.

Now, nearly two years after its global release, fans new and old can enjoy this beloved game on a number of platforms; Nintendo Switch, the Playstation 5, the Xbox One, the Xbox Series X/S, and on Windows PCs.

To help get you in the right frame of mind to delve into the fabulous and psychologically stimulating game that has received universal acclaim and stands out as the franchise’s best seller, we’ve compiled some amazing artwork featuring the P5 Royal Phantoms Thieves who’ve stolen the hearts of fans worldwide. Take a peek at the illustrations below.

A second-year high school student at Shujin Academy who was forced to transfer there and move from his hometown due to being expelled in a scandal involving a corrupt politician. As his Persona powers awaken, initially taking the form of Arsene, Joker unlocks a myriad of skills and abilities that aid him on his adventure. One such ability is the Wild Card ability which allows him to fuse together and create all new Personas, as well as control the Personas and perhaps persuade them to enter a contract with him.

A character who made her debut in Royal, Kasumi is a first-year student at Shujin Academy who transferred around the same time as Joker. She initially has a negative view of the Phantom Thieves, believing that people were becoming too reliant on them rather than solving their own problems. Through events in the game, however, she begins to see things and herself in a different light. The initial form of her Persona, Cendrillon, and her rapiers, level shotguns, and rifles, make her a worthy comrade on the battlefield.

Ryuji is Joker’s first companion who may have a bit of a short fuse but is also a nice guy. He earned a reputation as a delinquent after raising a hand to someone mocking his troubled family life, which earned him a broken leg and a suspension for the school’s track team, of which he was the star runner. User of the Persona Captain Kidd, Ryuji opts for clubs and shotguns on the battlefield.

A mysterious feline creature who is set free by Joker in Kamoshida’s Palace and has no memory of his origins. In order to be restored to his true form, he joins Joker on heists while serving as a mentor to the team on the mechanics of the Metaverse. When not in the Metaverse, however, he looks like your average housecat who lives with Joker. Owner of the Persona Zorro, Morgana dual wields a slingshot and a curved sword and boasts a number of handy abilities that help the team.

Ann is a young model of American descent who’s recently returned to Japan. Despite her personality, however, she’s shunned by her female classmates, thanks to a rumor of an inappropriate relationship between her and the gym teacher, Kamoshida. She joins the Phantom Thieves with her initial Persona Carmen, after she discovers that her best friend’s suicide attempt somehow also involves Kamoshida.

A composed and elegant fine-arts student at Kosei High School who is passionate about art and all things aesthetic and beautiful. An orphan, Yusuke is raised by his mentor and art idol Ichiryusai Madarame. Unfortunately, Madarame turns out to be nothing but exploitative and emotionally abusive to his students, draining them of their passion for the arts. This discovery leads Yusuke to awaken his initial Persona Goemon and join the Phantom Thieves with Japanese swords and assault rifles as his chosen weapons.

Makoto is Shujin Academy’s student council president, the school's top student, and is even considered the brains behind the Phantom Thieves. Analytical to a fault, there isn’t much she can’t overcome with her amazing intellect. Unfortunately, she suffers from an inferiority complex when it comes to her sister Sae, who she feels works too hard for her benefit after the passing of their father. It’s through her intelligence that she discovered the true identities of the Phantom Thieves prior to her Persona Johanna awakening. She fights alongside them with revolvers and tekko.

The adopted daughter of Joker’s caretaker, Futaba is a reclusive, genius-level computer hacker with social anxieties that have been compounded thanks to a number of traumatic experiences. Internalizing much of the abuse hurled at her from her family after being framed for her mother’s death, Futaba suffers from hallucinations and can seem to only find solace in her bedroom. After learning the truth, her Persona, Necronomicon, awakens and she aligns herself with the Phantom Thieves, mainly serving as a navigator in the metaverse.

Haru, the heiress to the Okumura Foods fortune, becomes a Phantom Theif to escape an arranged marriage her father set up by her father who she came to realize only saw her as a tool to advance his business and political ambitions. She’s the user of the Persona Milady as well as grenade launchers and axes.

A teenaged detective prodigy who’s been dubbed “The Second Coming of the Detective Prince” by the media. His skills of deduction are seemingly peerless, even being able to learn the true identities of the Phantom Thieves. Together with his Persona, Robin Hood, and his laser sabers and ray guns, he joins the Phantom Thieves in their goals. But for someone who’s so adept at solving mysteries, he seems to be shrouded in a few of his own.