How to improve your novel

Problems you often come across as an editor and your advice

── Moving on, we'd like to ask about some tricks for writing a novel, from the point of view of the publishing company. When judging the submissions for a novel-writing contest, what differentiates between a winning novel and a runner-up?

Kiwi Studio A pattern I often see in unsuccessful novels is poor plot construction. If you don’t plan out a plot that draws everything together, the overall theme will be lost. Even if you heap together a bunch of elements that you like, it will be even harder to convey the message you were trying to express.

Rusuban Studio And it’s necessary to make the progression of the story coherent with the characters’ emotions. You can't force the characters to act out-of-character simply to move the story along. If you do, the character’s personalities will lose all sense of congruency, and the story will likely unravel completely.

── What can be done to solve these problems?

Rusuban Studio I would caution new writers to take care when "designing the story." In this case, "design" refers to planning out the story before writing it. This will help resolve any problems in advance, a process that will bring about a better result. Writing a novel involves creating a story, plot, and characters. By connecting all of these elements, you can lead readers to the primary theme of the story.

Kiwi Studio It's often said that "a theme is essential in a novel," but the truth is that you can actually create several sub-themes underneath the umbrella of the main theme. If you connect the sub-themes carefully and draw them back up to the main theme in the end, it can create a very well-constructed story overall. Everything outside of the theme becomes essentially unnecessary to the story.

Rusuban Studio And I would caution those who are new to writing against getting overambitious. Focus on just portraying the character development of a single character. Ordinarily, the character is mistaken about something. As the story develops, that misunderstanding is cleared up, and by the end of the story, the character has changed through their experiences. That change, in and of itself, can be the theme of the story.

── In order to express this misunderstanding, is it necessary to create a scene where it confronts something?

Kiwi Studio   "Misunderstanding" and "confrontation" are very easy elements to use, but neither is absolutely essential in the creation of a good story.

On the other hand, if a story is "full of confrontation," that "confrontation" itself begins to lose all meaning, and it's essentially the same as if there were no confrontation at all.

The most powerful form of confrontation is the confrontation of a structure. For example, if a character believes a place is the most beautiful in the world, they could one day notice that this beauty is incredibly fragile. That which we can see with the naked eye and the truth that lies hidden beneath it are the very embodiment of "confrontation," and this kind of design gives a sense of realness to the readers.

When writing short stories, the trick is to depict the "Beginning of Change"

── For the contest you're co-sponsoring with pixiv, you're accepting submissions of short stories on pixiv. Do you have any tips for writing short stories?

Kiwi Studio Short stories usually have a word limit, so it's necessary to carefully condense the theme, plot, and characters all into a smaller story length. Writing short stories is like a blitzkrieg.

Rusuban Studio To put it in technical terms, it's easier to write longer novels with the focus on "character development" and short stories with the focus on "the effect brought about by a single event." In longer novels, you have the luxury of taking your time to portray the characters in detail. But with a short story, if you're able to use a single event to express the theme and clearly make your point in a short number of words, your story will be a success.

For this reason, I think it's more permissible to bring conflict and contrast out to the forefront in short stories. With short stories, you can’t waste words on painting the character's psychological profile, so try instead to express the character's thoughts through their actions. It's also possible to connect those actions to the theme of the story.

In short stories, it's likely that you won't be able to show the entire development of even one character. I think it's much easier if you limit yourself to portraying just the impetus, or the very beginning of the character starting to change.

Rusuban Studio I've got one more piece of advice for the authors of BL novels. I want them to try reading BL manga. What I mean is that there are many short one-shot manga that manage to portray a rich world in a limited number of pages. First, analyze the positive traits and manner of expression of a short manga that really impressed you. Then try applying these techniques to writing a story of your own. I think your result will surely be deep and impactful.

Working with a publishing company: how is it different from amateur writing?

Publishing is a project

── After the contest, what kind of support will the winners receive from the two companies?

Kiwi Studio Even if the winning story isn't perfect, there's no doubt that it will be alluring. It's my hope that we can help them tweak the structure of the story so that it will become even better, and be enjoyed by many readers.

Rusuban Studio That's right. We'll do everything we can to give them detailed feedback and advice to make their winning story even smoother and polish it to its full potential.

── What should authors be prepared for when they first interact with the publishing industry? 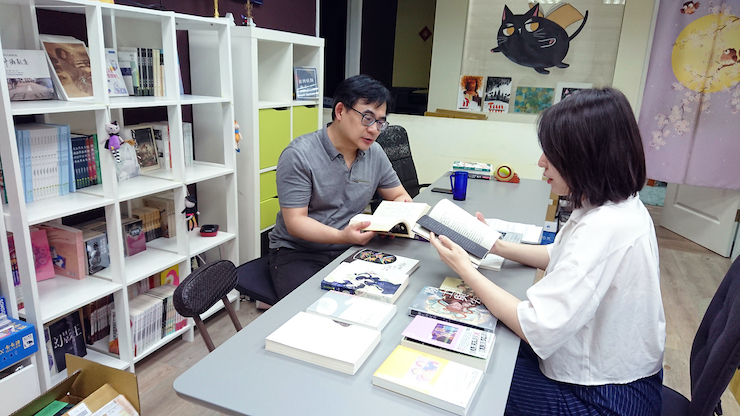 Rusuban Studio Publishing is the very embodiment of teamwork.

Nowadays, it's become very easy to self-publish doujinshi and release your work online. But you’ll be asked to surpass the realm of just a hobby when working with a publishing company. You’ll run a 3-legged race with us in order for the project to be successful.

Your editor is your first and most critical reader. In order to make your work the best it can be, you absolutely want to discuss it with them as much as possible.

Kiwi Studio I think this can be a wonderful thing, but in Taiwan, there are a large number of authors who have a lot of confidence in their work. When you're writing just for the joy of writing, everything is left up to the author. But when it comes to published novels, it’s necessary to interact with the publisher, readers, and society as a whole. So it's in your best interest to take advantage of the publishing company's knowledge and experience. Other than just printing books, we can also provide support with everything related to publishing and market research. We've earned our stripes through lots and lots of hard-won experience. (laughs)

── Is there any possibility of further collaboration between the contest winner and the publishing company after the contest has ended?

Kiwi Studio Absolutely! We're looking forward to it! If the winning story is well received, the chances are good that the winner will also be approached by other publishing companies, so I'm really glad that the authors are able to get such an amazing opportunity.

── Won't it be bad for business if other publishing companies approach the author you discovered?

Rusuban Studio I think of us publishing companies like athletes throwing a ball.

If, after the contest, the author ends up performing on a different stage and setting their eyes on even greater heights, isn't that even better? That's what's most important, the enjoyment of writing.

If the author enjoys themselves and keeps writing, they'll go on to create many wonderful stories. If we want to create a book with them, we'll just have to keep tossing them balls. You never know, we might get the chance for an impressive slam-dunk.

Not long ago, the winner of the first Hot Taiwan Taste contest that we recently held with HALFTONE PRESS CO., LTD. (黒白文化出版社) ended up receiving an offer of work with another company as well. 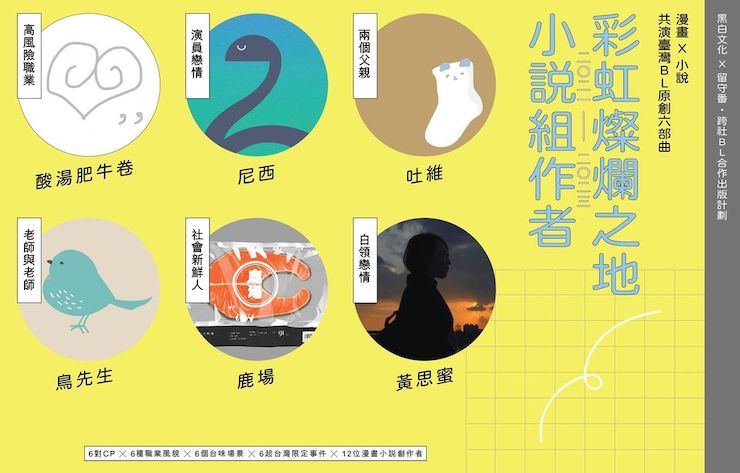 ▲ A manga and BL novel collaboration entitled "The Place Where Rainbows Shine" in partnership with Rusuban Studio and HALFTONE PRESS CO., LTD. (黒白文化出版社).

In the not-so-distant future, we'd like to introduce Taiwanese novels to the world

── Thank you very much. Finally, do you have any messages for aspiring authors?

Rusuban Studio The discussion about "Taiwanese-ness" ended up being quite long! (laughs)  This kind of discussion, however, is exactly what ends up solidifying what various individuals feels constitutes a "Taiwanese feel," so I enjoyed it very much.

Kiwi Studio Pop culture encodes all sorts of things, and makes it easy to propagate them via the media. However, I don't get the feeling that Taiwan is very used to this just yet, so I want to keep working on this process.

Rusuban Studio We would like to become cultural exporters.

If this contest continues, by the 5th time it's held there will be 10 Taiwaese BL novels, 20 if you include Kiwi Studio's yuri novels. Then it will be possible to make them into a series. This is our ultimate objective. New things are happening in Taiwan! We want to let as many people as possible know about it.

For this contest we're holding a short-story writing contest with pixiv, and we're also working with the TV drama production company DaMou Entertainment Co. Ltd. (大慕影藝) to provide the possibility of a full-length novel as well as a TV drama remake. We're looking forward to everyone's wonderful submissions!

── Due to your collaboration with pixiv, we can look forward to many more opportunities for Taiwanese novels in the future, isn't that right?

Rusuban Studio Pixiv is based primarily in Japan, so we have high hopes that it will serve as a contact point for creation between Taiwan and Japan.

It's our hope that the participants will make use of all of pixiv's features during this collaboration, and in the future, it will become a platform where Taiwanese creators can freely post and view. 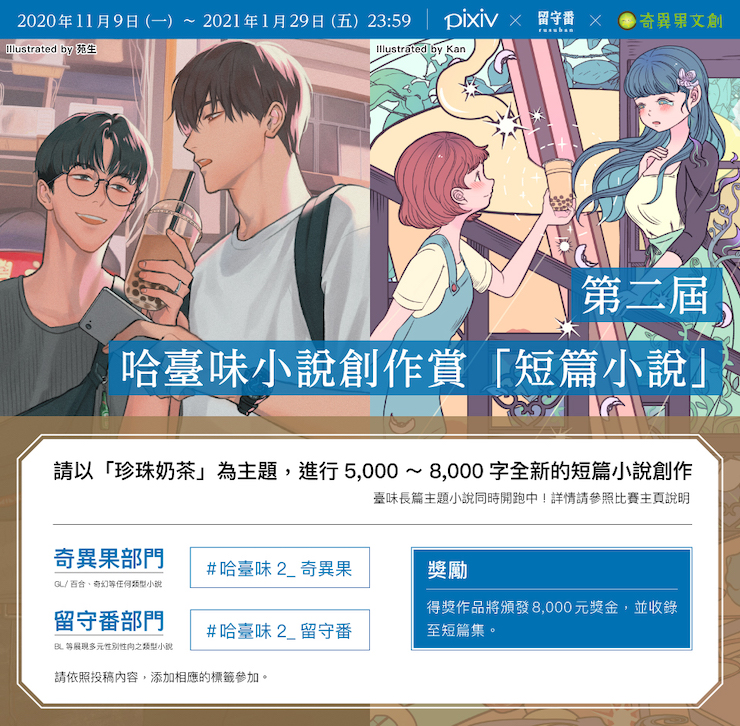 Working together with two publishing companies in Taipei, Rusuban Studio and Kiwi Cultural and Creative Co., Ltd., we're holding a writing contest for short stories written in Traditional Chinese based on the theme "Tapioca Milk Tea." In addition to prize money, the winner will be given contracts from both companies for their story to be included in short-story collections.

Write a short story of 5,000 - 8,000 characters about the theme of "Tapioca Milk Tea". After following all the criteria for the category for which you're applying, post it on pixiv novel with the tags provided for your category.

* For more details about this contest, please visit the contest page below.