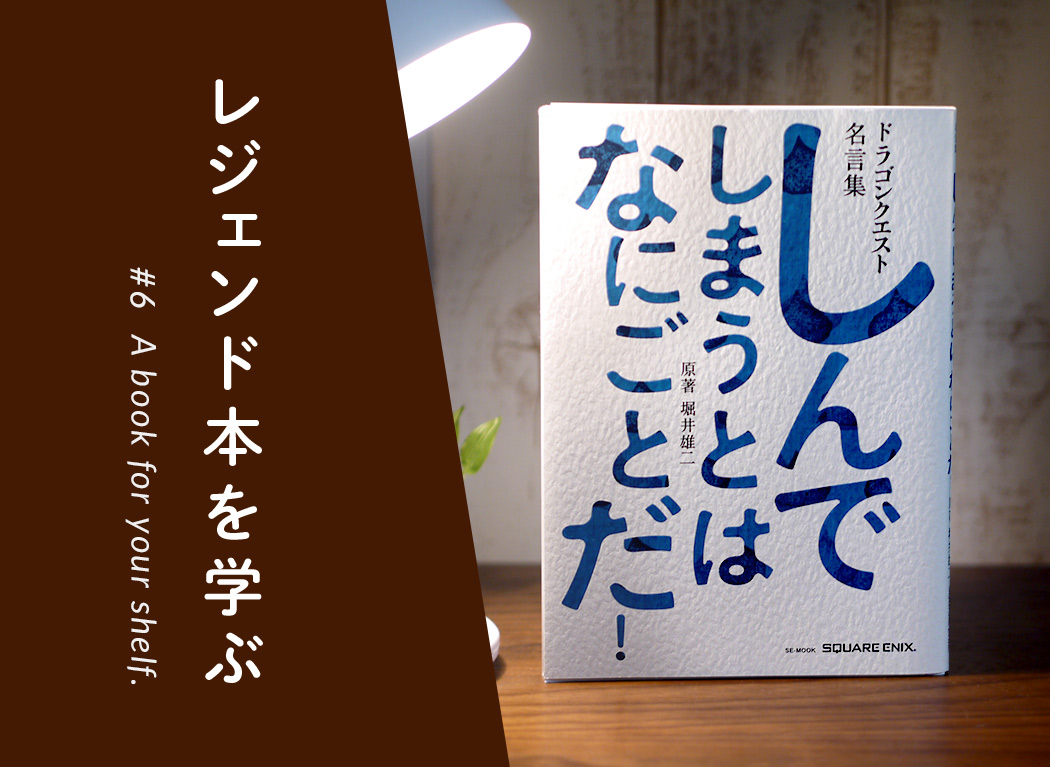 In the column "Learning from the Books of Legends" we feature our recommended books from the most popular creators in the entertainment world. Illustration, anime, manga, video games... Learn what's behind your favorite series and much more! 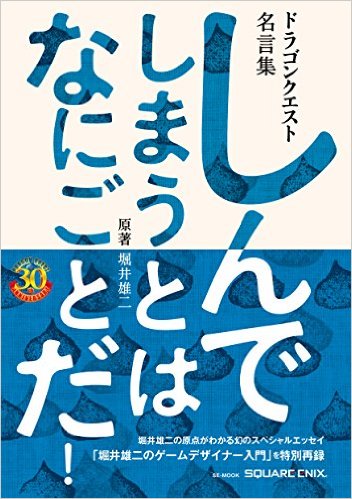 Dragon Quest is a very popular Japanese RPG video game series. The first instalment came out in 1986, while the 10th and last one, Dragon Quest X, came out in 2012. Video game designer and scenario writer Yuji Horii can probably be referred to as the biological father of the series.

Horii's ability with words is one of his most noteworthy characteristics. He had the chance to train his sensibility with words during his years working as a magazine editor. Before engaging in the Dragon Quest series, he created stories and scenarios for mystery adventure games such as Portopia Serial Murder Case (1983) and Okhotsk ni Kiyu: Hokkaido Rensa Satsujin Jiken (1984).

Horii's talent with words was once again demonstrated in Dragon Quest. The whole series features a huge amount of memorable quotes, that made their way into the hearts of its fans.

Today we chose 4 of the most representative quotes from Dragon Quest I (Dragon Warrior in North America), between the ones personally chosen by Horii himself in his book Shinde Shimau To Wa Nanigoto Da!
Let's present each one of them and ask Horii for a little comment. 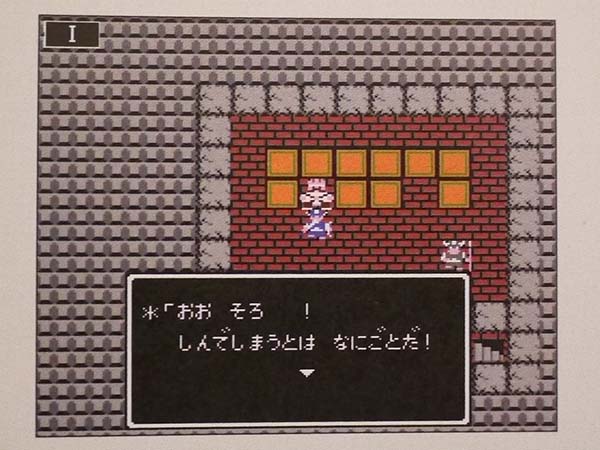 These are the words the king tells the protagonist shortly after he's resurrected after dying on the battlefield. Have you ever heard of any other game with a 'game over' quote like this one?

Dragon Quest is a role playing game, so its goal is to make the players enjoy themselves through immersion into the video game world.

In most video games, after the player dies he's going to be welcomed by an impersonal "GAME OVER" window, and the lack of consistency with the game will make them go back to the real world abruptly. This might also make them want to stop playing the game out of frustration.

But Dragon Quest has its king resurrect you, look at you with disappointment and tell you the words "You died on us!". The player doesn't even have the time to detach themselves from the game, and this sense of continuity and coherence is what makes this role playing game so different and unique.

By avoiding impersonal "GAME OVER" windows, the player can sit back and enjoy being immersed in the story. This is one of Horii's essential narrating techniques.

The many restrictions behind words

Many of our readers are probably wondering why is everything written in hiragana.

This is far from a stylistic choice: back in the day, in fact, it wasn't possible yet to use kanji due to the limited quantity of data a game software could contain.

At the time, the maximum data capacity was 64KB. If we compare this to the present day, it wouldn't even be enough data for a single digital picture. You could use the 26 letters of the alphabet and 50 hiragana characters. More complicated characters were recreated by assembling different hiragana symbols. Horii also restricted the numbers of katakana they would use to 20, according to the frequency of use. 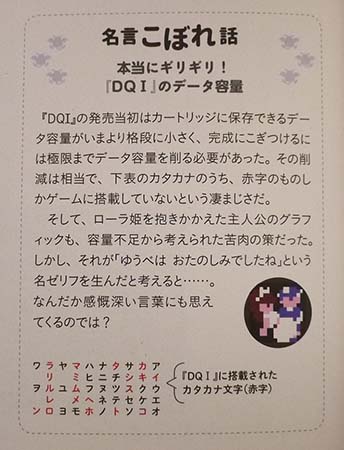 ▲ Yuji Horii's "Dragon Quest Quotes - Shinde Shimau To Wa Nanigoto Da!" (Square Enix, 2016) p.11
Normally, if the goal was to keep the amount of data (hence the amount of characters) to the minimum, one could probably have omitted the "Oh ___!" sentence altogether. However, doing so would have resulted in nothing but an impersonal 'game over' screen, a pure and simple game mechanic, and the game would have lost much of what makes it Dragon Quest. 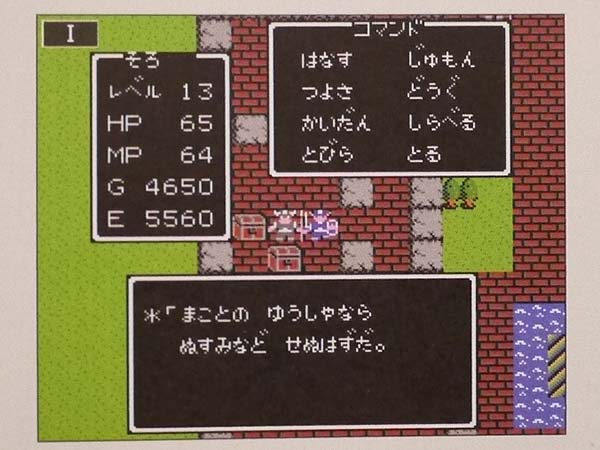 This is a sentence a guard tells the player when he enters in the castle's treasure room. This quote itself is not linked to the main plot of the game, and the event simply occurs when the player is about to take something from the box the guard is protecting. The final effect is somehow unnerving to the player, like if the guard read through his heart. 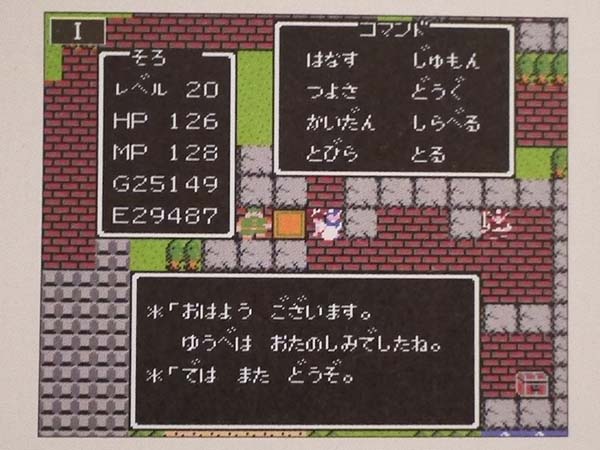 This sentence is displayed after the protagonist rescues the princess and spends the night together with her at the inn.

Thanks to an excellent choice of words, the perception of this quote changes according to the player's age and experiences.

This is what Horii says about this line in his book.

(Note: The original Japanese quote can literally be translated as "I was looking forward to last night". In the North American version it became "Thou hast had a good night's sleep I hope.", and in a later Game Boy Color remake it was changed into "You were up late!", which includes the original ambiguous nuance.)

After the protagonist rescues the princess and brings her back to the castle in Dragon Quest I, it was impossible to get two characters to display at the same time. So we replaced the character sprite with another one that looked just like he was holding the princess in his arms. When I saw the replacement character, I thought I wanted them to spend the night at the inn together... And that's how this quote was born. (laughs)

This line has the same effect as the one we've seen before about the treasure room. It shakes the player, because it looks like the game itself already knows what your intentions are or what you thought you did.

Even though we had to omit a lot of contents due to the data restriction, keeping Dragon Quest I really simple, these 'literary devices' let the player immerse himself into the story and live the adventure inside the game as his own. 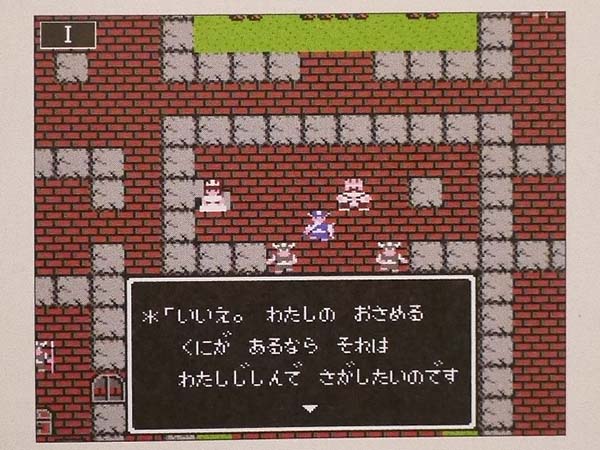 ▲ Yuji Horii's "Dragon Quest Quotes - Shinde Shimau To Wa Nanigoto Da!" (Square Enix, 2016) p.16
The last quote we'd like to introduce is the one the player is presented after he saves the world and is asked to become the next king.

In the Dragon Quest series, to let the player identify him/herslf as the protagonist, their lines don't appear in the game.

This is why, when the protagonist pronounces these words at the very end of the game, it leaves a huge impression. The protagonist finally speaks his mind, to say he doesn't want to become a king: he wants to go on to another adventure.

We can say this is the message behind the game: using a metaphor, Horii tells the player that Dragon Quest I might be over, but now it's the player turn to find their role in the world - and not just the role people think is good for them.

This is purely a supposition, but we're sure there's a message behind this quote.

Pay attention to the recipient, not to the style

Horii's great use of words and smart techniques are without any doubts some major elements that contributed to the success of the Dragon Quest series.

It's easy to think that writing a game without possessing a proper style and unique ways of expression would be quite hard, but as Horii says at the end of his book, the most important thing is the attention to the recipient. Rather than one's writing ability, what's fundamental is to be able to communicate exactly what you want to, so that the readers can enjoy your contents.

It's good to be conscious about "how will readers perceive this", rather than about sense and style. To think about the reader's feelings. Horii says being "attentive" is at the very base of any other writing technique.

Attentiveness is necessary in every form of creation. By proactively trying to predict what the recipient will think about our work, we can get better at expressing our unique view of the world.

"Learning from the Books of Legends" INDEX

#5 Depth that Incorporates even Meaningless Randomness into Its Design: METHODS by Mamoru Oshii: Production Notes from “Patlabor 2: The Movie” - Learning from the Books of Legends