Is there a creative aspect in ‘fictional banknotes’? 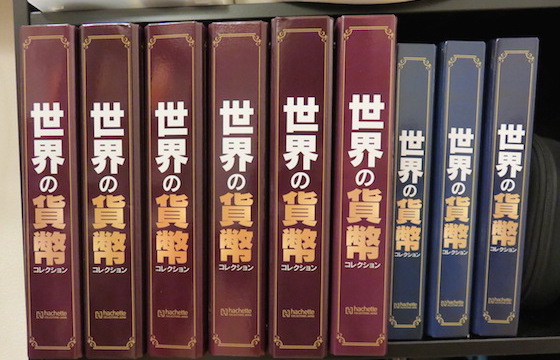 A collection of ‘World Currencies’ that olo showed me during the interview.

- You have a day job but is there a possibility that you would make your fictional banknote work and research full-time?

It would be interesting if it did (laughs) but I don’t possess such expertise. On top of that, there aren’t many people that makes fictional banknotes so I can’t begin to imagine...

Though there’s someone who has done it before.

It’s an artist named Masahara Futoyu, who made artwork based on banknotes. He also does advertising work. Besides him, Genpei Akasegawa also comes to mind. Mr. Akasegawa is, simply to say, an artist who was found guilty to be printing 1000 yen notes.

Mr. Akasegawa was found guilty based on producing and printing the 1000 yen banknote, using it on various creations of his which violated the “1894 Law Controlling the Imitation of Currency and Securities”. During the ongoing trial, he also made what was called the ‘zero yen banknote’.

Photos of banknotes in books would have ‘specimen only’ written on them. While on the “zero yen banknote”, “actual banknote” (本物) were clearly stated (laughs). To snub people further, there was the word “revolt” (造反) which made this creation more and more as a sign of defiance.

It’s ironic when he said “if it’s a real zero yen note, then printing them won’t be a problem”.

Later, a magazine published an exact replica of the 1000 yen banknote stating it’s a “pattern of the 1000 yen that you can make simply by printing it” and someone tried using it at the cinema. The magazine’s editor was arrested which made quite a stir.

- Mr. Akasegawa must have felt the same way (laughs) Even Mr. Futoyo’s work has been aimed at the society with a certain message in mind.

Yes, but I have no desire to do such a thing. Though in response to society’s backlash(?), I came up with a book called “Observations of Creating Realistic-looking Fictional banknotes”. (laughs) 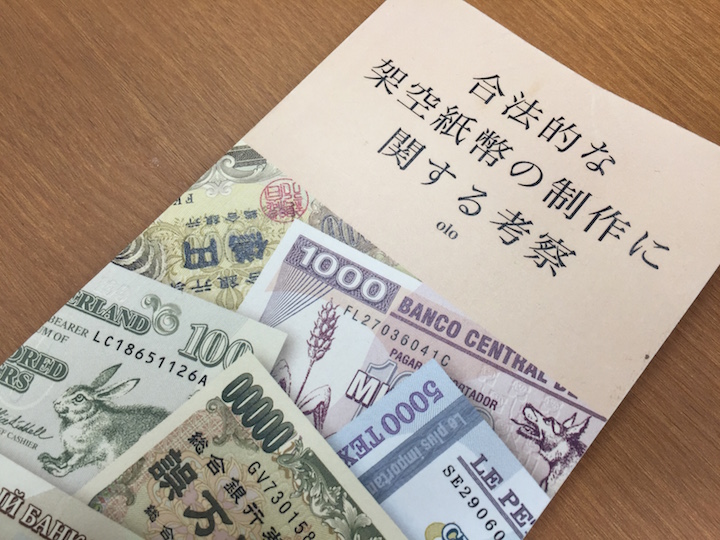 - It’s interesting to note that the works of yours, Mr. Akasegawa and Mr. Futoya are based on banknotes but they don’t look like they were made by the same individual.

The final product will look the same at first glance but the difference probably lies in what we wanted to do and also, our line of thought.

Mr. Futoyu used actual banknotes and traced them for his work but I use copyright-free materials for my creations which won’t be a problem in terms of ‘rights of use’. This also enables me to approach it differently.

- In Part 1 of the interview, you mentioned your love for the design of banknotes as well as researching what makes them look like ‘money’ as the driving force behind making fictional banknotes.

Yes. I have also liked “fake things” since I was young.

So, in order to experience burning or breaking something, first I would have to ‘make a fake replica that looks real and destroy that instead’.

I remember thinking of such a thing when I was very young...

- You’ll usually hear of a straightforward reason, “I want to destroy something” but this sounds like an intelligent child! (laughs)

It was purely ‘destroying’ something which meant I gradually lost interest and simply fell back to liking fake things. I used to make FLASH animations but they were all parodies.

I thought of tinkering with other people’s work but if I do so, it’ll infringe on their copyrights and it might hurt the creator’s feelings as well. That’s why I wanted to make spoof news and play with that instead.

As a highschool student, I remember realizing that if I made something that’s too similar to the real banknote that “it’ll be against the law”. What if I made something fictional that shares the same feeling and similarities with the real-life counterpart and that the law wouldn’t apply to it? Which is what brought me to where I am.

- This way, “while showing respect to the actual material and playing with the fictional counterpart” could be used for other works too.

Next Page : What does it mean to share your works online?
123