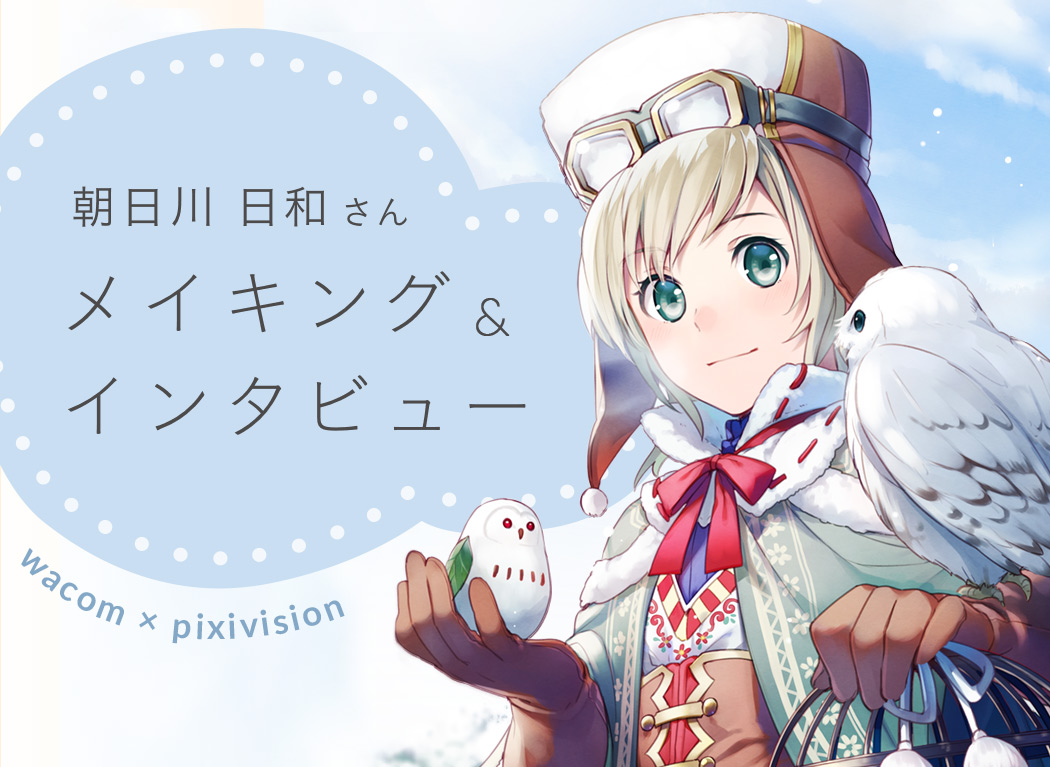 Hiyori Asahikawa is an illustrator for light novels and children’s books, as well as trading card games, known for her vivid, colorful drawings as well as her attractive characters with expressions that are full of life.

Her clients include publishers, game companies and even local municipalities. Her having decided to become an illustrator during third year of middle school, and now being an accomplished artist in the industry, we asked her about her beginnings as well as her future plans.

The first half of the article shows the making of one of Asahikawa’s drawings using her preferred software, PaintTool SAI. The latter will be an interview, in which we hear what drawing means to her and what she would like to do in the future. You can also watch the process of Asahikawa creating an illustration using the new Wacom MobileStudio Pro 16 tablet! (video below) 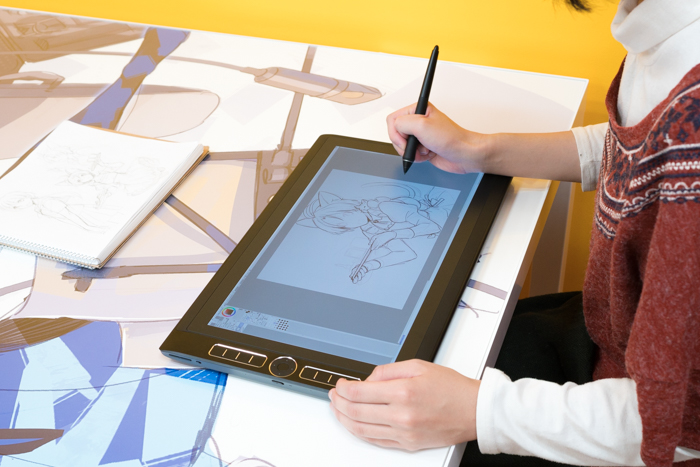 We start with the rough for today’s drawing. In the theme of the new year (an aside: the article was written in December), Asahikawa decided on a new year’s celebration illustration. However, she wanted to go with something different from the usual Japanese traditional motif.

Since a bird is the zodiac animal for 2017, Asahikawa decided to make “an owl-tamer girl” the theme for the drawing. Wanting to accent the winter-y theme, she also added an owl-shaped snowman, hoping to show a friendly atmosphere between them all. 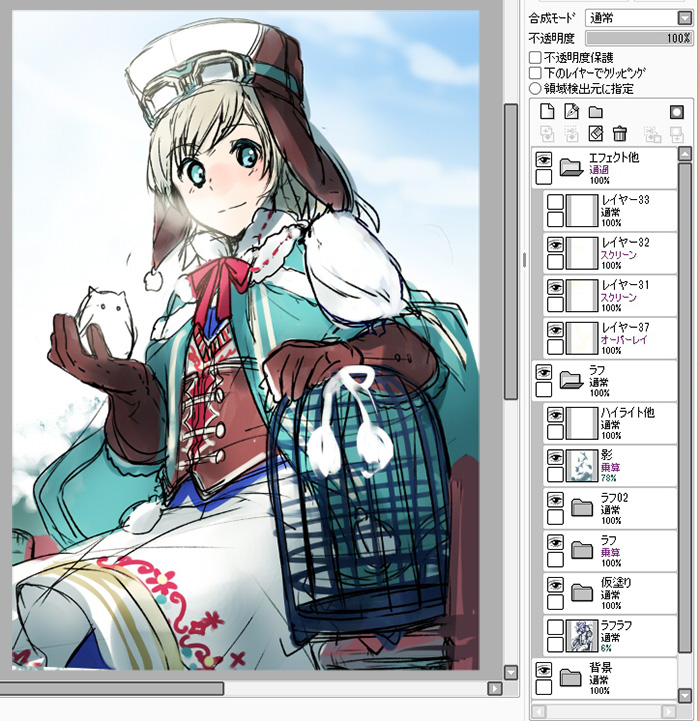 It’s important to have an established outline even from the rough stage as to not lose direction later, and so she carefully mapped it out with the subject and setting in mind. Since color illustration are colored during the rough stage, both line art and coloring was done at this stage. 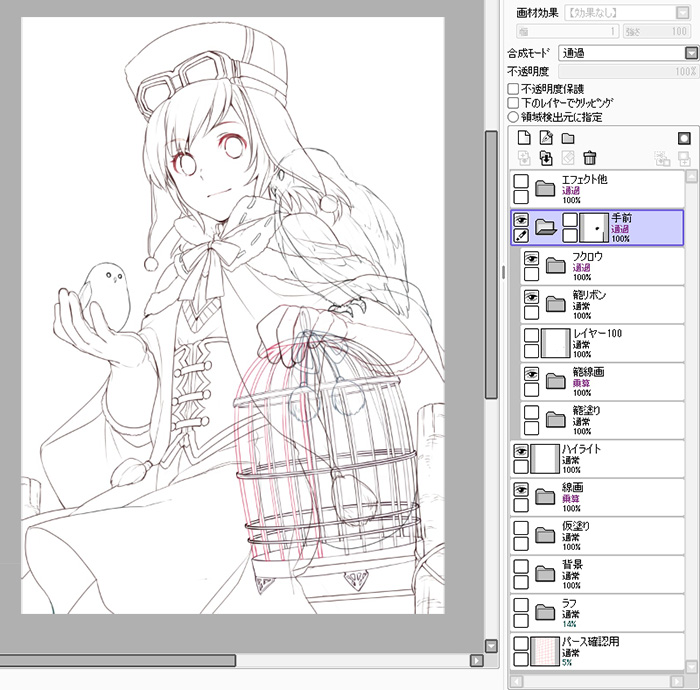 With the image being fully sketched out, we begin creating the lines. Since, for the owl and birdcage, we may use different line widths in addition to making finer alterations, we’ll create a separate layer for them from the girl. As well, the shoulder area (the part that would be covered by the owl) was still drawn, just to be safe. 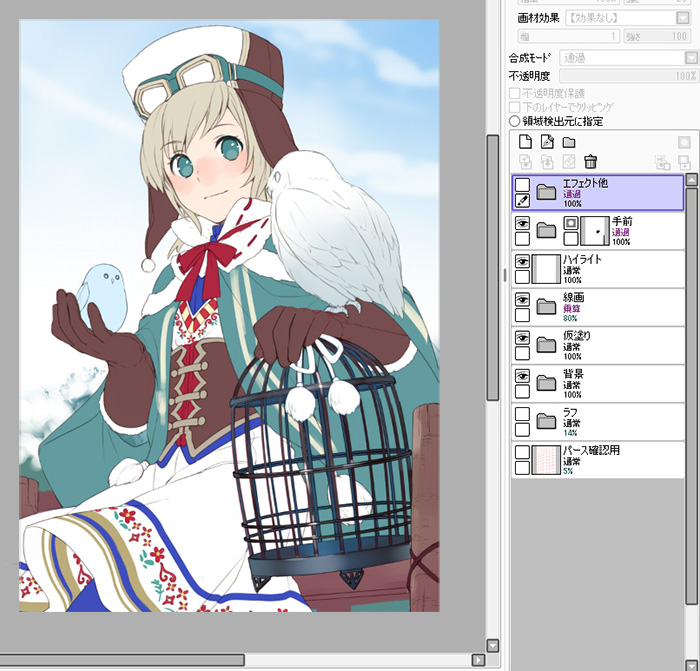 With the coloring we added during the rough as a foundation, we begin to add color to skin, hair, etc. We also add and erase patterns to the clothes here, though they also get changed around during the later full coloring stage as needed when adjusting the overall picture’s balance and composition. In addition, for the birdcage, we put a mask over the wooden parts and other time-consuming areas for now. 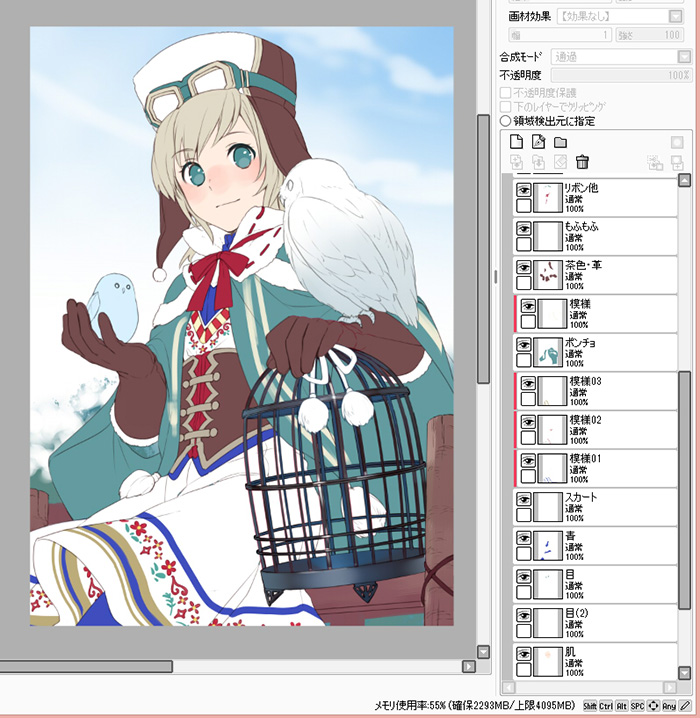 At this stage, we separate the sections into different layers. The more carefully we divide up the picture, the easier it will be to edit them later. 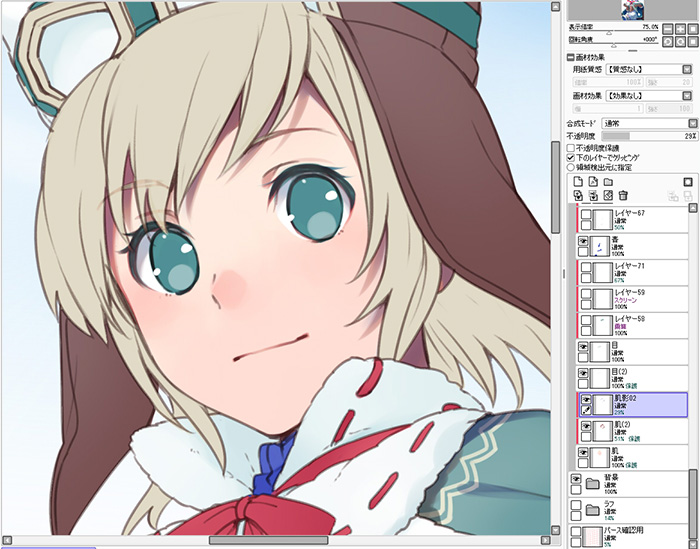 We shade the skin darker where there is supposed to be shadow, and we also add shadows for the hair. 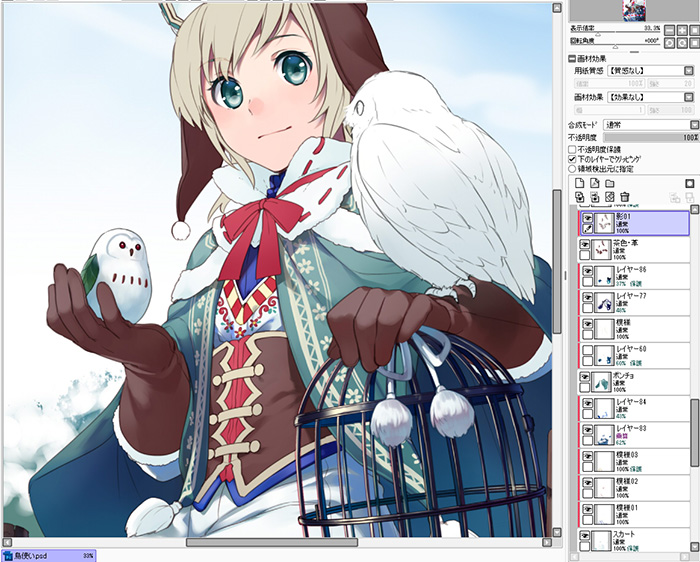 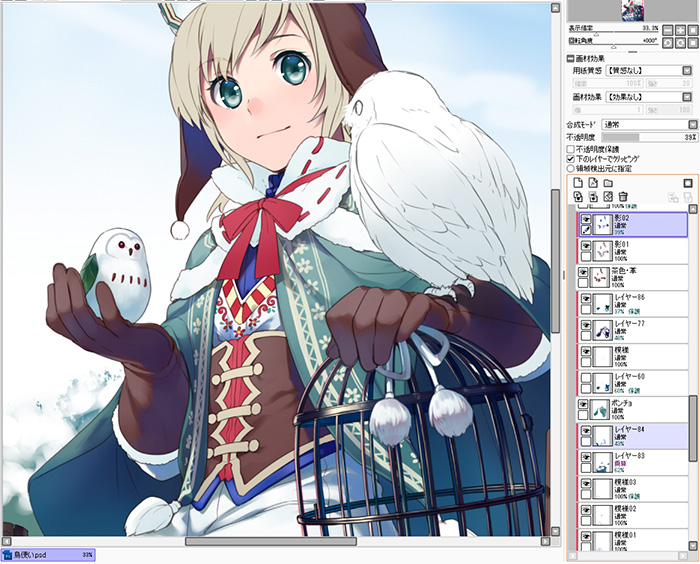 After creating the layers for all the parts and applying color to them, we can now focus on shading. After first using darker versions of the color in certain areas, we then add a deep blue layer to adjust the opacity and augment the 3-D effect. The blue used here can also be adjusted as necessary for the picture’s theme and atmosphere--for today’s purposes, we’re using light to dark blues. 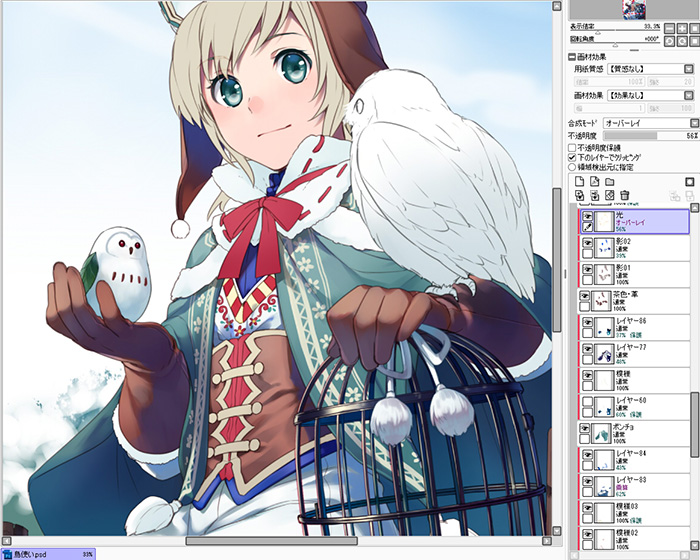 We want more 3-D “pop” to the picture, so we’ll lastly add an overlay to make the lit areas even brighter. We also apply the same coloring to the owl that we did to the girl. 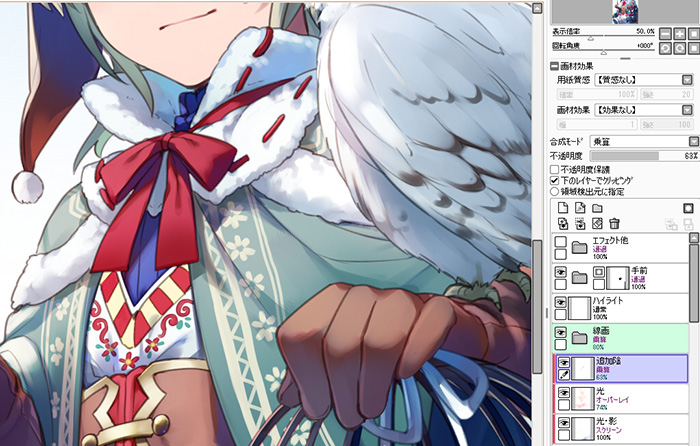 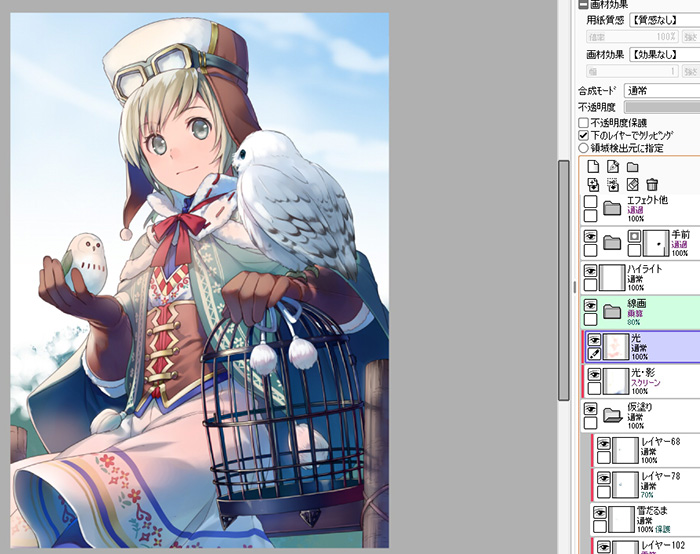 Once the coloring is more or less finished, we do a final adjustment taking the balance and composition of the whole picture into consideration. As said above, we would use an overlay to brighten and darken areas as necessary, but there’s the possibility we may end up overdoing some areas along with it. For this piece, so that we don’t wash out the color in the poncho area, we’ll use “multiply” to tweak the shading there. 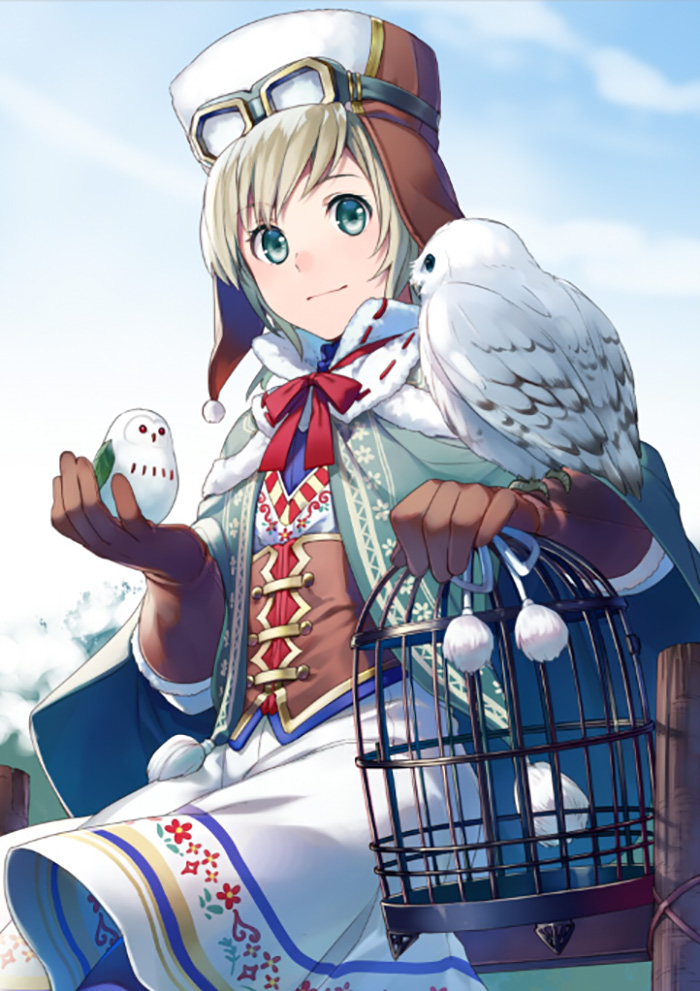 And that’s it for the girl and the owl! Next is the background. 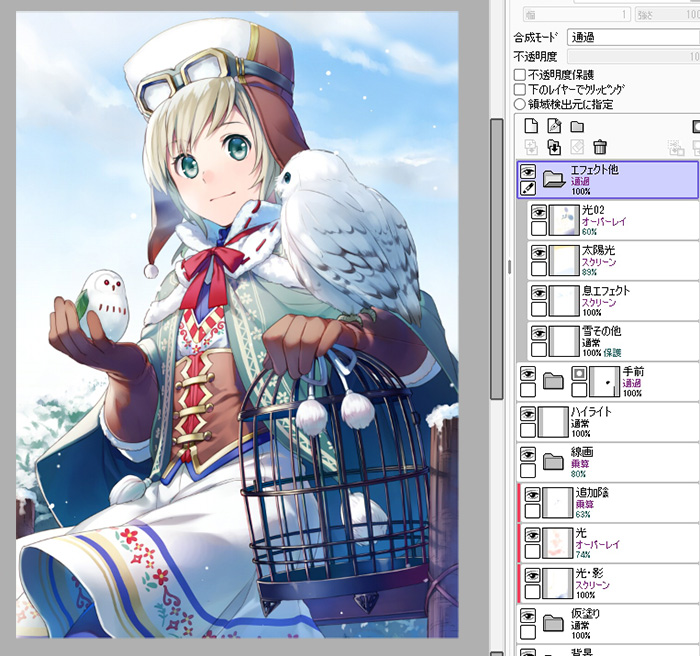 Asahikawa normally gets stuck trying to decide on the background, but the colors laid out in the rough turned out surprisingly well, so it was decided to go with those. Trying to preserve the wintry color palette, trees and snow were added in.

As well, effects like the sunrays and the breath fog were added at this stage, all while tweaking colors here and there for the picture’s overall balance. 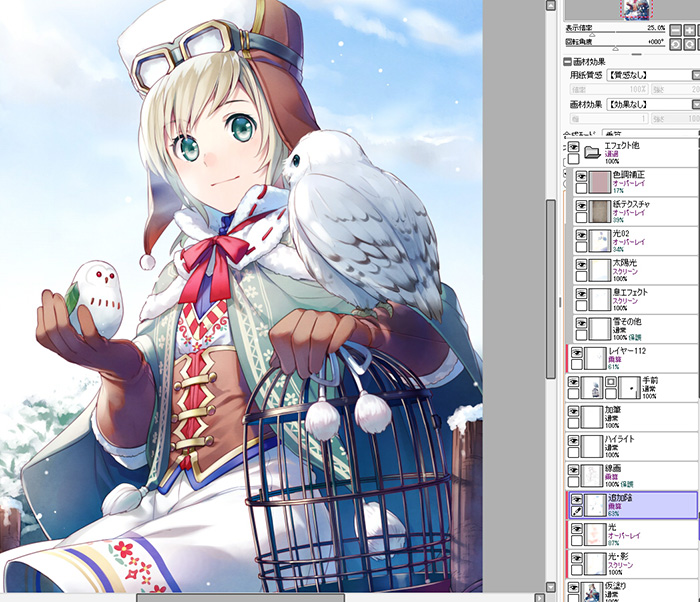 Asahikawa’s partial to drawings that have a hand-drawn look and feel to them, so, to that effect, we use an overlay to add textures to the entire canvas, then touch and add shades and lighting accordingly. Since a lot of detail is being added or worked on at this stage, it involves a great deal of patience and fortitude. 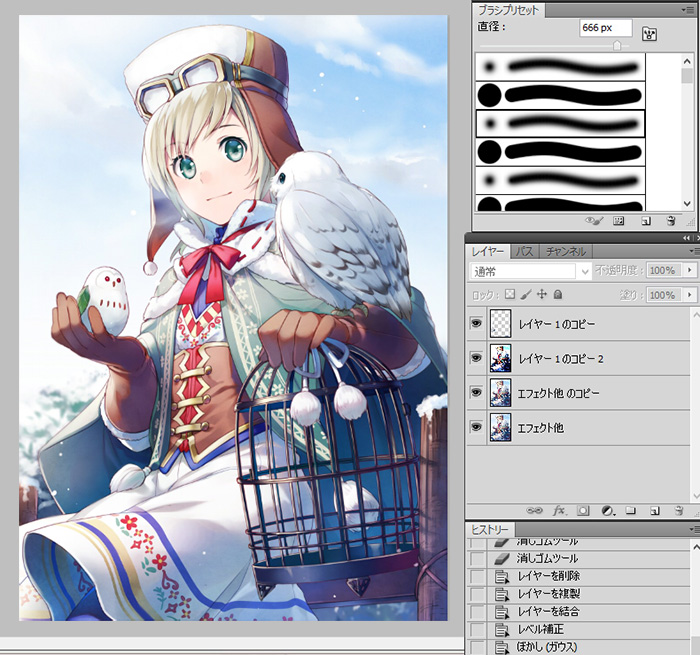 After achieving the desired result with PaintTool SAI, we then adjust levels using Adobe Photoshop. We didn’t do it this time, but you can also add lens and bokeh effects to the background. 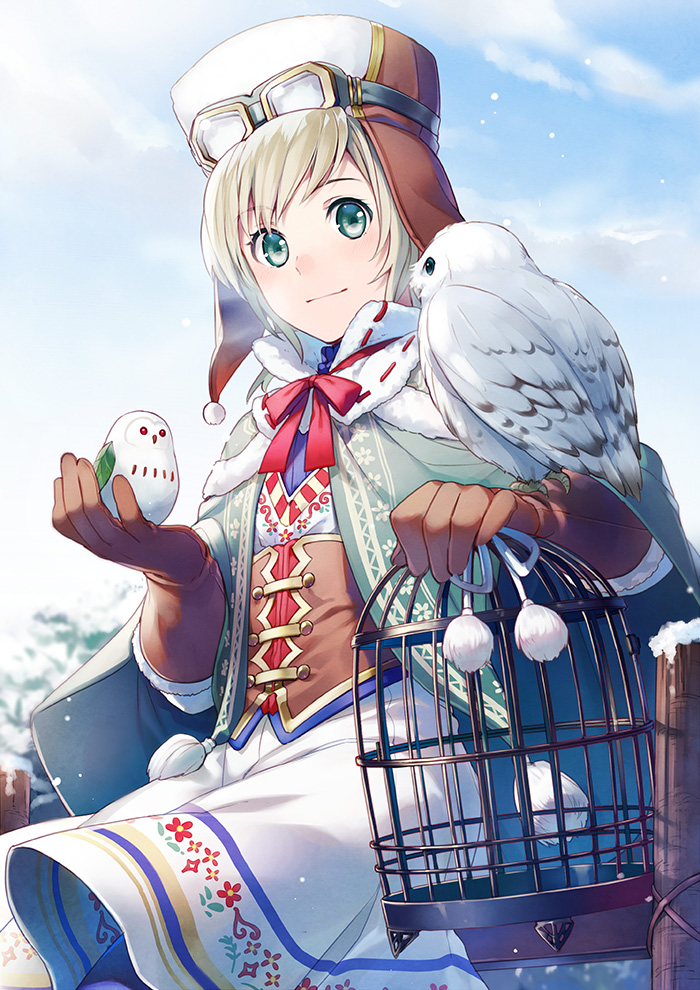 The drawing is complete!

From rough to finishing--while working on other projects--the whole process took one week. Actual work time, we estimate, was around one day.

Though it can be tempting to charge through the entire process in one go, it’s invaluable to take breaks and step away from the drawing every now and then. Keeping fresh eyes and objectivity will cut down on moments that make you go “Shoot!” when doing the finishing touches.

Next up, we have find out just what made Asahikawa want to become an illustrator, as well as what themes she would like to work on in the future.

At the end of the article, we have the making-of video of the drawing Asahikawa made using the Wacom MobileStudio Pro 16!

Next Page : Draw everything you can in order to express yourself
12