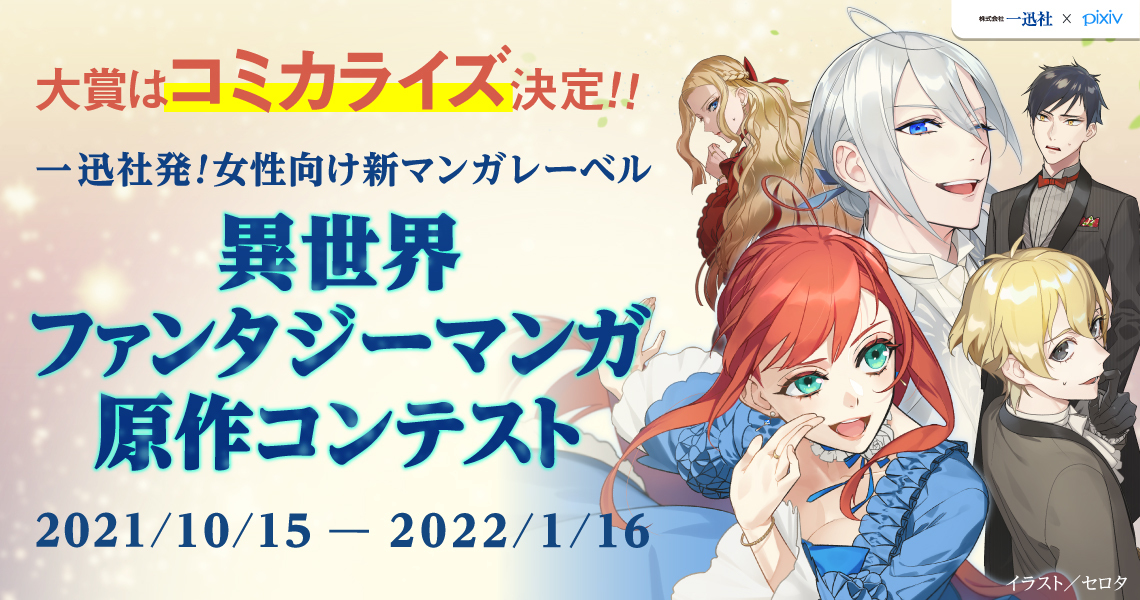 pixiv and Ichijinsha have joined forces to launch a new manga imprint completely dedicated to Isekai fantasy manga for women.
To celebrate the inauguration of the new imprint, pixiv is holding a manga original story contest!

But what is Isekai fantasy for women, besides one of the most popular genres out there? What features do these works share, what makes this genre so in demand, and what should you focus on when writing an Isekai story?

We asked Fujiwara, Shitara, and Kato, editors for comic POOL's Isekai fantasy division and creators of the new imprint, what makes the Isekai genre so exciting.

Isekai fantasy for women encourages you to be yourself

── How did the new comic imprint come to life?

Fujiwara: We've been working on comic POOL, a comic label in collaboration with pixiv, and with the rapid increase of Isekai fantasy works for women, we decided to launch a sister imprint to encourage the expansion and flourishing of the genre.

Fujiwara: Manga targeted at women have grown rapidly in the past four years. We have published novels and manga adaptations such as My Next Life as a Villainess: All Routes Lead to Doom!, which became a big hit. Nowadays, works get commercialized faster and faster.

── What are the key features of Isekai fantasy for women?

Fujiwara: In the case of Isekai fantasy targeted at a male audience, the basic idea is that by being reincarnated in another world, you gain abilities and a status that would've been impossible to achieve in the real world.
On the other hand, works targeting women tend to feature contexts where the protagonist manages to get along with other characters by being their true selves and using their own set of skills. The hero overcomes hardships through behaviors and actions that are but an extension of the real world, and ends up loved and cheered on by everybody. They're able to turn the situation in their favor using their integrity and dedication. In this sense, this genre resembles shoujo manga.

Shitara: Another key feature is that many stories tend to begin with an unfortunate situation. The hero has to face adversity (a route that leads to doom, a broken engagement, or being forced to marry) but they immediately manage to turn the situation around. Many of the protagonists pursue their own identities. Instead of getting caught up in misfortune, they just try to be themselves regardless of the circumstances, and as a result, they inspire people who end up converging around them. One of the appeals of the genre is also that it encourages you to be yourself.

── It works as an affirmation for all otaku ladies out there.

Shitara: If fulfills people's ideals.
Also, the momentum and tempo of the story, which, as I said earlier, builds up from an unfortunate situation, make for a pleasant read. That's probably another reason why Isekai is so popular.

Kato: You can expect certain patterns from Mary Sue stories, so readers feel that if they liked a certain work, they'll like the next one too. I believe this sense of security has also led to the rise of the genre as a whole.

Fujiwara: Even while certain patterns surely exist, the world of Isekai fantasy is deepening and unraveling as people enjoy the differences and individuality of each work.

── This time's contest is split into two categories: "works about noble girls and saints" and "works about Chinese aristocracy and Japanese brides". What are the main characteristics of each sub-genre?

Fujiwara: The most popular sub-genre in Isekai for girls is the one that features young women from good families, and a few of them, like My Next Life as a Villainess, focus on anti-heroes. The second most popular sub-genre includes stories of female saints, such as The Saint's Magic Power is Omnipotent. These also start out with adversities such as broken engagements and exile. As for Chinese aristocracy, for example, we can mention Futsutsuka na Akujo dewa Gozaimasu ga (Eng: Though I am an Inept Villainess ~Tale of the Butterfly-Rat Swap in the Maiden Court~) ー our company was in charge of both the novel and the manga adaptation. And for stories involving Japanese brides, Watashi no Shiawase na Kekkon (Eng: My Blissful Marriage) has been a big hit.
Shitara: Futsutsuka is a story about an outcast who has lost her noble status, but this doesn't stop her from living her best life. It's a trope that can be found in several Isekai fantasy works. It also reflects in the arranged marriage genre: at first, the marriage wasn't what the protagonist was hoping for, but she still finds happiness in it. Both turn adversity into contentment.

── From what you said, it seems like romance plays a key role in Isekai fantasy for women.

Fujiwara: That isn't necessarily true. In this particular genre, the hero values getting along with everyone around her, solving problems, and living freely more than she values falling in love, so romance doesn't have all that much weight. That's where it differs from shoujo manga. In this sense, Isekai fantasy resembles RPGs or otome games, where you have to complete quests and missions to improve the situation or avoid walking down the path that was set for you in your previous life. To achieve your own happy ending.
Love stories can be a bit stressful as they depict the obstacles and problems that can occur before you get together with your fated one, but the lack of romantic elements solves the issue. Yet another reason why this genre's on the rise.

── So what matters is not causing stress to the reader.

Fujiwara: Isekai works for women also emphasize the cheerfulness and positivity of the main character; if the hero has time to worry, then they also have the time to actually take action. Getting along with everybody in the real world can be trying, so in this sense, the alternate world in Isekai works is the ideal one.

A different world, but still down-to-earth

── The contest announcement emphasizes how entries should have a happy ending. Ending aside, are there any other features that make an entry more suitable for commercialization?

Shitara: Works should have likable protagonists. A proactive hero with fortitude makes people want to cheer for them. They should be gentle, yet unwavering and firm in their opinions.

Kato: I think most readers are attracted to a protagonist who's able to just be themselves.

── The setting might be that of a different world, but the characters and story should be very much down-to-earth.

Fujiwara: It's an ideal world, yet realistic. Even though the story is set in another world, it shouldn't be too outlandish; what the main character gains from their adventure is realistic, and what the reader wants is realism. Keeping this in mind can help you create a wonderful work of literature.

── Does this mean that writers can write about any kind of world they want?

Shitara: What matters, in the end, is to create a world that makes both the author and the readers say: "I wish real life was like this!" 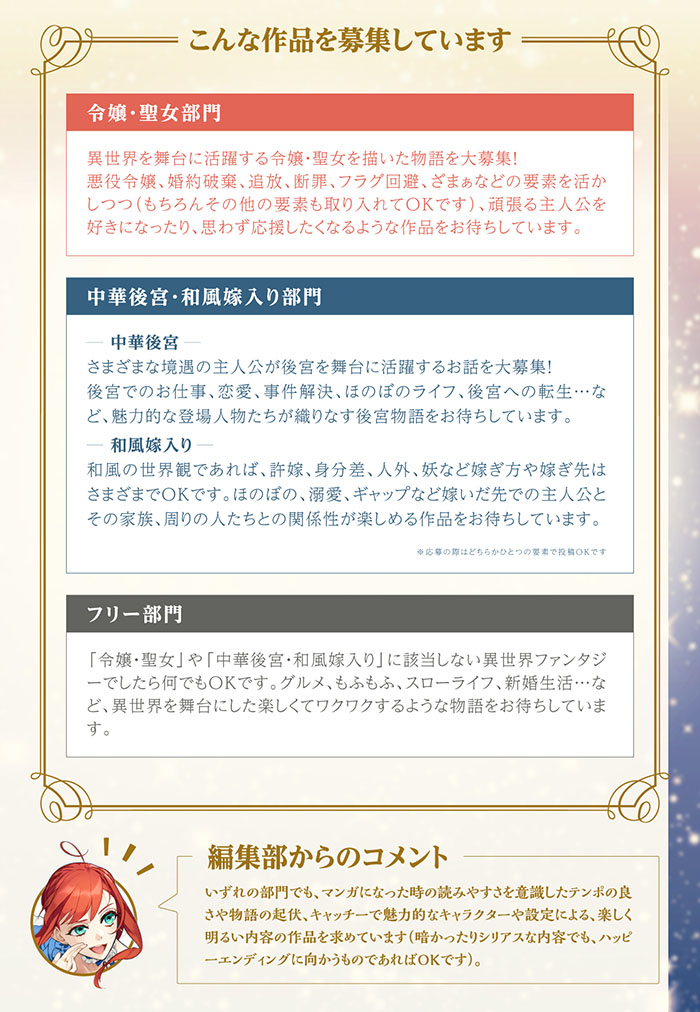 The contest's outlines for each category.

── Why did you choose specific sub-genres for the contest's categories?

Fujiwara: By narrowing down the categories, we took the risk of getting fewer entries. However, not setting some categories would've made the contest too vague.
We chose the most popular sub-genres, namely works about noble girls and saints, but we also picked a couple of themes that are on the rise: Chinese aristocracy and Japanese brides. In this day and age, this will prove a valuable opportunity to introduce more genre variety to the world. Of course, the contest also has a "free" category for those who want to submit works in other sub-genres.

Shitara: The categories are specific to the genres that our manga imprint would like to release and focus on in the future.

Fujiwara: I feel there'll probably be a higher concentration of entries in the "noble girls and saints" category, so I think works in the other category will have a better chance to be commercialized. The harder the task, the greater the reward.

── This contest calls for original novels that can also work as manga. How is the writing process different from regular novels?

Fujiwara: The premise of the contest is that some works will be chosen for manga adaptation, so authors should think about whether their story will work as a comic. Of course, writing skills are crucial since they're what drives people to read your work, but coming up with charming characters and interesting storylines is way more important.

── What kind of story works well as a comic?

Shitara: Adapting a work is easier if the original novel already describes the characters' personalities in detail. Characters are what separates a title from the others, so that's one of the elements that make a story befitting of a manga adaptation.

Kato: If the characters have a well-defined personality, it's easy to expand on their actions once the novel becomes a manga, for example by figuring out how they'd behave in a certain situation.

Shitara: When creating a character, you've got to think of their behavioral principles.

Fujiwara: ...Which means the reasons or motivation for that character's actions. It could be their nature or disposition. Moreover, it's essential to accompany attractive traits with elements that induce sympathy in the reader. Characters shouldn't feel too close or too far ー they should be an object of admiration, but also life-sized.

── Do you have a message for those authors who are debating entering the contest?

Kato: If you're even slightly interested in the topic, I hope you'll take the plunge and submit your entry. It might be a chance for you to expand your world.

Shitara: To the people who aren't confident enough to enter because they feel like they're aiming too high, I recommend starting to write without thinking too far ahead. If you keep your stories to yourself, there's no way of knowing whose interest they may pique; you have to get people to read them. I hope you'll take advantage of this opportunity to expand the range of your creative activities.

Fujiwara: Isekai fantasy for women is a genre that offers great opportunities. This is your chance to create a work within the framework of a prominent genre such as Isekai fantasy, and, in a good way, even pretty easily. I hope you'll give it a try, especially if you're a fan of Isekai fantasy yourself. 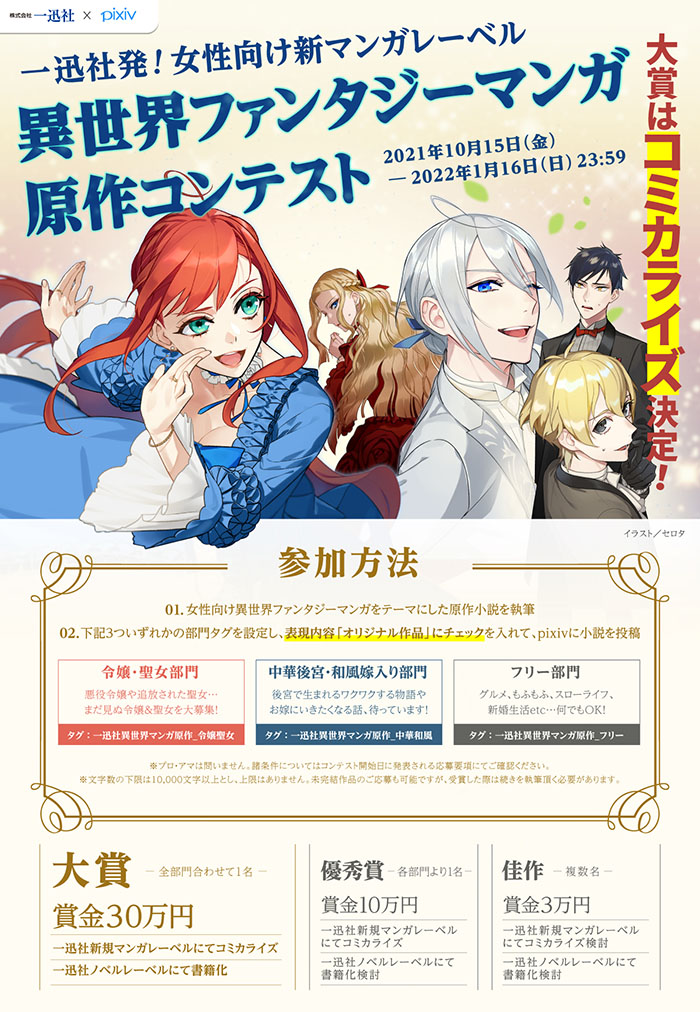 Ichijinsha, who we interviewed for this article, is now accepting submissions for original novels in the genre of Isekai fantasy for women!

The first prize winner will receive a cash prize of 300,000 JPY (approx. 3000 USD). Moreover, their novel will be published under the new Ichijinsha novel imprint and get a manga adaptation under the company's new manga imprint!

Other remarkable works will also be considered for publication and manga adaptation.

The deadline for submissions is January 16, 2022. We are looking forward to the entries!

Note: All contest entries must be written and posted in Japanese.

>>Check out the contest page (in Japanese)<<